Psoriasis awareness month is designed to inform the public about the chronic long-term skin disorder. Here we've compiled a list of up-and-coming treatment options offering hope to psoriasis patients including the like of Kim Kardashian 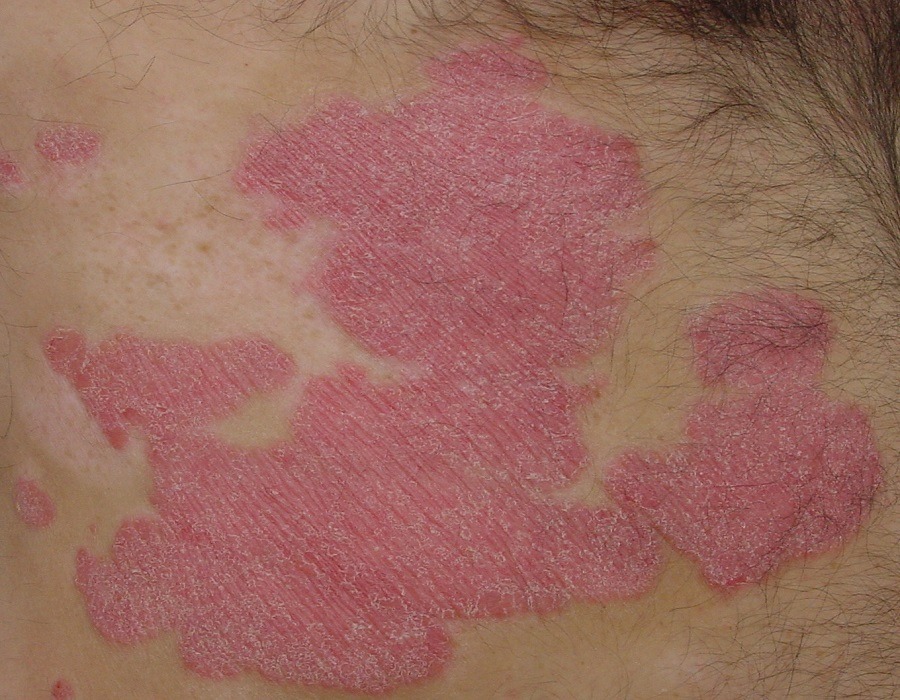 August is Psoriasis Awareness Month, a skin disorder that causes skin cells to multiply up to ten times faster than normal, leading to a build-up of bumpy red patches covered with white scales (Credit: Wikipedia)

To mark psoriasis awareness month, NS Medical Devices takes a look at the latest technology and drugs designed to combat the chronic illness that affects a person’s skin cells.

Significant progress is already being made with a series of high-profile campaigns to educate the public about the disease, along with research to find effective ways to treat it with the fewest possible side effects.

Many actors, singers and athletes, including Kim Kardashian, Phil Michelson and Cyndi Lauper have used their various platforms to call for more people to be educated about this common disease, which is not contagious but often misunderstood.

Many of the celebrities have opened up publicly about how psoriasis has impacted their lives, providing a voice to the approximately two to three percent of the global population struggling with the disease.

These scales, called plaques, tend to occur because of an increased production of skin cells, which are usually replaced every three to four weeks, but with psoriasis the process typically takes just three to seven days.

It is classed as an autoimmune disease, meaning the immune system becomes overactive and attacks healthy cells by mistake.

To develop the disease, a person must have a combination of the genes that cause psoriasis and be exposed to external “triggers.”

Triggers include stress, injury to the skin, such as a tattoo or a scrape, smoking and certain infections.

Dr Dan De Rosa, Chair of NHS Wolverhampton CCG, said: “Psoriasis is usually a minor irritation for most people but it can have a significant impact on quality of life for those more severely affected.

“Quite often psoriasis symptoms start or become worse because of a certain event or trigger.

“Possible triggers of psoriasis can include an injury to your skin, throat infections and using certain medicines.”

According to the non-profit organisation the National Psoriasis Foundation, almost 125 million people in the world have some form of psoriasis.

It often appears between the ages of 15 and 25, but can develop at any age.

Studies also show that between ten and 30% of people with psoriasis also develop psoriatic arthritis, a condition characterised by joint pain, stiffness and swelling.

A report titled Economic Burden of Psoriasis in the United States published in The Journal of the American Medical Association, revealed the annual direct and indirect cost of psoriasis amounted to approximately $112bn in 2013.

It’s a method that uses natural and artificial light to treat the condition, typically prescribed by a dermatologist for a patient with moderate to severe psoriasis, or psoriasis that has not responded to other treatments.

The non-invasive process involves exposing the skin to ultraviolet (UV) light on a regular basis and under medical supervision.

It can reduce the size, itchiness, and appearance of plaques and could even clear them up entirely, however it does not completely cure the recurrent inflammatory skin condition.

A study titled Phototherapy with Narrow-Band UVB in Adult Guttate Psoriasis, found that narrow-band UVB treatments are effective against a rarer form of psoriasis called acute guttate psoriasis, and that people were satisfied with this treatment.

According to the Institute for Quality and Efficiency in Health Care based in Germany, using light therapy to treat psoriasis results in noticeable improvement or a complete reduction of symptoms in between 50 to 90% of people.

There are many ways to deliver light therapy for psoriasis, including varying types of light and equipment.

A key difference between the various forms of phototherapy is the type of UV light used in treatment, UVA has a long wavelength that can access deeper levels of the skin.

UVB — the most common form of phototherapy — has a shorter wavelength which is limited to reaching only the upper levels of the skin.

Ra Medical Systems CEO Dean Irwin said: “The Optimized Pharos is a next-generation laser that delivers what dermatologists have been asking for: faster treatments for psoriasis, vitiligo, and atopic dermatitis and an upgraded user and patient experience.”

The new device features an ergonomic handpiece to offer comfort for the operator as it’s intended to improve both physician and patient experience.

The device also comes with adjustable aiming and laser beams in order to enable targeted treatments without affecting healthy tissue.

“With Pharos, I achieve clinical success clearing plaques and re-pigmenting lesions that have not responded to other treatments.”

The Food and Drug Administration (FDA) has recently approved a number of new drugs that can be injected to target the immune system. This could significantly improve the quality of life for people with psoriasis.

Known as biologics, it can be injected under your skin or into a vein.

The medication is for patients experiencing moderate to severe symptoms as it could clear plaques and reduce joint damage in people with psoriatic arthritis.

Different biologics work in different ways, but they all target cytokines, a type of protein that the immune system produces.

Cytokines are blocked as it brings on the cell growth, overproduction and inflammation in psoriasis patients.

Currently, all biologics are taken by injection or IV infusion, but researchers are beginning to develop oral tablets that target the right parts of the immune system.

An example of an injectable drug to treat moderate to severe plaque psoriasis in people who have not improved with other treatments, which received FDA approval in February 2017 is the Brodalumab.

It works by blocking a certain natural protein in your body called interleukin-17A that may cause inflammation and swelling.

Brodalumab could lead to reduced plaque thickness, redness and scaling.

The AMAGINE trial programme that involved 4373 patients with moderate to severe plaque psoriasis published in the British Journal of Dermatology revealed how patients treated with Brodalumab had significantly higher rates of complete skin clearance.