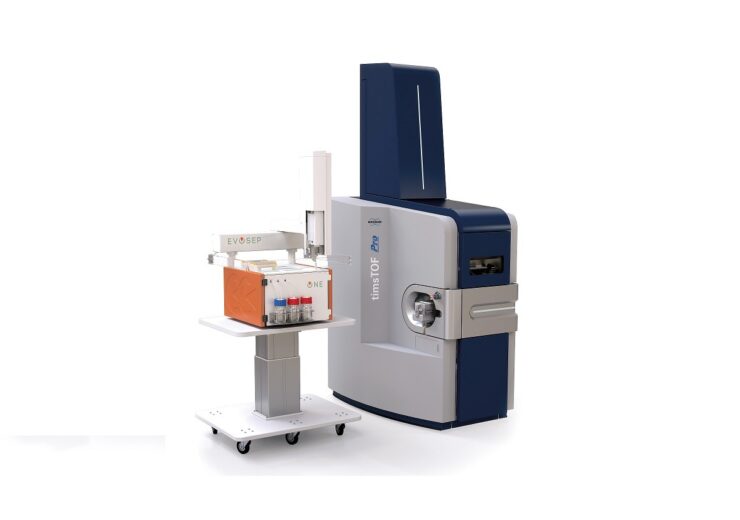 These advances have been demonstrated by the Mann-group in a paper by A. Brunner et al., which is now available on Bioarchive at https://www.biorxiv.org/content/10.1101/2020.12.22.423933v1. Key results include the first untargeted and unbiased analysis of true single cells achieving an identification depth of up to 1,500 protein groups from single FACS-sorted and individually digested HeLa cells. This remarkable sensitivity was achieved by the combined Evosep–timsTOF platform using crucial innovations.

Two new ultra low-flow methods on an otherwise unmodified Evosep One system offer 100 nL/min gradients that lead to approximately 10 times higher sensitivity than gradients at 1 µL/min, confirming theoretical expectations. These new nano-flow methods, using the Whisper™ flow technology, have the same low overhead as the other established Evosep One methods, and offer a throughput of either 20 or 40 samples per day. They make single-cell analysis robust, as shown by the analysis of 420 single cells that were analyzed on the same column. The workflow retrieved known and unexpected proteins changing abundance upon chemically arresting the cell cycle at discrete points.

Also crucial for achieving ultra-high true single-cell sensitivity was a new modified timsTOF mass spectrometer that included a new, brighter ion source with associated modified ion optics. These precommercial innovations on the timsTOF platform were combined with the newly developed dia-PASEF® 1 scan mode, wherein a large percentage of all peptides are sampled in an unbiased manner. The study provided further evidence of the advantages of data-independent analysis (DIA) for short LC gradients or extremely low abundance samples, such as single cells. Even for these single cells, the quantitative reproducibility was high in this novel Evosep–timsTOF workflow.

The authors performed an in-depth comparison to cells analyzed by single-cell RNA sequencing by two different technologies, allowing them to distinguish technical vs. fundamental biological differences between the proteomes and transcriptomes. This revealed that single cells have stable core proteomes with sufficient protein copy numbers to permit meaningful quantitation, whereas the transcriptome appears to behave more randomly, presumably because of low copy numbers of many mRNA transcripts per cell.

The principal investigator behind the Bioarchive article, Professor Matthias Mann at the Max-Planck Institute of Biochemistry, stated: “The sensitivity and robustness to truly analyze single cell proteomes is becoming a practical reality. We are now able to routinely measure cohorts of single cells, and quantitatively assess single-cell states to reveal new cell biological information. The Evosep One and timsTOF Pro have been pivotal to enable and scale these true single cell measurements, making it also a suitable platform for single-cell proteomic biomarker discovery and quantitation work.”

Bruker’s Vice President of Proteomics, Dr. Gary Kruppa, noted: “I am very excited about the new quantitative, true single cell study. This is another great example of what the timsTOF platform can achieve, and a further cell biology breakthrough facilitated by the dia-PASEF method. We anticipate providing the new ultra-high sensitivity timsTOF technologies to early-access collaborators in the second half of 2021 on dedicated single-cell proteomics systems, and we plan for full commercialization in 2022.”

Dr. Nicolai Bache, a co-author on the study and Head of Applications at Evosep, concluded: “This type of robust single cell analysis is an important step towards enabling proteome analysis and digital pathology in everyday clinical diagnostics. We are very happy that the Evosep One stands to make a significant contribution to this promising new area.”