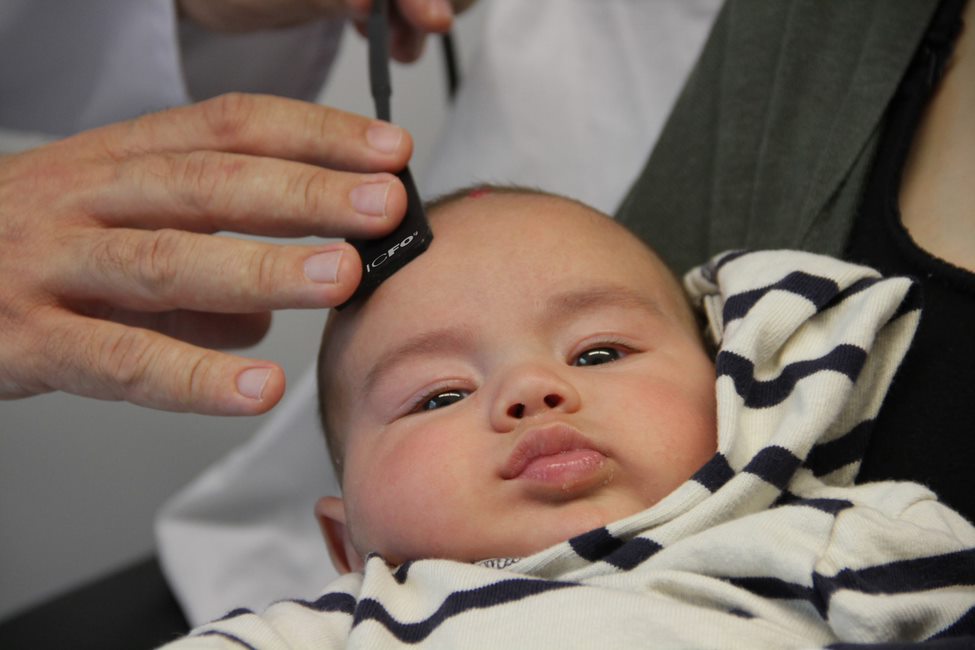 The TinyBrains consortium currently has the ability to scan one or two spots on a baby's head (Credit: ICFO)

A medical issue after birth is every new parent’s worst nightmare, but sadly it’s a reality for some. One risk factor doctors look out for is neonatal heart defects that can alter oxygen levels in the blood, and while there are devices that help them monitor this, as of yet there is no reliable way to ascertain whether the lack of oxygen is causing brain damage. Professor Turgut Durduran explains to Peter Littlejohns how scientists from the TinyBrains consortium hope to bring such a capability into hospitals using infrared light.

It’s hard to imagine the tiny heart of a baby undergoing surgery, but each year 3.4 million are born with a congenital disability, with congenital heart defects (CHD) the most frequent.

About 40% of these infants need a cardiac surgical intervention during their first year of life, with a subsequent stay in the intensive care unit (ICU), and an estimated 500,000 are left with long-term brain damage.

Most of these babies survive to adulthood, but risk suffering from deficits in their neurological development due to brain blood flow and perfusion alterations happening during the intervention.

“These babies have a serious heart defect that occurs while they’re still in utero, so during development they already have a problem,” says Professor Turgut Durduran, a physicist and the project coordinator of the TinyBrains consortium.

“When they have to rely on themselves to breathe and pump blood all over their bodies after they take their first breath, it’s well-known that they suffer brain damage.”

For many years, the focus of practitioners was simply to save lives by taking care of the heart, and according to one 2016 meta analysis, this approach has led to 83% of babies with a CHD who underwent medical, surgical, and intensive care interventions surviving infancy in the US.

Beyond this, the long-term survival rate is not well researched, but what is well-known beyond the TinyBrains consortium is that damage to the brain caused in the neonatal stage by low blood-oxygen levels can result in long-term conditions that range from learning difficulties to epilepsy.

How a CHD causes brain damage, and how life-saving interventions can worsen the injury

The heart’s primary function is to deliver blood to different parts of the body, receiving deoxygenated blood into its right atrium, where it’s carried to the lungs through the pulmonary arteries and exchanges carbon dioxide for oxygen in a process called pulmonary circulation.

From here it passes back into the left atrium of the heart and is subsequently pumped around the body providing oxygen and nutrients where they’re needed.

But there are several supporting processes within this simplified explanation that can be hampered by a CHD, and the result is that not enough oxygen, nutrients, or a combination of the two, reach the areas of the body in which it’s needed.

The brain is especially sensitive to being deprived, and when starved of oxygen and nutrients, especially soon after birth when it is still developing rapidly, brain damage can occur relative to the amount of cells that die.

Depending on how localised the death of these cells is after cerebral hypoxia – the medical term for a brain starved of oxygen – the event frequently causes irreparable damage.

According to UK brain damage charity Headway, some parts of the brain are more vulnerable to a lack of oxygen than others, including the cerebral cortex (especially the parietal and occipital lobes), the hippocampus, the basal ganglia and the cerebellum.

Depending on where damage occurs, the charity says outcomes can vary dramatically.

For instance, Damage to the cerebral cortex, the cerebellum and the basal ganglia may lead to limb weakness and disturbances of movement, balance and co-ordination – whereas injury to the frontal lobes can cause issues of executive dysfunction, problems with personality, lack of insight, mood swings, problems with anger and depression.

In cases where a CHD requires complex surgical intervention, hypothermic bypass techniques – which involve cooling the body – are used to make cannulation easier and decrease the duration that blood is exposed to the bypass circuit that effectively acts as a life-support machine during surgery.

Additional benefits include decreasing the inflammatory response of the immune system and a bloodless, uncluttered surgical field on which to operate.

But according to some experts, inducing hypothermia may increase the risk of brain injury, with variables that include the duration of total circulation arrest, the depth of hypothermia, the rate and duration of core cooling, pH management during core cooling and the level of hemodilution.

With so much literature out there on the impact of CHDs on long-term brain health, TinyBrains formed to illuminate the mechanisms at play in neonatal brain damage and give practitioners a tool they can use to monitor oxygen levels, enabling them to act fast to reduce or even prevent injury where possible.

Currently, MRI scans can be used for this purpose, but there are significant risks involved in transporting a baby prior to or during surgery that involves bypass techniques.

“An MRI requires transporting a baby that may be on life support, and there also shouldn’t be any motion, which means they have to anaesthetise the baby,” says Durduran.

“Every time you do this you’re increasing the risk to it.

“In my studies early on I used to transport babies to MRI machines before surgery and there was a person next to them pumping a ventilator – a very complex and delicate procedure.”

At a more macro level, the cost of anaesthetising and scanning repeatedly can be significant, meaning that there is a public health benefit to creating a less-risky alternative to monitoring neonatal brains.

As it happens, TinyBrains believes it has come up with a risk-free alternative, using two photonics techniques – high-density near-infrared spectroscopy (fNIRS) and diffuse correlation spectroscopy (DCS).

One principle behind the device the consortium is looking to create is similar to that of a pulse oximeter, in that it uses light to measure the amount of oxygenated and deoxygenated blood – both of which absorb light at different rates.

“This technique relies on the fact that near-infrared light, which we cannot see with our eyes, is able to travel deep into the body,” says Durduran.

“The second part is that different wavelengths, or colours, within this reddish light, interact differently with oxygenated and deoxygenated blood.

“By using two of these wavelengths, we can tell how much oxygen is in the blood.”

This is just one aspect of the information the device can record however, as Durduran explains.

“The third aspect is a more subtle thing, called the laser speckle. If you hold a laser pointer on a wall, or if you’re in a laser show, what you see is that the lasers are not like a regular LED lamp, instead they have dark and bright spots that oscillate called speckles.

“This oscillation can give information about blood flow. Our technology uses all of these concepts, with bigger physical models and light source detectors and analyses the light coming back out of the baby’s head to recover the information.”

One reason that this technology – which is also being studied for use in adults – is ideally suited for neonatal care, is that baby skulls are much less dense, meaning only a tiny amount of light needs to be to used.

By integrating these concepts with an imaging capability based on electroencephalography (EEG) and computerised tomography (CT), the result is 3D images with a high enough resolution to increase the specificity of information coming from areas of the brain.

The hope of TinyBrains is that by identifying brain function alterations during surgery and stays in the ICU, doctors will be able to uncover the reasons why brain damage frequently occurs in the neonatal period, and can be more precise with clinical interventions needed to improve neurological outcomes.

How long will it be before TinyBrains can market its device to hospitals?

The TinyBrains consortium kicked off its project in January and expects to run it until 2024, with a grant of €3.8m from the EU Horizon 2020 research and innovation scheme providing the three-year runway.

The project is being coordinated by The Institute of Photonic Sciences (ICFO) and includes a multidisciplinary team of physicists, engineers, experts in biophotonics and medical professionals from Spain, France and Ireland.

Despite it being early-on in the project, Durduran says the team can already use its prototype devices to measure up to two spots on a baby’s head.

The goal however is to create a soft cap-like device that can beam light into enough of the neonatal brain to create a real-time picture of it, along with the levels of oxygen and blood flow in specific areas.

“Our vision is to have this data displayed on a monitor like you have the heart rate and blood pressure in a hospital,” Durduran says.

In order to reach this vision, the TinyBrains roadmap involves finalising a functional device by the end of this year to carry into a testing phase in 2022 that will involve both neonatal piglets and babies with a CHD.

One advantage of the suite of technology in development is that because it’s all been proven safe in prior studies, the consortium can carry out animal and human studies simultaneously.

But despite this, Durduran still expects the process of commercialising the TinyBrains technology to run for at least another five years after the project ceases in 2024, meaning it won’t be widely available for another decade.