‘Mini-brains’ mimic the neural activity of an actual brain, allowing scientists to learn about how the organ develops, study disease and test new medicines 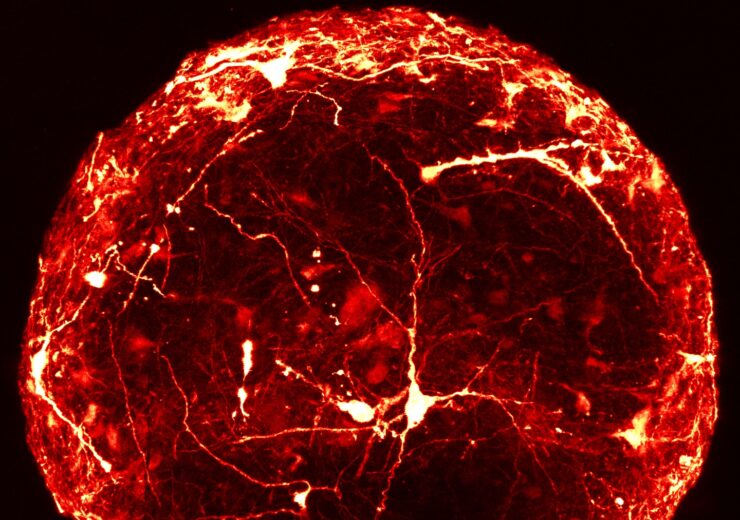 A seven month-old 3D ‘mini-brain’ imaged with a confocal microscope to reveal the structure of individual neurons throughout (Credit: HEPIA)

A closer look at the structure of artificial ‘mini-brains’ could improve future drug studies and reduce the need for animal testing, according to new research.

Researchers from the Wyss Center and HEPIA University in Switzerland recently published details of their successful efforts to produce high resolution 3D images of these complex models using microscopy.

The team of engineers and scientists combined a novel technique for labelling individual neurons with a method to make the whole sample completely transparent, and claims to have revealed the detailed anatomy of ‘mini-brains’ for the first time.

These findings were published online in the scientific journal Frontiers in Bioengineering and Biotechnology on 7 January.

Because it is reproducible and cost-effective, this imaging technique could potentially help to accelerate personalised medicine studies, and enable researchers to determine how a person’s brain may respond to certain drugs, reducing the need for animal testing in the process.

The new approach may also enable the imaging of large numbers of ‘mini-brains’, making it suitable for high-throughput screening for drug discovery or toxicity testing.

Professor Adrien Roux from the Tissue Engineering Laboratory, HEPIA, said: “Despite advances in growing ‘mini-brains’, it has been difficult to understand in detail what is going on inside – until now.”

Dr Subashika Govindan, the lead author on the paper who carried out the work at HEPIA, added: “Typically, to look inside a ‘mini-brain’, we slice it thinly and view it on a slide under a microscope. This is a slow process that can damage the sample.

“Now, for the first time, we have produced high resolution 3D images of single neurons within intact ‘mini-brains’, revealing their remarkable complexity.”

Because they can mimic the neural activity seen in an actual brain, they are used as a tool allowing scientists to learn about how the brain develops, study disease and test new medicines.

Personalised ‘mini-brains’ can be grown from stem cells generated using a sample of human hair or skin.

It is believed these small but complex structures could shed light on how brain disease progresses in an individual, and how this person may respond to different types of drugs.

‘Mini-brains’ have also previously been used to compare human brains to those of other primates.