M&A activity in the medical device industry significantly decreased in Q1 2013, with the total value of completed deals down 59.8% compared with Q2 2012. Adefemi Adenuga, industry dynamics analyst at GlobalData, reports. 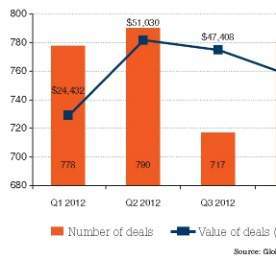 Although medical devices companies are in no way trying to play second fiddle to their pharmaceutical counterparts when it comes to deals, Q1 2013 was characterised by a relative conservativeness on behalf of the industry, a sign that companies are adopting a more efficient approach when managing scarce resources and shareholder funds.

This may signify a more cautious approach by companies towards bolt-on acquisitions. According to GlobalData, M&As do not come without their share of challenges, despite taking a relatively shorter time to yield results in most cases. After the completion of every merger or acquisition, a seamless integration of the operations of both parties is required in order to achieve synergy and its resultant benefits, which include scale and scope economies. An inability to achieve this often results in increased bureaucracy and costs.

The in vitro diagnostics and healthcare IT markets accounted for 28.8% and 18.6% of completed deals in Q1 2013 respectively, while cardiovascular devices, diagnostic imaging and orthopaedic devices made up 7.4%, 5.5% and 5.3% respectively. Significant deals completed in Q1 2013 include McKesson’s $2.1 billion acquisition of PSS World Medical, Cardinal Health’s purchase of AssuraMed for more than $2 billion, and Medtronic’s $3 billion debt offering. Other notable moves include Sony’s acquisition of an 11.5% ($643.7 million) stake in Olympus, and Stryker’s deal – worth close to $1.4 billion – on the acquisition of Trauson Holdings ($764 million) and a public notes offering ($600 million).

In Q1 of this year, North America continued to dominate deals in the medical devices industry, although the number completed declined by 9.5% from 549 to 497 for reasons discussed earlier. In Europe and Asia-Pacific, 132 and 79 deals respectively were completed in Q1 2013 – deals in these regions grew by 10.9% and 21.5% respectively in Q1 2013.

In Q1 2013 California-based Life Technologies featured prominently in the news regarding the possibility of a takeover, with Roche, General Electric and private equity firms such as Hellman & Friedman and KKR emerging as potential buyers. After months of speculation regarding the company’s future, a deal was finally agreed on 15 April, with Massachusetts-based Thermo Fisher fending off competition from life-science company Sigma-Aldrich and other competitors to seal a $13.6 billion deal for the in vitro diagnostics firm.

The deal enables Thermo Fisher to increase its share of the in vitro diagnostics market, which was worth more than $45 billion in 2011 and is expected to grow at a compound annual growth rate (CAGR) of about 6.3% to about $70 billion by 2018.

Thermo Fisher’s acquisition of Life Technologies establishes it as a major player in the burgeoning field of personalised medicine, bearing in mind that Life Technologies is regarded as the second-largest player in the field behind San Diego-based Illumina – another company that has been on the radar of many large companies, including Roche.

As pharmaceutical and medical device companies continue to strive to provide personalised care to patients, advanced genetic sequencing is expected to become increasingly important. Seen in this context, Thermo Fisher’s bid to strengthen its position in this market appears to make sound business sense. Furthermore, this deal potentially puts pressure on Illumina; Thermo Fisher will challenge it for the number one spot in the advanced genetic testing market, meaning that it may finally yield to the advances of companies such as Roche.

Thermo Fisher will benefit from Life Technologies’ substantial intellectual property rights (IPR). Currently, 69.8% of the latter’s $8.6 billion assets base is made up of goodwill and IPR. Indeed, Life Technologies prides itself on being one of the largest holders of IPR in the life-sciences space, with IPR totalling approximately $1.6 billion at the end of Q3 2012. The company’s Ion Proton System sequences DNA in about two hours at a fraction of the previous cost, resulting in its increasing adoption in the industry, while the business carries goodwill worth more than $4.4 billion. GlobalData believes the firm’s non-current assets, particularly IPR and goodwill, contributed significantly to the 12% premium charged for Life Technologies’ acquisition.

Meanwhile, the combined scale of both companies will result in significant cost savings and increased profitability. Thermo Fisher expects to reap about $275 million in adjusted operating income synergies from the acquisition in 2017. In addition, its annual revenues are set to experience significant growth; Life Technologies recorded $3.8 billion in revenues in the fiscal year 2012. Life Technologies’ wide range of products and extensive networks in emerging markets can be leveraged by Thermo Fisher to generate significant return on its shareholders’ investments.

As companies in the medical devices industry continue to jostle for better market positions and competitive advantage, GlobalData expects deals to become more focused on niche markets where companies can derive competitive advantage. Consequently, areas such as personalised medicine, which are rapidly growing, will witness more deals in the coming months. Furthermore, M&As will continue to account for relatively smaller portions of completed deals in the industry, as companies are poised to focus more on strategic alliances, which are considerably cheaper and less risky than acquisitions.

In cases where companies engage in M&As, they will be relatively small in terms of worth. However, large businesses will still pursue and subsequently purchase attractive targets, even at exorbitant costs. Thermo Fisher’s acquisition of Life Technologies is evidence of this.