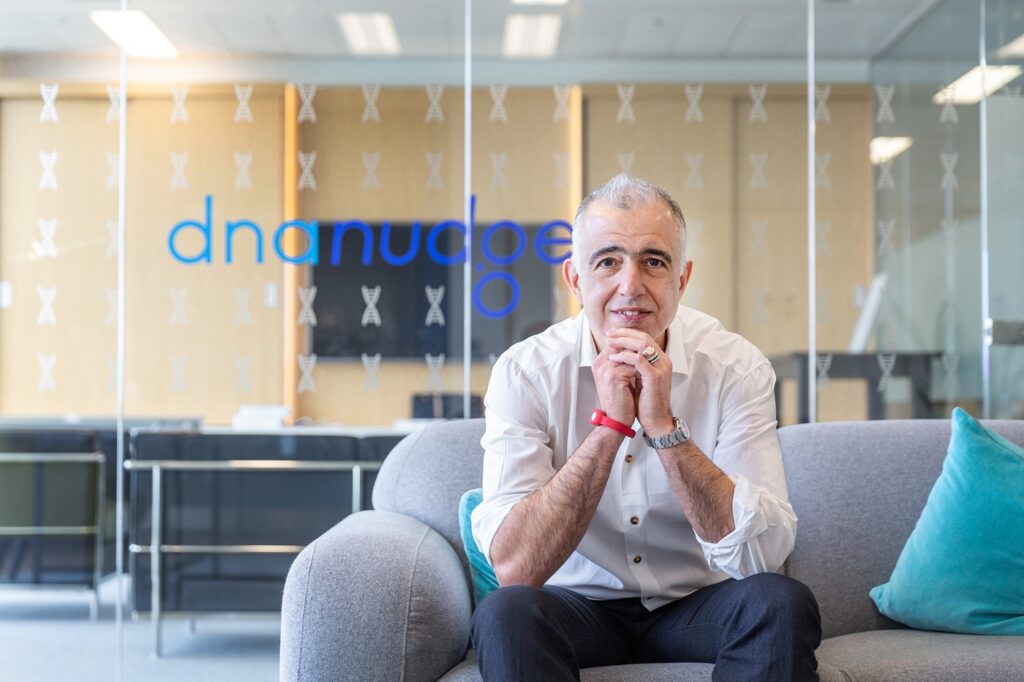 A lot of companies across the UK have repurposed their manufacturing processes to aid in the battle against Covid-19, mostly by producing PPE for the NHS and elsewhere. But one company found itself in the unique position of having a technology that was near enough fit for purpose already. DnaNudge founder and CEO Professor Chris Toumazou tells Peter Littlejohns how his business went from providing a genomics-based shopping service to becoming a key weapon in the fight between NHS hospitals and the coronavirus pandemic.

As the UK crosses the Rubicon into another lockdown, albeit a less draconian one, the necessity of an expanded testing infrastructure to make up the diagnostic half of the government’s Test and Trace strategy grows daily.

It’s for this reason the government has invested millions in innovations that can return a positive or negative result for the SARS-CoV-2 virus that causes Covid-19 in a matter of hours, not days.

A chunk of this funding went to DnaNudge after the flexibility of its technology – which primarily uses genetic markers to personalise healthy dieting and lifestyle choices – drew the attention of the Secretary of State for Health and Social Care as well as his scientific advisor.

“Because I’d been working on this for a public health issue anyway, to do with nudging behaviour and using lifestyle and genetics as the tool to do that – Matt Hancock and Patrick Vallance were aware of what I was doing.

“So when Covid-19 came along, it seemed from a utility point of view the most natural technology to be repurposed, because it ticked every box – out of the lab, untrained people to do the swabs and portable.”

Once that utility attracted the attention of the government, Toumazou entered into discussions about validating it for use in hospitals – but it wasn’t a decision without consequence.

“Our consumer business is suffering because we haven’t put resources into it.

“I didn’t want to spend my life making an IVD, and I could have said ‘no, I’ll just stick to my DnaNudge and get on with that’

“But hey, there’s a pandemic, we’ve got to save lives.”

How DnaNudge created and validated a Covid-19 test

Despite the commercial sacrifice made to repurpose DnaNudge into a Covid-19 test, the practical adjustments required to do so were no great challenge.

RT-PCR diagnostic testing, considered the gold standard for accuracy, involves adding specific reagents to a biological sample and heating and cooling the mixture intermittently to cause the desired reaction.

What made the task of creating a Covid-19 test much easier for DnaNudge was that its analysis tool – the toaster-sized NudgeBox – had this capability built in already.

“We had a solution before the coronavirus came along,” says Toumazou.

“The box was designed for PCR thermocycling. It could be a lot smaller if it was an isothermal because we wouldn’t need a Peltier or a thermostat to heat up and down.”

Another USP behind DnaNudge its founder says attracted the government’s attention was the number of microwells present within its microfluidic lab-on-chip cartridge.

These 72 wells mean the company can include the human control gene to ensure there’s biological material present, as well as test for several viruses at once.

This is one advantage the government is relying on to separate Covid-19 diagnoses made by DnaNudge with those of more common winter viruses like influenza types A and B, as well as respiratory syncytial virus (RSV).

DnaNudge began the process of validating its technology in March under the instruction of the Department of Health, a process that involved testing its efficacy against comparator assays.

The biological samples used in the process came from ventilated patients that were confirmed positive for Covid-19 in St Mary’s Hospital and Charing Cross Hospital.

“That was against very sophisticated double-nested PCR machines, and we got about 98% sensitivity and 100% sensitivity,” says Toumazou.

Officially, the CovidNudge testing system – which claims an upper limit of 90 minutes in turn around time – has a reported 94% sensitivity rating.

But the DnaNudge founder adds that the reason for this is that some of the comparator technologies it had to validate against were not all that accurate.

“That’s what brought our sensitivity down, there were a few machines that weren’t great, like the Abbott technology,” Toumazou says.

“Some, like Thermo Fisher, Roche and AusDiagnostics were up in the high 90s – with Abbott for example we were at the low 90s, so the average was somewhere in the middle.”

The fast-track validation process was a first for the UK Medicines and Healthcare products Regulatory Agency (MHRA), but with hospitals dealing with ever-increasing patient loads as the death rate was building to its April peak, the need to sidestep some of the ethics procedures was real enough to get them on board.

“We were thrown into a sort of warzone with this box, breaking all the rules of hospitals because they were saying ‘look, if we wait for ethics it’s going to take six months. We’ve got to validate this now and get it on patients’.

“We spent a month doing that flat out.”

The results of this validation earned DnaNudge’s Covid-19 test a derogation from the MHRA – a temporary permission agreement to use a non-CE-marked medical device in a clinical setting – before the company obtained a CE mark a few months down the line.

Regulatory hoops can be tough to jump through for medical device manufacturers, but with that piece of the puzzle in place, Toumazou says the major hurdle to overcome was the fact that in many of the London hospitals where CovidNudge was trialled, the IT infrastructure was nearing obsolescence in contrast to the needs of his technology – which connects to the cloud to process results.

Public Health England (PHE) insists that every Covid-19 positive gets reported to them through the IT system, and therefore there needs to be an extra layer of middleware connecting up several parts of the IT infrastructure in hospitals to PHE – and DnaNudge had to fit in with that somehow.

“This is modern cellular technology just like in a mobile phone, and it connects to all of the data in the cloud.

“And then we go into the Florence nightingale hospitals that have got such old-fashioned IT that we had to ask how you put something as sophisticated as this into such a system.”

The solution, he adds, was a lengthy process involving “a whole force” of IT professionals trying to modernise the way patient information gets deployed – a process Toumazou, perhaps kindly, describes as “a headache”.

The government made a £161m ($211m) order for 5,000 NudgeBox units and the chips to run 5.8 million Covid-19 tests back in August – which DnaNudge is selling at cost price to the NHS – alongside 450,000 rapid LamPORE tests from Oxford Nanopore Technologies.

This signalled that the company’s technology will be a key part of how they plan to keep the virus under wraps in hospitals.

But although several London hospitals bought into the idea of decentralised testing that cut out the pathology labs for the sake of speed, Toumazou says it’s been a harder road to hoe convincing their counterparts up North.

“There were generally two camps of hospitals during this process, the ones that wanted to ensure the IT was ready, and others, like Chelsea and Westminster Hospital, who said ‘No, we’re in a warzone, let’s deploy it and manually input the data until we get the IT set up.’

“We were working with them and they were part of the user studies and use cases, but we’re going up north now and there’s still this tradition that pathology labs need to take control of these things – in a way that’s quite frustrating for us.

“What’s the point in having something like this in a central lab? It needs to be near patients to get the result fast, particularly when you’re trying to segregate patients based on positive and negatives quickly.”

But despite this barrier, the speed at which DnaNudge was able to disrupt the traditional, centralised model of diagnostics is what has Toumazou excited.

“The use cases that came out of this were really my passion,” he says.

“That whole decentralisation and the fact that this wasn’t run by the pathology labs, but put in the A&E department, in the maternity wards, in the elective surgery areas.

“It was fantastic because it meant the staff, the nurses, the midwives could run the boxes – and that’s what’s happening now.

“They’re in these decentralised areas where you don’t have to wait that transport time for these things to go to central labs anymore.”

Describing the process as “bulldozing” due to the move-fast-and-fix-things approach required to get it into hospitals for daily use, he says the pandemic allowed him to bring the passion that originally drove him to create the business – making healthcare a more personal and less centralised affair – to life.

“I created DnaNudge because of my frustration with trying to get personalisation into the hospitals.

“I really wanted to bulldoze the NHS by saying ‘let the consumer look after their own health’.

“It’s been working quite well, until Covid-19 came along – but now we have bulldozed the hospitals, but we’ve gone the other way around.”

Now that DnaNudge has its foot in the door, and while the consumer wing of Toumazou’s business is being left to suffer, part of its strategy going forward will be based on selling itself on the success of decentralised testing.

As well as the reputational gain of helping the UK to battle Covid-19, he says strategically, by setting up the decentralisation model in hospitals, the door is open to use DnaNudge to test for anything from tropical diseases and STDs to the BRCA gene associated with breast cancer.

“For sustainability in the hospital sector, that’s another business model that we will try and capitalise on,” he says.

When it comes to Covid-19, Toumazou is keen on getting across that CovidNudge isn’t going to solve the need for rapid testing of huge sections of the population.

“It’s not mass testing,” he says. “We’re not the moonshot. That’s probably going to be new diagnostic technologies like lateral flow testing.

“I’ve always tried to break this conflict between speed and accuracy, and have high speed and high accuracy, but unfortunately with these new technologies that trade off will be there.

“The benefit of CovidNudge will be for hospitals and the peripherals around them, as well as care homes and schools, where I think we can’t afford to have too much inaccuracy, but need a certain amount of speed.”