Microfluidics is still developing as a field of science, but it's already showing promise in several applications related to the medical devices sector 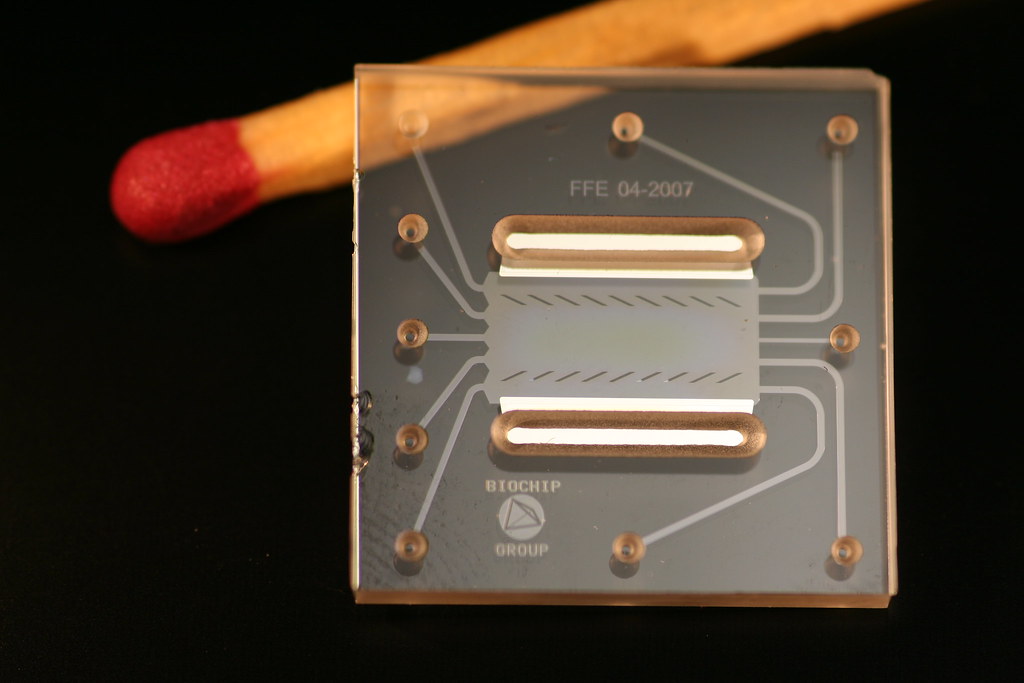 A lab-on-chip microfluidics device compared in scale to a matchstick (Credit: Flikr/Stefan_-)

Advances in the field of microfluidics are considered one of the main breakthroughs of this decade in the medical devices sector, leading to several applications that hold promise for better understanding the human body.

One of the major constraints in the field of medicine and medical research is the number of staff it takes to complete certain procedures, like diagnostic testing or protein engineering – but microfluidics continues to make scalability for ex vitro processes a reality.

The field of study – defined as the movement of liquids and mixtures at a nano, pico, or even smaller scale – began in the field of consumer electronics, powering essential items like the humble office inkjet printer.

Today though, the term is frequently seen in a medical context, especially in regards to devices developed to improve diagnostic testing for the SARS-CoV-2 virus, which manifests itself as Covid-19.

Outside of these recent applications, the benefits of devices enabled by microfluidics range from more efficient means of editing genes to mapping the molecular state of every single cell type in a healthy human.

Applications of microfluidics in the medical devices sector

Starting with the most commonly-discussed application at the moment – microfluidics is behind many of the newest methods of testing for SARS-CoV-2.

Commonly known as lab-on-chip technology, a plethora of companies have condensed the interaction between reagents and human biological material in a typical PCR-based test onto a microchip, which is programmed to add each to a reaction micro chamber and indicate the existence of virus cells.

These lab-on-chip diagnostic tests have been used to detect other conditions, but it’s believed that the lack of testing capacity in several developed countries provided a new impetus for the creation of commercially viable testing kits some expect will lead to improvements in other microfluidics-based assays.

Clustered regularly interspaced short palindromic repeats – known more commonly as CRISPR – is a biotechnological tool that entered the fray of science as a technique for editing genes.

Despite some confusion about CRISPR’s progeny as a human gene-editing tool, biologists Dr Jennifer Doudna and Dr Emmanuelle Charpentier received the Nobel Prize in Chemistry for its discovery on 7 October 2020.

As well as editing the genome, the discovery was found to have an application in diagnostics too, and in both cases, microfluidics has been used as a means of shortcutting the processes, increasing the output of results and improving the scalability of procedures.

One of the most recent instances of microfluidics in its application to CRISPR is in Covid-19 testing – but the same approach is currently being applied to editing the genome.

Microfluidic vortex shedding might sound like something from a sci-fi movie, but it’s the name of Indee Labs’ proprietary technique for programming T-cells – otherwise known as white blood cells – to target and root out disease in the body.

Gene editing of this kind has been researched for years in the field of immunotherapy, with progress made towards programming T-cells to attack cancer cells, among those of other diseases.

But scalability has remained a problem, and that’s where Indee Labs believes its application of microfluidics – in which the CRISPR Cas-9 protein can be simultaneously delivered to tens of millions of T-cells at a micrometre scale – can decrease the cost of immunotherapy and make it available to more patients.

Another development Indee Labs brings to the table is the ability to deliver the Cas-9 protein to T-cells without using a lentiviral vector – a common delivery vehicle derived from the human immunodeficiency virus (HIV) and used for its ability to invade T-cells.

Instead, the firm’s microfluidics device pushes cells through tiny post arrays to separate big cells from small cells, a process it discovered makes the cell membrane transiently permeable, meaning Cas-9 can be delivered without the use of a viral vector.

The 13-year-long Human Genome Project (HGP) is heralded as one of the greatest scientific achievements of the past century for mapping the DNA sequence of which every human shares a 99.9% concordance rate.

But that remaining 0.1% can account for more than three million differences between one person’s genome and another’s – those differences are called mutations or single nucleotide polymorphisms (SNPs).

Both SNPs and mutations are mistakes made during the replication of DNA – a constantly occurring process – but mutations happen in less than 1% of humans, while SNPs occur in more than 1%.

Both, however, can either cause or raise the probability of a person developing a range of diseases, which is a key reason why researchers are using microfluidics to isolate specific cells in a process known as total single cell analysis.

The hope shared by researchers conducting such experiments is that isolating specific abnormalities in genetic code could shed more light on the ultimate causes of certain diseases, as well as how experimental treatments impact them.

In what could be seen as the next stage of granularity in the understanding of genomics since the HGP reached its conclusion, an international collaborative effort to create a map of the molecular state of cells in healthy human tissues is underway.

This, it’s believed, will provide a framework for understanding the differences seen in cells and how they relate to the occurrence and development of human disease.

Named the Human Cell Atlas Project, the scientists involved are using microfluidics to process tens and hundreds of thousands of single cells simultaneously to measure their transcriptional profiles at rapidly decreasing costs – bringing the ambitious goal closer to reality every day.