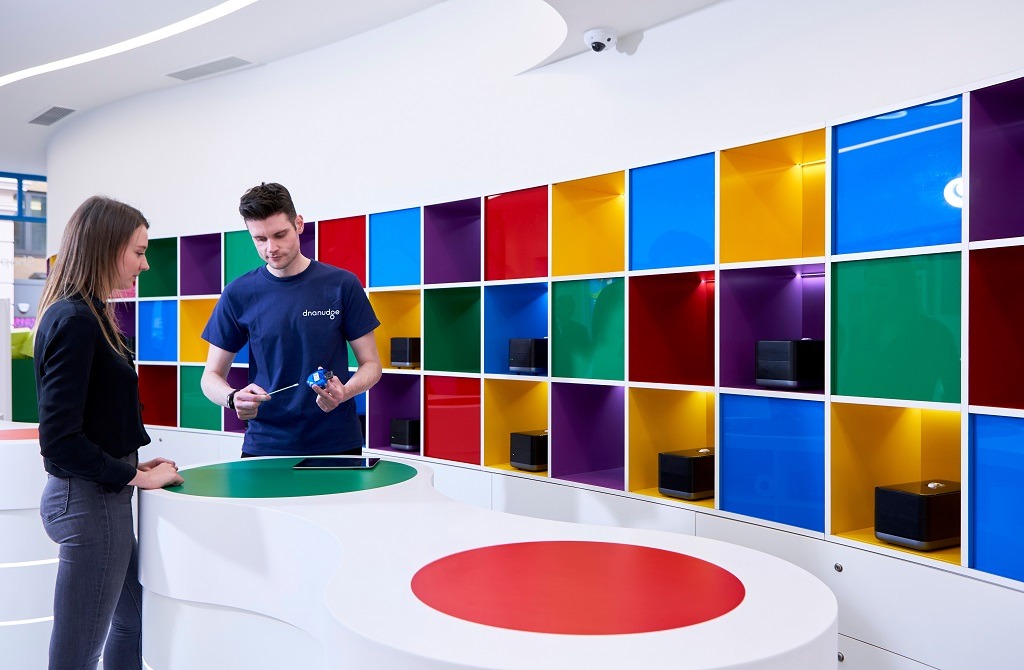 The success of FitBit and AppleWatch devices are just two examples that prove there’s power in personalising health, but what if it was your own DNA giving you advice? Peter Littlejohns speaks to DnaNudge founder Chris Toumazou about how his company uses biology to encourage people to live healthier lives.

Human DNA can tell us many things about an individual, and given the sheer breadth of nucleotides that make up the genome of every person, our understanding of how they link with diseases in the body is only scratching the surface.

Every human shares 99.9% of the same DNA, but that remaining 0.1% can account for more than three million differences, expressed as either Single Nucleotide Polymorphisms (SNPs) or as mutations – the difference being that mutations occur in less than 1% of the population, while SNPs occur above 1%.

Scientists have studied certain SNPs in enough detail to determine a person’s propensity to develop certain health conditions, many of which can be mitigated through lifestyle factors that have also been well established in medical literature.

This is the background of knowledge that Chris Toumazou – chief scientist of the Institute of Biomedical Engineering and Regius Professor of Engineering at Imperial College London – uses to power his business DnaNudge.

“The genes we look at are for things like hypertension, cholesterol and type two diabetes.

“We don’t look at genes related to metabolism or anything to do with diet, all we say is ‘if you’ve got the genes for type two diabetes, for instance, then saturated fat and sugar are your issues’ – that’s what a clinician or endocrinologist would tell you.

“These are very carefully-selected genetic markers from population studies with hundreds of thousands of people.”

The information Toumazou describes has been around for a long time, and DNA-based propositions like 23andme or EasyDNA already provide information related to genetic predispositions to diseases.

But it’s the application of technology to keep people accountable for their lifestyle choices he believes gives DnaNudge its unique selling point.

“That nudging bit is really the strong bit of what we are doing,” he adds.

At the concept level, DnaNudge uses a person’s genetic material as an anchor point for helping them understand how to live healthily.

Regardless of whether a person has the FTO gene associated with an increased propensity to hypertension, for instance, there’s every chance they can develop the condition through other lifestyle factors.

“We know that genes on their own could only be a small part of the reason somebody develops a condition, because inactivity, lifestyle and nutrition all play a role,” says Toumazou.

He uses the example of two boxes of cereal to show that the “nudging” toward one box’s nutritional profile over the other is designed to encourage subtle changes in behaviour that can, over time, allow people to avoid the macronutrients that increase their already heightened risk of whichever conditions their DNA analysis revealed.

“If one box has five grams less saturated fat than another, then over a year, one or two kilograms of saturated fat haven’t got into my bloodstream, without me even realising it.

“We’ve taken the problem of genetics, which other companies will give you, and translated it into a solution in a way that gets people to change their behaviour over time in small ways that add up.”

The physical assets that power DnaNudge day-to-day are a smartphone and a wristband with detachable capsules inside, which contain the digital manifestation of a person’s DNA.

This is a feature Toumazou believes only adds more weight to the nudges, because, as he says, “what is more authoritative than your biology making decisions for you?”

But it also contains an infrared barcode scanner to check food as well as skincare products on the fly, with the capsule’s LED glowing green or red to indicate whether it fits the DNA requirements needed to reduce the chance of developing whichever diseases a customer is predisposed to.

Where is gets a bit more complicated is how the DNA itself is extracted and digitised.

Lab-on-chip technology linked with the cloud

DnaNudge uses a cartridge containing DNA, which is placed into an analyser – the toaster-sized NudgeBox – and after roughly an hour it’s digitised, encrypted to maintain privacy and then uploaded to the cloud, where it’s linked to a customer’s profile, which is accessible on a smartphone app.

Alongside nudging them to get active if they’ve sat for too long, when users scan food products as well as skincare products, the app explains exactly why the choice is good or bad for them based on their DNA.

A profile page also contains a breakdown of how each macronutrient could increase their propensity to the list of diseases for which DnaNudge highlights, using a red, amber and green colour pallet to emphasise the differences.

Although this approach is unique, the science that enables it – lab-on-chip PCR – is nothing revolutionary.

All of these steps, which in a traditional lab would be done by hand, take place at the micro level in a process developed over years of study in the field of microfluidics.

This functionality and the ease-of-use inherent within DnaNudge recently attracted the UK government to purchase a slightly repurposed kit to test for Covid-19 – a product Toumazou’s company is selling at cost price to the NHS.