Four medical breakthroughs 3D bioprinting is having in the healthcare industry

Here we look at some of the ongoing research and results of recent advances of bioprinting technology in the medical industry, enabling the production of organs and body parts 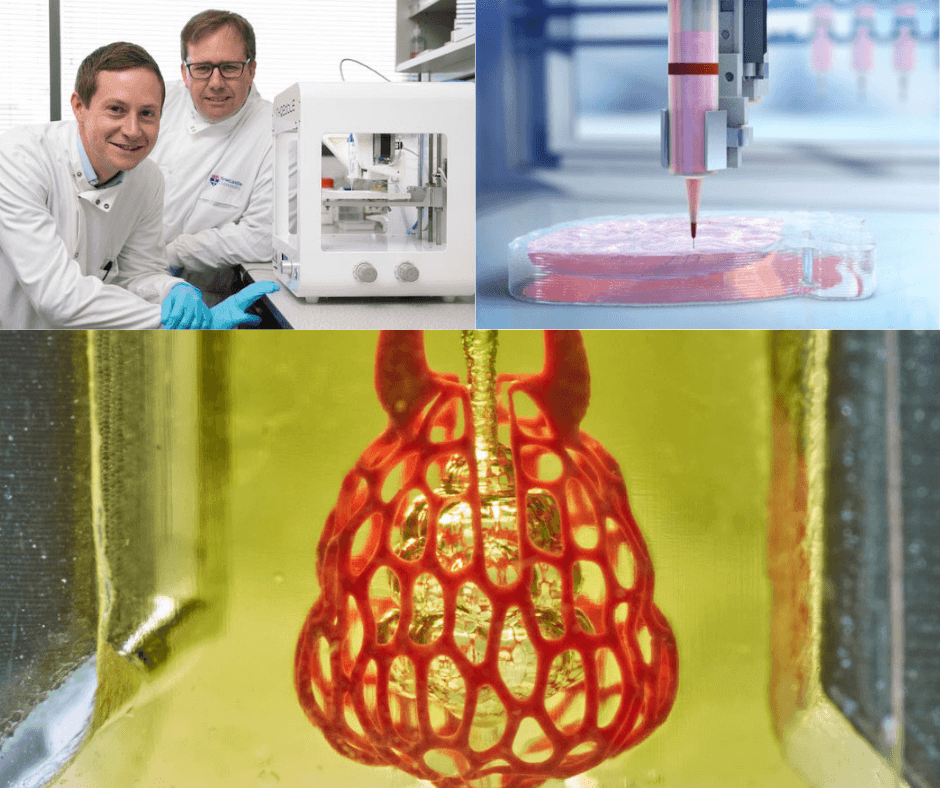 Medical breakthroughs 3D bioprinting is having in the healthcare industry, saving years of waiting for donors

The world of 3D printing has no doubt opened doors in many industries but the life-saving impact it’s having in the medical devices industry, from prosthetics and surgical instruments to discovering ways of bioprinting hearts and lungs, is a world apart.

The technology is reaching new levels as bioengineers are using it to replicate human tissue and even whole organs out of cultured cells, a process that could considerably eases pressure on the demand for transplant organs.

Bioprinting refers to 3D printers that builds up layers of biomaterial to develop complex bodily structures, like skin, bones and even corneas.

This is due to its revolutionary breakthrough in the healthcare and pharmaceutical industries.

Here we take a closer look at the current applications of bioprinting within the medical sector, and how the technology and its research is expected to evolve.

Dubbed the first 3D printer that can manufacture human tissue under the condition of microgravity, the BFF bio-printer was developed by Florida-based additive system manufacturer nScrypt, in partnership with spaceflight equipment developer Techshot.

Launching on the International Space Station (ISS) this month after years of research, it was discovered that 3D bio-printed soft tissue collapses under its own weight – unless it’s produced in a microgravity environment.

Under these circumstances, the tissue is able to maintain its shape, as the cells culture and become self-supporting over time and remaining solid even back on earth.

Adult human cells and chains of amino acids will be used as source material for viable tissue as a first small step to eventually creating human organs, such as hearts or lungs, in space.

The early stages for BFF could go on for almost two years during which it will create test prints of cardiac-like tissue of increasing thickness.

Biolife4D to print a mini heart

Heart disease is the number one killer of men and women in the US each year, yet countless individuals who need transplants are left waiting as there aren’t enough donors to meet the demand.

One biotech company is aiming to print a working human heart, which is suitable for transplant, by using advances in tissue engineering and technology.

The company has proven the ability to 3D bioprint human cardiac tissue, or more specifically a cardiac patch.

A cardiac patch is comprised of multiple cell types found within the human heart, and can be used to restore lost myocardial contractility – the innate ability of the heart muscle to contract – for patients with acute heart failure.

This step is crucial, as the company seeks to disrupt how heart disease and other cardiac impairments are treated, particularly by improving the transplant process by eliminating the need for donor organs.

BioLife4D is currently working on 3D bioprinting valves, blood vessels and a mini-heart, before reaching its aim of printing full-sized human hearts that could be used in transplants.

Cellink – the first to bioprint cornea

Swedish firm Cellink is a 3D bio-printing company, and was one of the first in the world to offer 3D printable bio-ink – the substance used to print human organs and tissues.

A research team from Newcastle University in the UK used Cellink’s Inkredible 3D printer to print the first human corneas, and published their research in a paper, titled 3D Bioprinting of a Corneal Stroma Equivalent.

After taking the dimensions for the 3D-printed tissue from a real human cornea, the researchers scanned the patient’s eye to quickly 3D print a cornea that matched the shape and size of the patient’s actual cornea.

Cellink is the developer and provider of 3D bioprinters, the BIO X and its predecessor the INKREDIBLE.

In addition, the company markets a broad range of 3D printable bio-inks, suitable for use on its own systems and third party bioprinters.

The partnership is aiming to accelerate the development of a 3D neural stem cell system to provide insight on how gravity alterations influence cellular properties.

Surpassing one of the biggest challenges so far are researchers from Rice University, who discovered a way to print vessels that are essential for the organs to function.

Lungs are one of the most complex structures, with intricate pathways of air ducts and blood vessels interacting with each other to make a functioning lung.

They developed an open-source technique for bioprinting tissues “with exquisitely entangled vascular networks, similar to the body’s natural passageways for blood, air, lymph and other vital fluids.”

The technique is called the Stereo Lithography Apparatus for Tissue Engineering, or SLATE, and uses additive manufacturing to make soft hydrogels one layer at a time, which then become solid when exposed to blue light.

The researchers demonstrated their technique by printing a structure that mimicked the function of air sacs in the lung, which were sturdy enough to avoid bursting during blood flow.

It allowed a rhythmic intake and outflow of air that simulated the pressures and frequencies of human breathing.

They also showed red blood cells flowing through a network of blood vessels surrounding the air sac could take up oxygen in a similar way to those in the lung’s alveolar air sacs.

Jordan Miller, assistant professor of bioengineering at Rice’s Brown School of Engineering, said: “One of the biggest roadblocks to generating functional tissue replacements has been our inability to print the complex vasculature that can supply nutrients to densely populated tissues.

“These interpenetrating networks are physically and biochemically entangled, and the architecture itself is intimately related to tissue function.”

Miller said his lab is already using the new design and bio-printing techniques to explore even more complex structures.

EndoFresh gets FDA nod for its disposable Digestive Endoscopy system