Close to the bone: bioactive materials

The mineral in our bones and teeth can store a large electrical charge when it is electrochemically synthesised as a very thin film, University of Rochester scientists have discovered. Medical Device Developments speaks to lead researcher Matthew Yates, a professor at the department of chemical engineering, who reveals the potential applications of the bioactive material in improving orthopaedic devices. 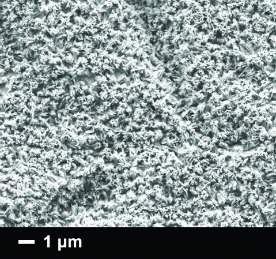 From microwave energy to penicillin, some of the biggest scientific breakthroughs happened purely by chance. Now a bone-stimulating material with other exciting properties looks to be the latest happy accident.

Matthew Yates and his team at the University of Rochester were trying to improve fuel cell membranes when they discovered some unusual properties in the material being created, features that could be advantageous in orthopaedic implants.

Dental and orthopaedic equipment manufacturers tend to make use of calcium phosphate-based materials for such devices. Of these, hydroxyapatite (HA), a natural component of our bones and teeth, is the likely choice, because it’s the most chemically stable under physiological conditions.

An excellent bioactive material, HA can promote the growth of implant-surrounding bone, essentially speeding up post-surgery healing. It doesn’t have great mechanical properties, though, and as a consequence is often used as a coating for titanium medical products, where the substrate’s strength is combined with the ceramic’s bioactivity, for an implant that benefits from the advantages of both.

However, even then, many limitations still arise. For instance, getting a uniform HA coating over the geometrically complex shapes that orthopaedic implants and their components often require can be tricky. The covering is also susceptible to thermal decomposition over time, and isn’t always sufficiently adhesive. All these problems can leadto implant failure.

During seven years of research into developing fuel membranes, Yates and his team discovered how to make extremely thin films of HA using electrochemical synthesis. By placing two electrodes in a special salt solution and applying an electrical current, a fine layer of the bioactive substance would grow on the surface of the plates. After conducting tests, the researchers realised the film retained a stored electrical charge, with one side positively polarised and the other negative. The stored charge was far larger than any previously reported for HA. This was intriguing.

"Hydroxyapatite isn’t really commonly studied in fuel cell membranes, so our initial research was a little bit out there," admits Yates. "But over the course of doing this, we discovered that in one of the steps during our synthesis, it resulted in a strong intrinsic polarisation. We realised this was potentially useful in doing some good things in implant technology, a field in which the material is more commonly used."

After immersing the film in simulated body fluid, the researchers noticed calcium phosphate was strongly attracted to the negatively charged outer surface of the substance and formed small crystals. This could speed bone healing if the film is applied to titanium surgical screws used in rebuilding fractured bones; the unique properties of the film might also alleviate some of the disadvantages (poor adhesion, non-uniformity) conventional HA coatings have in implant technology.

Yates reveals he was unsure how disruptive his material could be at first, but after talking to some orthopaedic experts, including a professor in Rochester’s dental school, he began to see the commercial potential of his research. Implants or screws (which previously fared poorly when coated) could be dipped in the novel, electrically polarised HA, benefitting society by reducing post-surgical recovery times for implant patients with poor bone function due to conditions like osteoporosis.

Yates and his colleagues’ work isn’t the only study to show negatively charged hydroxyapatite promoting osteointegration: a handful of others have found the same thing.

"However, in those previous studies the way the material was polarised was at a high temperature, by heating and applying a strong electric field," Yates points out, "because at high temperatures, you can get ions starting to move around. They are effectively frozen in place close to body temperature, but our biomaterial is polarised during electrochemical synthesis and moderate temperatures. It’s near to the boiling-point of salt solutions, around 95°C, or so."

"We’re trying to make something that alleviates a lot of the previous weaknesses of the material by giving it some really unique properties that will hopefully result in big benefits for orthopaedic patients."

Another advantage is the way Yates’s team conducts the application of the HA film onto implants. A method known as plasma spray, which involves a combination of high-energy heat source, a relatively inert spraying medium and high particle velocities, is usually employed for orthopaedic devices.

"It’s almost like taking a spray can," reveals Yates. "It’s difficult to get a uniform finish and, while the coatings it creates are pretty durable, they tend to be thick."

Initially, this method showed positive effects within the orthopaedic sector, but poor adhesion meant such coatings tended to delaminate over time. Implants would often heal quickly, but eventually become loose and have to be replaced. As a result, much of the industry has moved away from HA coatings altogether, but Yates’s results could reverse this trend.

His film is so thin (sub-micron thickness, compared to the usual 50µm of plasma spray), his collaborator wants him to stop calling it a ‘coating’, because of the negative connotations surrounding that term.

His team has demonstrated that an orthopaedic screw can be coated easily in just 75 seconds, and even geometrically complex present no difficulties, while the extremely fine covering is strongly adherent and unlikely to peel off over time.

Diamond in the rough

An extra benefit of the electrochemically synthesised material’s thinness is that it allows medical devices to retain any surface modifications, such as those achieved via acid-etching or sandblasting. These processes ensure that implants have rough surfaces, which is vital for optimal bone growth.

"Somehow, even at the nanoscale, roughness can have a very big effect," says Yates. "If you look at a perfectly smooth surface, the process of bone growing around the implant is retarded. The bond the implant makes with the surrounding bone is stronger with rough surfaces."

Plasma-spraying roughened implants often creates surfaces that are too smooth.

"On the one hand, you add some benefit by increasing bioactivity, but on the other, you cause a detriment by decreasing roughness," Yates explains. "We can take commercial implants that have already been roughened, so it won’t make a difference, because the coatingis so thin."

HA’s high electrical polarisation also means it has a high surface energy, so when it’s exposed to moisture, the water spreads across the whole platform evenly, meaning body fluids will be attracted to the surface of the implant and promote healing.

"Having a hydrophilic surface is attractive for implants," says Yates. "If you drill into bone, you want body fluid to wet all of the screw surfaces. It’s a property that manufacturers particularly want to market."

Yates approached the National Science Foundation and enrolled in its Innovation Corps – a set of activities and programmes that prepares scientists and engineers to extend their focus beyond the laboratory and broaden the impact of basic research products. After gaining support from several experts in the field, the team realised it could be on to something exciting, but more data will be required before the researchers take the next step towards commercial realisation.

"We couldn’t just base it on bench-top experiments in beakers," Yates stresses. "My collaborator worked with rabbits as a previous animal model, and thought the data would be a good starting point for having an idea of performance in dental-type applications, and other orthopaedics."

An in-vivo pilot study has been designed to test the feasibility of the material. By comparing two sets of rabbits (one control group, and another with induced osteoporosis), the researchers are investigating whether the performance of the material applied to titanium implants will prove beneficial for the afflicted animals.

Yates stresses that the team is just getting off the ground and working with the university to come up with an arrangement that will allow it to pursue the project commercially, but he is quietly confident.

"I’m working on the assumption that the data being collected will be great. Maybe that is overly optimistic, but the people I’ve spoken to are pretty convinced, based on our in-vitro data and their prior experience. Once we’ve got some animal data, we’ll be able to make a much stronger case," he says.

"Hydroxyapatite has been around for a long time, and we’re not comparing ourselves to other things. We’re trying to make something that alleviates a lot of the previous weaknesses of the material by giving it some really unique properties that will hopefully result in big benefits for orthopaedic patients."

For now, the industry will have to watch this space, but if the results are promising, it could be a major step forward for orthopaedics and another triumph of chance discovery.