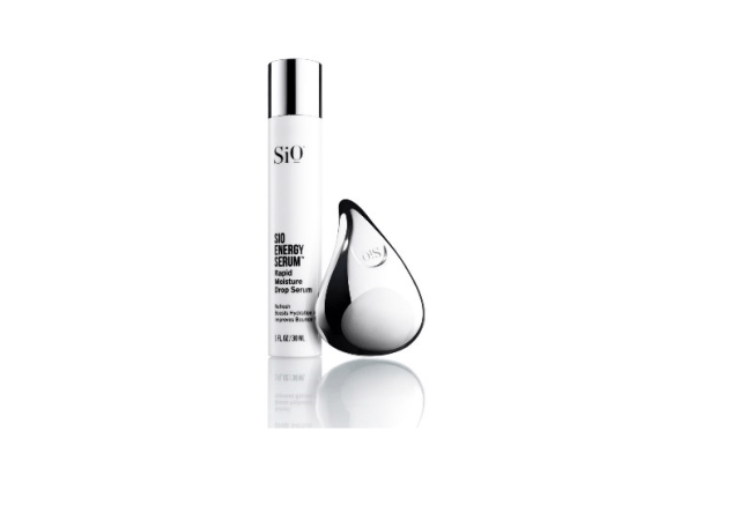 SiO, a leading manufacturer of medical-grade silicone patches for cosmetic use, announced the brand’s extension into skincare tools with the launch of its SiO Cryodrop™ Cold-Controlled Magnetic Facelift which combines the benefits of cryotherapy or “cold therapy” with magnetic technology to visibly lift, tighten and sculpt facial contours.

This is the first facial tool of its kind to merge a trio of modalities into one at-home tool. The SiO Cryodrop is designed to be used in tandem with the SiO Energy Serum™, a Rapid Moisture Drop Serum also launching today, to create the SiO Cryo System™, an efficient, multi-purpose skincare treatment.

Cryo Technology – The SiO Cryodrop’s cooling touch works in conjunction with cooling actives in the SiO Energy Serum to refresh and visibly rejuvenate the skin. This powerful combination reduces the appearance of redness, fine lines and wrinkles, as well as minimizes pore size.

Magnetic Action – The magnet housed within the SiO Cryodrop boasts a lifetime charge and works to push the positive ions from the SiO Energy Serum into the negative ions of the skin for enhanced absorption and longer-lasting results.

Facial Massage – This ergonomically molded tool has been deliberately shaped for optimal facial massage on all areas of the face. Its tear-tapered end and rounded body help to relax facial muscles and release tension. The tool’s cold application combined with the massaging action work to sculpt facial contours and diminish puffiness.

The SiO Energy Serum is an innovative topical that features a cooling technology to help defend skin’s moisture barrier, reduce water loss and significantly improve skin radiance, bounce and suppleness. Upon application, serum polymers break apart releasing water droplets that cause a cooling sensation. Ingredients include powerhouse antioxidant Camellia Japonica flower, a wonder of nature whose self-preserving flower does not wilt for five days after it falls from the plant. Other key ingredients include green tea, hydrolyzed collagen and skin-plumping peptides to lock in moisture for improved elasticity and tone. Together the SiO Cryodrop and SiO Energy Serum – the SiO Cryo System – immediately help sculpt and tighten facial contours, while restoring a healthy vibrancy to skin.

“We’ve been working on this for a while and it’s an exciting step in our growth to be able to introduce this innovation from the SiO family,” says founder, Gigi Howard. “There’s nothing like this tool on the market. We’ve taken magnetic technology and combined it with benefits from professional spa treatments and advanced topical skincare. You get major results from one brief daily ritual.”