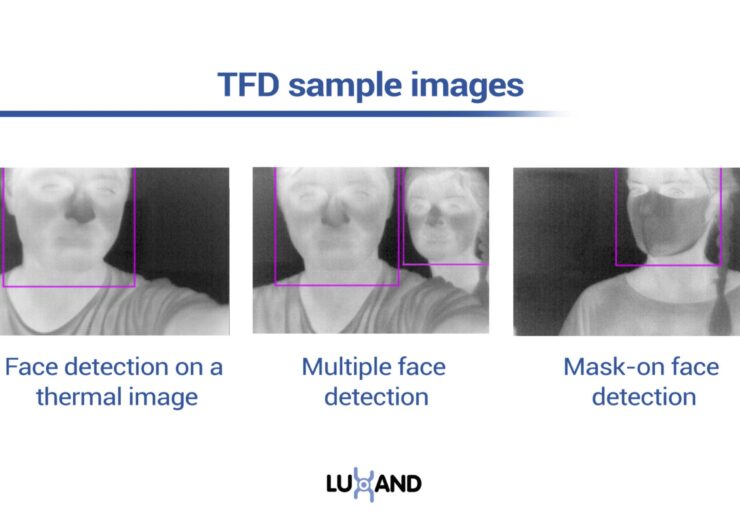 Luxand has released a new FaceSDK 7.2 version with numerous improvements, including a major Thermal Face Detection feature, that helps small-, medium- and enterprise-level companies fight the spread of COVID-19.

Thermal face detection is a major feature that makes it possible to detect faces on streams and images from thermal cameras for anti-spoofing or fever-screening needs. Combined with a thermal camera, this new feature detects high temperatures in humans, meaning potential coronavirus cases.

The fever-screening process can be technically described as follows: the thermal camera is connected to a computer, tablet or phone; images taken by the thermal camera are passed to the Luxand FaceSDK, which detects the coordinates of faces in images; after that, the maximum temperature is measured inside the detected rectangles, and temperature readings of each person are collected. A temperature of over 100.4°F (38°C) indicates a fever – a key symptom of COVID-19.

Face detection models can now be loaded from files in the new FaceSDK version 7.2, which is an important improvement for sophisticated and niche companies and industries, allowing them to request custom face detection mechanics and adjustments based on their business needs.

Besides the thermal face detection feature, FaceSDK version 7.2 has the following face detection and recognition improvements: full support of Python has been added, the face enrollment speed has increased by two times on Linux and autorotation of loaded JPEG photos using EXIF has been added. In addition, FaceSDK 7.2 now allows for the detection of even smaller faces on larger images and high-resolution video streams.