Cleveland Clinic has projects underway to prevent burnout among its staff by integrating AI in healthcare, which will aslo enhance empathy towards patients 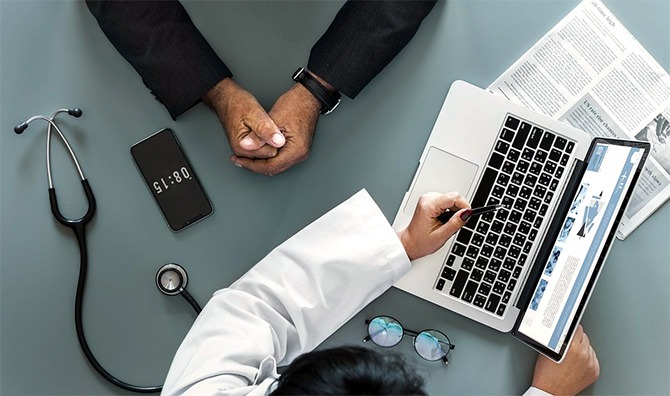 AI’s integration into healthcare is transforming the field at a rapid pace, with it particularly enhancing communication between doctors and patients, allowing for greater empathy in the interaction between both.

Although it is proven to increase productivity, the technology is also greatly expanding the amount of data being collected that can be “burdensome” if not handled correctly, according to Dr Brian Donley, CEO at Cleveland Clinic.

He spoke at London Tech Week about how healthcare providers at the US hospital use AI in their practices to not only improve patient outcomes, but also increase the amount of time doctors and nurses have and how efficiently they manage data.

He said: “The core distinguishable value that’s provided in healthcare is the expression of empathy that occurs in a closed door between a doctor and a nurse with a patient at a time of their greatest need – that’s our excitement about AI and how we can continue to enhance that.

“We’re proud of some of the success that we’ve had, and that we’ve been the number one heart and heart surgery provider based on quality and safety statistics for 24-straight years, and number one in neurology.

“We were also recently named by Newsweek as the number two hospital system in the world.

“What’s allowed us to have that success has been innovation, and our desire and thirst to continue to embrace technology.”

Currently ranked as the world’s second best hospital, Dr Donley believes several features have been critical to his organisation becoming so successful.

Operated as a consultant-led platform, Cleveland Clinic’s healthcare system is vital to bringing the patient’s perspective to the centre of decision making.

For example, the hospital had a $272m (£214m) research budget that was funded from its own operations last year.

He said: “We’re a non-profit entity, so all of our surplus at the end of the year gets reinvested back into the organisation, which then allows us to fund some of the projects in the centre – we also think it’s critical to invest in research and education.”

Last month, the National Institutes of Health awarded Cleveland Clinic researcher Dr Jay Alberts a five-year, $3m (£2.3m) grant to conduct a trial on the long-term effects aerobic exercise can have on slowing the progression of Parkinson’s disease.

The Cleveland Clinic CEO said: “We’re one of the largest education programmes for trainees in the US.

“And that’s critical. It’s critical in any industry that wants to be on the front edge of innovation and discovery – and it’s the same in healthcare. So it’s a big part of our organisation.”

“It’s important how we embrace and interact with AI, I myself am a practicing orthopedic surgeon. ”

How  healthcare providers can increase engagement with patients to express empathy

Cleveland Clinic is known to have pioneered many medical breakthroughs, including coronary artery bypass surgery and the first face transplant in the US.

The hospital also performed its first-ever fetal surgery for spina bifida this year – a birth defect that is most often discovered during a routine anatomy scan.

The operation successfully repaired a child’s spinal birth defect while she was still in her mother’s womb when the fetus was at 23 weeks.

In 2014, Cleveland Clinic established an e-hospital – an in-house telemedicine programme – to provide better access to staff and experienced critical care nurses during the night.

The technology-driven programme allows caregivers to monitor the most critically-ill ICU patients through a remote system that allows doctors and nurses to respond to patient needs even more quickly.

“In this one area, we’re now able to monitor these 200 patients, and we developed algorithms for the blood pressure, respiration and for the different parameters of data that come in here.

“Those algorithms allow us to have two doctors and two nurses, monitoring these 400 beds, so that the patients who are most in need come highest on the screen and get the most attention.

“And it allows us to focus the resources to the patients that need those so that we can improve those outcomes.”

But technology comes at a cost, and as the clinic is made up of a system of providers with almost 4,000 consultants and 60,000 employees, the Cleveland Clinic system creates a significant burden for its doctors and healthcare professionals.

Hospitals are investing heavily in healthcare AI, with spending to reach $6.6bn (£5.2bn) annually by 2021, according to a 2018 report by multinational professional service company Accenture.

Dr Donley estimated that 50% of a nurse’s time and 17% of a physician’s time is non-clinical, which “erodes” productive time in delivering the core distinguishable value – expression of empathy.

He added that, despite it improving society and outcomes, expansion of knowledge getting rid of productive time as it’s “become a burden at the level of care”.

“And when you think of that right down to the level that doctors and nurses provide care, it’s an overwhelming amount of knowledge and technology.

“The data that’s becoming available is another tremendous opportunity, but also a tremendous burden if it’s not handled correctly, which is why AI is so important to healthcare and how we provide care.”

How to reduce burnout experienced by consultants

Burnout is a syndrome characterised by emotional exhaustion that results in depersonalisation and decreased personal accomplishment at work, which was recognised as a disease for the first time by the World Health Organization last month.

The agency now includes the term in its International Classification of Diseases handbook, where it’s described as a work-related condition resulting from chronic workplace stress that has not been successfully-managed.

Cleveland Clinic’s Dr Adrienne Boissy asked its own physicians about burnout, surveying more than 1,500 of them, with 35% reporting at least one symptom.

Dr Donely attributes the condition to technology expanding knowledge that is significantly reducing the cost of  genomic data.

He explained: “There’s more than a million people that have had their genome sequenced, and it is predicted in the next ten years – it will be up to a billion people – even certainly here in the UK where most of that has been led.

“The UK has been a significant leader on genomic data. But again, technology and knowledge expansion, and the expansion of data from sensors and wearables is tremendous amount that has led to a ‘burnout’.”

Using AI to automate data collection and data analysis can allow healthcare staff  to have more time for interpretation and counselling, which is where the expression of empathy occurs.

Earlier this year, the medical clinic established a center to advance the use of AI applications and focus on leveraging machine-learning technology to improve healthcare delivery in areas such as diagnostics, disease prediction and treatment planning.

“We have aspirations to become the world’s largest and most collaborative center for Innovation and advancement of AI in healthcare.

“We’ve been on this pathway for years, we actually embraced IBM Watson for health management and have taken data from 1.5 million admissions, so we’ve had an electronic medical system for a long time.

“It’s allowed us to have close to a billion points bytes of data in one system enhancing the outcome for the safety for patients, and allow more time for the expressions of empathy from doctors and nurses.”

The clinic currently has 15 on-going projects using AI, one being based on predictive readmission using a supervised machine learning programme to predict outcomes, readmission and the length of stay.

How Cleveland Clinic will operate once London branch opens in 2021

The new digital hospital in London will be the Clinic’s third location in a foreign country and another step in the health system’s international expansion strategy.

Construction is expected to be finished by the end of 2020, with the facility opening to patients in early 2021.

Dr Donley said: “What we will do there is leverage all the strength that we have learned to date here in London -this will become the UK’s most digital hospital.

“We will have no paper allowed in this hospital – it will all be electronic including all our interactions in the hospital.”

Cleveland Clinic London will have a full imaging suite, a full neurological suite with rehabilitation and will offer specialty services for general surgery, cardiology and neurology.