SugarBeat, an adhesive patch system that can check blood sugar levels for Type II and pre-diabetics patients, has gained the CE mark 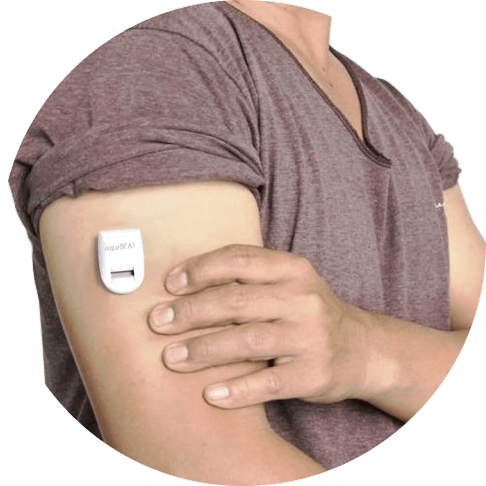 Insulin users can adjunctively use sugarBEAT when calibrated with a finger-stick glucose reading (Credit: Nemeura Medical)

A disposable patch that provides diabetic patients with a real-time look at their sugar levels has been dubbed the world’s first non-invasive continuous glucose monitor (CGM) and will be entering the healthtech market after receiving the European CE mark of approval.

The new wearable sensor, SugarBEAT, developed by medical technologies company Nemaura Medical, doesn’t require any needles used for glucose analysis as it draws the tissue fluid from the skin by passing imperceptible electric current through the skin.

Dr Faz Chowdhury, CEO at Nemaura Medical, said: “We are very pleased to report CE mark approval in Europe for SugarBEAT, which is the world’s first non-invasive, needle-free CGM.

“Given these benefits, we look forward to aggressively entering both the multi-billion-dollar diabetic (insulin and non-insulin dependent) and pre-diabetic markets.

“In addition, we plan to target the wearable health tech market for health-conscious consumers, which is experiencing explosive growth.”

Given the pace at which the wearable healthtech space is growing, SugarBEAT is best-placed to disrupt the multi-billion-dollar global diabetic and pre-diabetic markets, says GlobalData, a market intelligence company.

The World Health Organization has reported more than 420 million diabetics worldwide and the number of pre-diabetics at almost three times this number increasing the risk of premature deaths and one of the most pressing health issues globally.

The daily disposable patches connects to a rechargeable transmitter to measure and present the glucose readings in real-time, thereby creating a glucose profile chart where the patterns, the extent of fluctuations and out of range glucose levels can be observed.

GlobalData medical device analyst Renuka Sreeramoju said: “The high unmet need of standard finger stick testing and the painful insertion of CGM device under the skin can be achieved by the availability of Bluetooth-enabled smartphone CGM wearable device.”

The Bluetooth-enabled SugarBEAT smartphone app displays glucose readings every five minutes while the patch is worn on the arm.

Alerts indicate when glucose levels are falling or rising above minimum and maximum thresholds.

Mr Sreeramoju added: “Due to its non-invasive nature and relatively low cost, SugarBEAT is expected to give tough competition to the invasive CGM devices and attain a strong position in both diabetic, pre-diabetic and wearable health tech markets in future.”

CSM devices reduce or eliminate the need for routine finger stick testing, depending on the device with patients benefit from knowing where their blood glucose levels are trending during the day and night.

Dr Chowdhury said: “The inclusion of our new predictive alert capabilities will also have particular appeal to Type I diabetics who are at higher risk of hypoglycemia, or very low glucose levels.

“Insulin users can adjunctively use SugarBEAT when calibrated with a finger-stick glucose reading.

“In addition, given the flexibility and non-invasive nature of the device, we look forward to targeting the growing $60bn (£47.35bn) wearable health tech market through partnerships with leading smartphone and wearable manufacturers.

The company studied the device in 75 Type I and Type II patients over 225 days whose blood samples were taken with a catheter every 15 minutes over a 12-hour period.

This was done for three non-consecutive days, generating over 12,000 paired data points.

SugarBEAT will launch in the UK and German markets and also be submitted for a US Food and Drug Administration regulatory approval later this year.