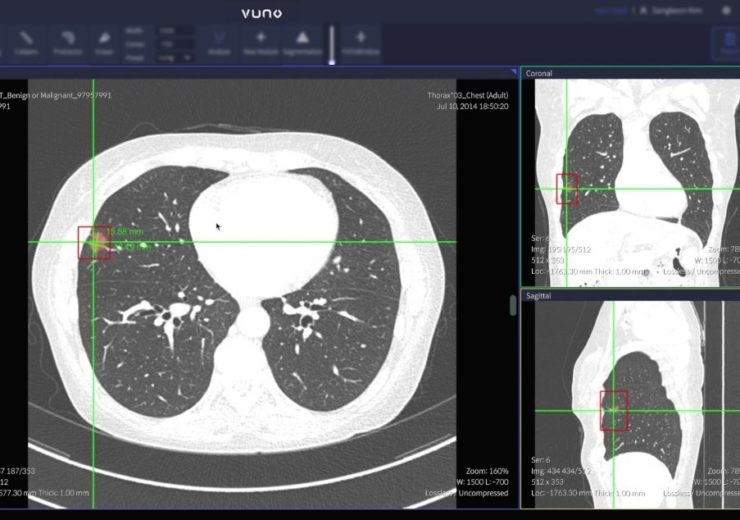 VUNO, a member company of the Born2Global Centre, announced that the first CT based pulmonary nodule detecting AI solution in Korea, “VUNO Med-LungCT AI”, was approved by the Ministry of Food and Drug Safety. The AI solution that effectively detects pulmonary nodules is set to become a valuable lung cancer diagnostic tool for healthcare professionals in Korea.

This solution received PMDA (Pharmaceuticals and Medical Devices Agency)’s official approval in December 2019, proclaiming its compliance with relevant Japanese regulations, which represents a remarkable milestone for VUNO. The product is now at a full-fledged commercialization stage in Japan.

VUNO Med-LungCT AI is the first medical AI solution to receive MFDS regulatory approval based on multi-center clinical trials carried out by three major hospitals, Kangbuk Samsung Hospital, the National Cancer Center, and Asan Medical Center. According to the results, this solution demonstrated high detection levels with a low false positive rate, proving its high effectiveness. It is the first Korean computer aided detection software (CADe) that detects lung nodules based on AI in chest CT, and its performance is one of the best in the world.

Proven to be the best pulmonary lung nodule detection model, it will be effective lung cancer screening tool

Pulmonary nodules are round shadows that appear in the lungs with a diameter no larger than 3 cm, and their early detection is paramount as they may be indicative of early stage lung cancer. From August last year, the Korean government began screening for lung cancer among those in the high-risk group. There are hopes of increasing the survival rate of lung cancer patients in Korea by detecting them earlier through CT scanning. However, because more people are being scanned, combined with the high difficulty level of reading the images, many express concerns of regarding added workloads for radiologists.

VUNO Med-LungCT AI detects and quantifies the size and volume of lesions based on CT images within one minute. It is expected to aid the work of radiologists with improved reading accuracy and efficiency by detecting nodules that may easily be overlooked.

First, medical staff can check the preliminary information provided by the solution and with a click of the mouse, they are given further information categorized based on Lung-RADS, the official Lung CT Screening Reporting and Data System.