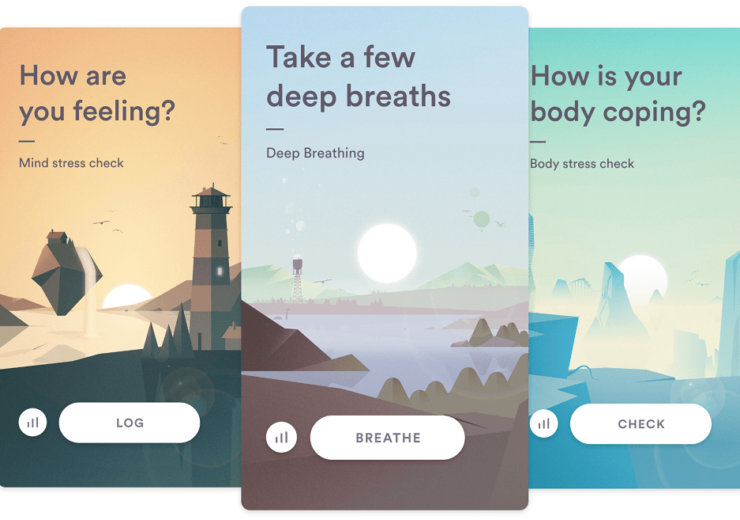 Individual stress management and global mental health issues could all be managed with the help of an AI-powered app fed real-time data by sensors in smartphones and wearable devices, according to UK-based healthtech Biobeats.

The technology was originally developed as an entertainment and musical biofeedback app, but the BioBeats team re-imagined the technology after CEO and co-founder David Plans suffered a heart attack in 2003 — which was blamed on stress, exhaustion and burnout.

Working with sensors in phones or wearables, the BioBeats algorithm can predict when an individual’s stress levels start to negatively impact their mental and physical health. A technology that could have prompted Dr Plans to evaluate his lifestyle before reaching the stage of a potentially fatal heart attack.

He said: “What drove me to create the company in the first place was a life event which showed me I need to handle my own mental well-being better. I was nearly killed after taking a rather stressful period.

“I collapsed, flat-lined even, and awoke to a nurse advising me of how lucky I was to be alive, and how vital it was to make changes to my lifestyle to be well.

“This terrifying experience led me to question why things needed to get so bad before I, and others in similar situations, understood changes had to be made.

“I hypothesised that heart rate variability, something which can be measured by a wearable device, when married up with a psychometric and journaling app, could provide insight that would allow people to take action before stress and unmanaged trauma manifested into something more sinister.

“I began working to carry out scientific research to investigate this further, and in 2013 BioBeats was formed.”

Over the past decade, technological advancements have greatly enhanced effectiveness in most medical fields. With this vast amount of technology available, companies have come up with distinct ways to diagnose depression, anxiety and bipolar disorder at an early stage.

The team of scientists and designers at London-based BioBeats are focused on creating features that enable better interoception, which is the study behind the mind-body connection to detect, understand and attempt to tackle the likes of mental illness.

the BioBeats app — called BioBase — is a wider well-being development course that connects to a wearable known as a BioBeam, which collects data such as heart rate variability, sleep efficiency and levels of activity.

With AI as the main function, it adapts and personalises for each user as BioBeats’ algorithm determines what aspect the user needs to improve and what they need to optimise.

Dr Plans says that because these metrics result in vast amounts of data, AI is employed to analyse it for user personalisation.

“AI allows BioBeats to analyse an individual’s health data to look for patterns that link compromised well-being with an increased risk of physical and mental illness,” he explains.

“It’s actually the AI that makes BioBeats so useful, as our technology is able to predict potential health crises before they happen, and via the BioBase mobile app, provide personalised, evidence-based well-being content and courses that can help to prevent an escalation.

“The predictions and aids will become more accurate and effective as machine learning insight further develops by learning from the individual’s behaviour, and sees trends for both her/him and wider group or company trends from anonymised aggregated data.”

According to a survey conducted by YouGov, on behalf of UK charity the Mental Health Foundation, stress is usually a reaction to an excessive amount of pressure and demands placed on someone.

What contributes to stress varies from person to person, depending on the likes of social and economic circumstances, the environment a person lives in and genetic make-up.

The YouGov poll — one of the largest on this subject — revealed 74% of people have felt so stressed they have been overwhelmed or unable to cope in the past year.

In addition, negative behavioural changes were reported, with 46% sharing they ate too much or ate unhealthily due to stress with harmful habits such as drinking alcohol also jumping by 29%.

Why is BioBeats unique compared with other AI devices for mental health?

“My experience in 2003 was not just a wake-up call for myself, but for how we as a society treat work and create a toxic workplace, which fosters high-stress, competitive environments that in no way support the mental well-being of employees.

“The more I researched, the more concerned I became.

“In fact, more recent studies show the average worker loses 20% of their productivity due to stress, anxiety and depression, 87% of employees are disengaged and over-stressed at work, and £39bn is spent on sick days in the UK alone.”

Burnout is a syndrome characterised by emotional exhaustion that results in depersonalisation and decreased personal accomplishment at work, which was recognised as a disease for the first time by the World Health Organisation this year.

The agency now includes the term in its International Classification of Diseases handbook, where it’s described as a work-related condition resulting from chronic workplace stress that has not been successfully managed.

As a fellow at the Alan Turing Institute, Dr Plans has been researching the science behind mental well-being, and how AI and machine learning can further analyse people’s mental state for improved overall health.

Dr Plans explained he has not only been responsible for developing the company vision and business strategy as a CEO, but has also been actively involved in product development and scientific research, due to his background in psychology, neuroscience and AI.

He said: “The problem is abundantly clear. With my experience in this space and problems I had been noticing in the workplace, I saw an opportunity to bridge this gap.

“Our tech uniquely combines AI and machine learning, so that BioBeats provides
intelligent, evidence-based, continuous monitoring and coaching programmes for mental well-being and recovery that can be used within companies to promote better mental health and build deeper resilience.”

“As much as I would wish for a permanent solution to mental well-being, the reality is our mental health is something to focus on and nurture on an ongoing basis.

“The beauty of using BioBeats continuously is that, overall, well-being should improve, and outbreaks of mental illness may never occur, thanks to our preventative approach.”