Many elderly with healthcare issues live alone, a Korean start-up is addressing this problem with a system powered by radar signal processing technology 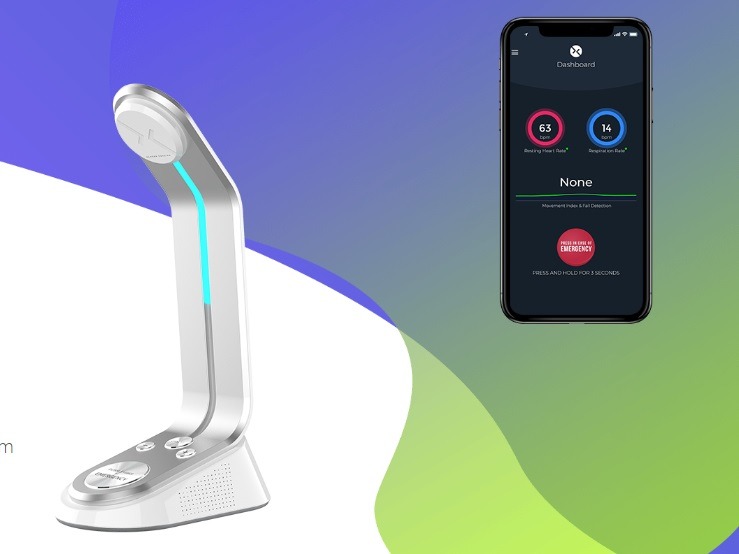 Responding to the demand in healthcare technology for the elderly living alone, South Korean start-up Xandar-Kardian took a different route away from healthcare wearables and built an AI-powered monitoring system requiring no physical contact to receive help from emergency services.

Despite the digital architecture of current healthcare technology being more creative than ever, there remain gaps in meeting the needs and standards of ageing populations, impeding the delivery of efficient digital lifetime healthcare devices.

The elderly engage with the internet and advanced devices differently than younger people, and face many barriers to using or accessing them – NZEL100 PERS was developed to address this issue with radar signal processing as its main focus.

Its hardware transmits up to ten million nano-pulses per second to gather valuable information on its surroundings.

Sam Yang, co-founder and managing director at Kardian, said: “For the past seven years in total, our team has focused on one thing – radar signal processing algorithms.

“The best way to describe our technology is to understand the fact that human beings generate millions of micro-vibration patterns every day.

“When you breathe, you chest moves up and down. When your heart pumps blood throughout your body, it also generates micro-frequencies from the pulse movements.

“We utilise radar technology to obtain the raw data and detects such data through its algorithms. In other words, we are the ‘Microsoft’ of the radar industry.

“Using radar, we are able to provide presence detection via vital sign detection, count occupants with their average motion, monitor vital signs and also look for falls to the ground.”

The task of advanced radar signal processing technology is to capture data and provide insights of target information from the radar echo, which enables the detection and monitoring of micro-movements and vibrations such as breathing and heartbeats.

How does the AI device monitor the healthcare for  the elderly at home?

In order for older patients to find comfort in adopting the use of medical technology, an approach where the devices will accommodate their physical limitations must be considered as the learning curve isn’t smooth for this demographic.

As it works with Amazon’s Alexa, Kardian’s NZEL100 PERS main differentiator from other monitoring devices is its patented non-contact solution, which allows the elderly users to call for help in various ways and as well as monitoring  vital signs and sleep data.

Since 2014, the high-tech development company, based in Seoul, South Korea, has been cooperating with medical professionals – including sleep apnea and cardiology specialists to “fine tune the technology” to medical grade standards.

In an emergency, users can send out a voice command, press a button, or wave at the device to either connect with up to nine pre-programmed caretaker contacts  – and if that fails, it automatically connects to emergency services.

Mr Yang explained: “Imagine if someone is having a heart attack while watching TV. In this case, he/she may not even been falling to the ground.

“Contrary to most people’s belief of a heart attack, people do have time to react.

“There are several warning signs such as chest discomfort [pressure/fullness/squeezing pain], pain that goes beyond the chest to other parts of the body, unexplained shortness of breath, nausea or anxiety.

“During this period of time, knowing that you can request emergency medical  assistance as soon as possible, whether it be night or day, provides a peace of mind.”

Kardian’s director highlighted the lack of reliance on phones as they may not be nearby during times of emergency, and devices that require users to push a button can require too much exertion of energy, which puts the elderly in a more vulnerable situation.

“With Kardian, it’s as simple as talking to Alexa except you are saying ‘SOS’ and making a gesture motion,” he said.

“The reason why a gesture motion is required is to ensure that no false alarm will be triggered by relying on just a certain key word.”

The NZEL100 PERS device can also detect falls using AI without the user having to wear a device or use a security camera.

Along with fall detection, the device features Proactive Health Monitoring including resting heart rate and breathing rate, sleep apnea, and a movement index to indicate the person is moving – all the data is shared in real-time with the caregivers during an emergency situation.

How will the technology evolve over the years?

The senior tech market isn’t small. Given the growth prospects of an aging population worldwide, it is no surprise that the assisted living industry is attracting innovations at a drastic pace.

According to market analysis company BCC Research, the emergence of healthcare devices combined with the growing needs of the elderly population is causing the global market for home healthcare to grow rapidly.

In order to diversify its users within the aging population, Xandar Kardian is developing an advanced version that can power-up the device with just a hand clap or gesture motion for people who are unable to hear or speak.

Mr Yang said: “The system will be upgraded to a sleep apnea monitoring solution via firmware upgrade when it becomes available end of next year.

“Furthermore, heart arrythmia is also an area that is under heavy research at the moment using just radar.

“The goal for Kardian is to provide critical information that could help people prevent emergencies from happening in the first place.”