3D printing and the new medical frontiers it opens hit the headlines earlier this year. With advances in technology and increased government funding, what more can we expect? Andrew Tunnicliffe talks to Peter Mercelis, managing director of LayerWise. 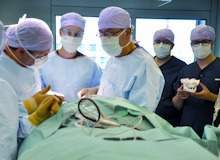 In early 2012, several months after the operation was carried out, news belatedly broke that a 3D-printed lower jaw had been implanted in an 83-year-old woman. According to the project’s leaders, this first-of-its-kind procedure would pave the way for the use of 3D-printed, custom-made implants in humans. To many, it was a new dawn in medical engineering that would advance the boundaries of medical science and herald a new era of treatments.

In part this is true. But it is just one of a number of breakthroughs announced over the past few years. Using additive manufacturing, researchers around the world have been working on the development of hard and soft tissue 3D printing for medical purposes and were able to create a bone-like material and artificial blood vessels with some success.

Although their work is ongoing, they believe it is the first important step towards developing new treatments for some of the world’s most challenging medical dilemmas in physical trauma and organ transplantation.

"But 3D printing and its use in medicine is not completely new, although it hasn’t been used in this way before," explains Peter Mercelis, managing director of LayerWise, which manufactured the lower jaw that was implanted into the 83-year-old woman in June 2011 by using a 3D printing process for metals.

He says 3D printing has been used a lot for generating operations models that mimic the patient’s natural anatomy as an aid for the surgeon.

"Researchers have been working on the development of hard and soft tissue 3D printing for medical purposes."

"Or models that can be used to create indirect tools to produce an implant, for example, a mould cavity, so the surgeon or the assistant can cast a custom polymethyl-methacrylate implant," he adds. "In that way, the indirect shape of the implant was produced with 3D printing, from which they could generate a custom implant for a patient.

"We have a 3D CAD file of the object we want to manufacture," continues Mercelis. "We slice it into a stack of 2D layers using software, and from this manufacture each individual layer of the 3D object by melting metal powder with a laser beam, beginning from the bottom."

A thin layer of metal – usually titanium – is deposited and then heated with a focused laser beam to melt the first cross-section of the object. The powder material solidifies to become a solid layer again.

"We then lower our build platform and deposit a fresh layer of titanium powder, which becomes the second layer of the object," explains Mercelis. "We scan it again and fuse it to the first layer. It is a continuous process of laser scanning, depositing a new layer of powder and scanning again. So the object we make comprises thousands of layers."

By working in this way, technicians are able to reduce the 3D complexity of the end product to a 2D problem, allowing them to create intricate shapes. This process, Mercelis says, is well suited to the creation of anatomical shapes for a specific patient, or an anatomical design of a serial manufacturing implant.

Although research into this field is not new, it has been hampered by the lack of technology to produce implants in a biocompatible material. Mercelis says 3D printing for metals that can generate a fully functional model with the required mechanical performance and material purity is only a recent phenomenon.

And manufacturing is only part of the process. Creating the implants needs a lot of expertise, from manufacturing to medical engineering. But the entire process begins with the doctor’s examination.

"Technicians are able to reduce the 3D complexity of the end product to a 2D problem, allowing them to create intricate shapes."

For patients requiring some form of implant, the decision has to be made whether a standard device will meet their clinical needs and, if not, whether a custom implant will. Once the clinical decision has been taken, the surgical team liaises closely with a medical engineering office – professionals in biomedical engineering and the conversion of medical imaging data into 3D models.

The patient undergoes a series of CT or MRI scans from which the data is converted into a 3D model. Working with the surgeon, the engineer designs the optimal implant. The design is then converted to a model suitable for manufacturing, which is where companies such as LayerWise get involved.

"The total cycle, from the initial idea to the operation to install the implant, can take just days or weeks," says Mercelis. "In most cases, we work with the engineering offices so there are three parties involved: us, the manufacturers who physically produce the part; the engineering office, which is the bridge between manufacture and the surgeon; and the surgeon."

The introduction of mass production and the production line was a pivotal moment for manufacturing and wider industry at the beginning of the 20th century, and additive manufacturing could prove to be just as influential.

In a 2011 BBC News article, Neil Hopkinson, a senior lecturer in the Additive Manufacturing Research Group in the UK, said additive manufacturing could make offshore manufacturing a thing of the past as it becomes far less cost-effective compared with having components printed locally.

"3D printing for metals that can generate a fully functional model with the required mechanical performance and material purity is a recent phenomenon."

He said: "Rather than stockpile spare parts and components in locations all over the world, the designs could be costlessly stored in virtual computer warehouses waiting to be printed when required."

But, warns Mercelis, this is an unlikely scenario for the manufacture of medical implants, at least in the short term.

"Something to take into account is that it is still not a cheap technology," he says. "Because of budgetary problems in most European healthcare systems, this won’t be the technology used for all medical implants in the future because it will lead to an increase in the implant costs, especially on large and voluminous implants"

Despite the economic climate, there is a case to be made for using 3D printing, he argues. "If you take into account the total cost of a surgical procedure – not just the implant costs – typically what you see with custom-made implants is three big advantages," he says. These are:

"In order to compare the costs between standard implants and those created using additive manufacturing, it’s important to look at the total cost to society," says Mercelis. "That is still a difficult thing to convince people about."

There are other benefits that additive manufacturing offers the medical community and the patients it serves. The first is increased functionality of implants or devices by making more complex shapes and integrating porous regions, as well as transportation channels for fluids such as medication. The second is innovations in the development of new components.

Because additive manufacturing is a completely digital technology that does not need any tooling, the development process can be increased, which is an important advantage to medical device companies in today’s competitive market. But there are still challenges ahead, concedes Mercelis, one being build rate.

"It is a rather slow technology that is not well suited to producing tens of thousands of devices," he explains. "There is a big difference depending on whether it is a small-volume product such as a spinal or dental implant or small-joint orthopaedic device, and a more voluminous part such as a knee joint."

Mercelis says his company and the industry as a whole is working towards improving the economics of these machines while making them more precise, something that will make this technology available for more types of implants and applications.

"We’re also working on accelerating the actual laser melting technology so we can introduce it also to different industrial fields," he adds.

In August 2012, the Obama administration announced plans to establish the National Additive Manufacturing Innovation Institute (NAMII) in the US. The NAMII, it said, will provide the innovation infrastructure needed to support new additive manufacturing technology and products with the aim of becoming a global centre of excellence.

But despite the growing interest in additive manufacturing, Mercelis argues it will not necessarily replace traditional methods, but will also create synergies with existing manufacturing technologies. "That way you can use the best of both worlds," he says.

"Because additive manufacturing is a completely digital technology that does not need any tooling, the development process can be increased."

"It is important to realise that additive manufacturing should not be used to replace existing technology, but to make full use of its potential," he says. "Although we are now at a level where we can make real functional parts, the maturity of the technology is still in its infancy. If you compare it with a technology like milling, one that has been used for decades and is at a very high level in terms of precision and economics, we still have quite a way to go."

Perhaps with the rise in funding announced by governments, and the increasing involvement and collaborations between academia and private industry, innovations in additive manufacturing may begin to come thick and fast in the coming years. But it should be seen as its name suggests – another ingredient to the entire manufacturing recipe. While the news that an 83-year-old woman received a 3D implant was indeed a first, it certainly won’t be the last.