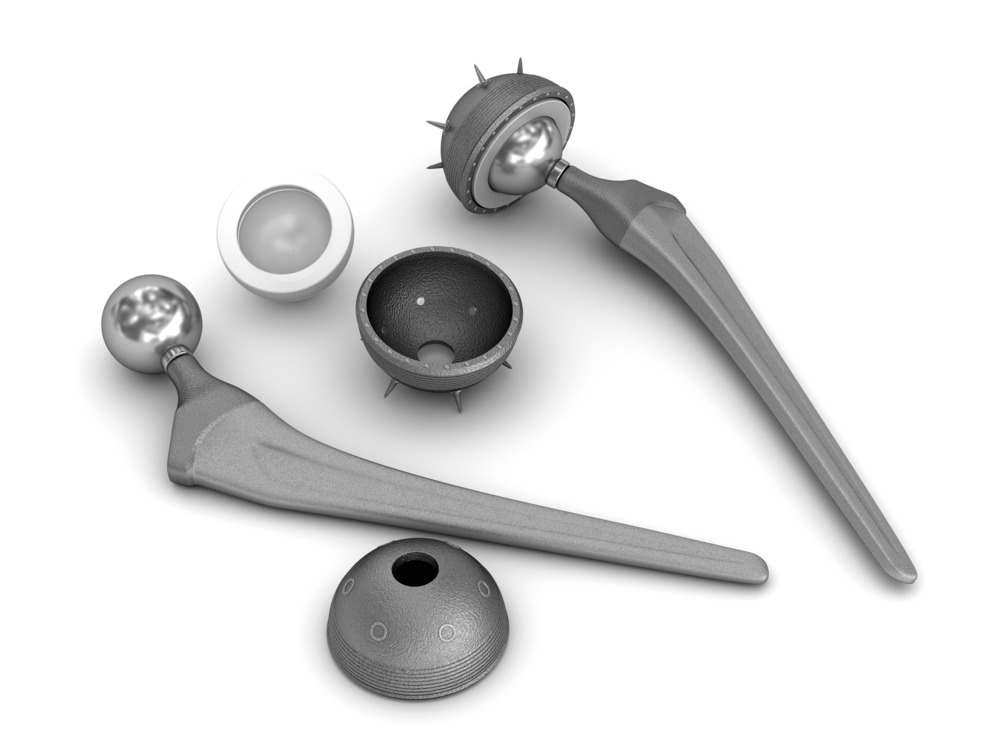 There's a need to improve the longevity of implants that replace joints in a number of areas in the body (Credit: Shutterstock/BioMedical)

Artificial joints were a breakthrough in medical technology and are still the go-to treatment for severely damaged or worn hips and knees – two of the most common joints to be replaced. But the cohort of patients undergoing this type of surgery are getting younger, and with replacement materials made to last for between 15 and 20 years, implants can no longer be a one-size-fits-all treatment. University of Leeds mechanical engineering professors Richard Hall and Michael Bryant explain to Peter Littlejohns how their newly-launched project is putting the next generation of implants through rigorous testing procedures.

One of the perils of ageing is a progressive weakening of the musculoskeletal system, and a common condition to develop in over 65s is osteoarthritis.

The disease presents as cartilage worn down to an extent that it’s clear the natural repair functions of the body are failing to keep up with wear on a joint.

Although cases of rheumatoid arthritis, osteonecrosis (bone death), fractures and bone tumours can require surgical intervention, osteoarthritis is the leading reason for the 450,000 total hip replacements and 754,000 knee replacements performed each year in the US.

In the UK, where the University of Leeds is undertaking the research, the number of replacements is 160,000, split almost equally between hip and knee implant procedures.

“There were ad-hoc developments in joint replacement, particularly around the hip, in the last century, but it was Sir John Charnley at Wrightington Hospital in Wigan who was the first person to develop at any real scale the implanting of artificial hips,” says University of Leeds School of Mechanical Engineering professor Richard Hall.

“He built himself a relatively large practice and would do the hip replacements on a Thursday and manufacture the cups in his garage on Wednesday afternoons.”

Charnley pioneered total hip arthroplasty – a surgical procedure to restore the function of the hip joint – in the 1960s, and modern procedures still adhere closely to his original design.

Charnley’s predecessors in the field of hip replacement encountered several issues that he himself experienced in the few failed attempts he made before he arrived at the pioneering design seen today.

These included loosening of the prosthesis components and the displacement or failure of the “cup” – the mechanism designed to replace the ball and socket joint that enables hip flexion.

But the incidence of hip and knee replacements is growing, and with a larger cohort of younger recipients, some of the issues with original joint replacements are reoccurring.

Total hip and knee arthroplasty are both “reasonably successful” operations, according to Hall, who cites a 5% failure rate at the 10-year mark of an implantation.

The issue with this data is that many participants were over 60, and it is those under this age that face the risk of an artificial joint failing due to variable activity levels and excess body weight stressing the implants.

Modern medicine has extended the average life expectancy of patients to a degree that even over 65s could need their hip or knee hardware replaced before they pass away.

With this shift in longevity coalescing with a growing number of younger patients needing implants, Hall, along with his colleague professor Michael Bryant, say there’s a need to update artificial joints.

“There’s been an evolution,” says Hall.

“But now it’s not uncommon for people to have implants in their 40s to late 50s.

“We know life expectancy now is around 80 to 85 years, so we’re expecting hip replacements to last 40 years, whereas the original idea was that you implanted these in a 65 year old who might pass away aged 75 or 80, so they only had to last 15 years.”

The option of revision surgery to swap the prosthesis for another is there when joints do fail before their bearer dies, but Hall adds that the second joint is never as effective as the first.

Reasons for this can vary, but tend to be related to the quality of the surrounding bones, which degrades naturally with age and especially so in patients with osteoarthritis, as well as the complexity of modifying implants to adapt them to a bone structure with greater degradation.

Couple this with the fact that revision surgery often requires more time in the operating theatre than an initial implantation, which presents a greater risk to elderly patients anaesthetised for the process, and there’s a clear and present requirement for the next generation of artificial joints to last longer.

The above paints a grim picture for patients with hip and knee implants, but those are the most successful joint replacements.

People needing other types of prosthesis to replace complex joints are not so lucky.

“For a finger or ankle prosthesis, you’re probably looking at a lifetime of a few years,” says Hall.

“So there’s quite a difference and it’s a significant challenge designing non-hip and non-knee joints.”

It’s this challenge, along with the evolution of joint-replacement pathways, that led to the University of Leeds leading an international project – the Advanced Research Training for the Biotribology of Natural and Artificial Joints in the 21st Century.

The coordinated effort – codenamed BioTrib – was launched on January 1 2021 with a £4m grant from the EU, and includes ETH Zurich, Uppsala University, Lulea Technical University and Imperial College London.

“There are two big pushes in the grant that we’ve been awarded,” says Hall.

“One is to look at additive manufacturing to see how different methods can be used to enhance joint replacements, and the focus there is on the tribology – meaning any interaction between surfaces.

“The other is looking at the additional tests we have to do to ensure these joints are truly functional.”

ETH Zurich and Uppsala are designing the next generation of artificial joints to be tested during the project, with approaches including the use of electrospinning to manufacture better-suited materials, and the use of coatings to enhance the biocompatibility and tribology of implants.

The role that Hall, Bryant and other University of Leeds personnel play in BioTrib is the testing of artificial joints, and this is especially pertinent given that younger patients with implants are likely to lead more active lifestyles.

“There’s been a lot of work by other research groups that show within the young there’s at least 50% more activity than in the elderly population.

“We’ve had a number of grants recently to look at how people use their joints in everyday activities like standing, walking, sitting, running and twisting.

“We then looked at the loads and motions applied to the joint and used them in our simulators, which are machines that can apply relatively high loads.”

According to Hall, the standard means of testing artificial hip and knee joints includes using similar devices, but only to simulate the impact of walking.

But neither he or Bryant believe this is adequate, and they’re attempting to improve testing procedures by putting the prosthetics through more rigorous assessments to reveal their weaknesses.

“We found in the early 2000s that a lot of metal on metal joints put in the body had subsequently failed because of the release of metal ions and metal debris.

“Unbeknown to the manufacturers, the joints would fail at a faster rate than normal because of adverse loading and edge loading.”

Edge loading is where the contact between head and cup of the replacement joint extends over the cup rim, disrupting the lubrication mechanism and exerting pressure that increases wear on it.

“You’d only really test for this if you knew it was going to occur,” explains Hall.

“People at the time didn’t, but there’s been a lot of development around edge loading scenarios and adverse testing since.

“Our idea was to bring that to the fore in this particular grant and to test these new devices, these new biotribologies, by using adverse loading regimes to see if they stand up to a wide spectrum of loads and motions.”

The challenge of testing longevity in artificial joints

One challenge in conducting adverse loading tests is that the march of innovation in artificial joint technology can’t wait 15 or 20 years for the validation of new materials and designs in prosthetics.

This is where the team at Leeds have to apply some mechanical engineering alchemy to speed up the process, but Bryant says doing so with accuracy is still very much a work in progress for the entire orthopaedic research community.

“The simulators will run for a period of time that we think will replicate a wear rate typically expected in vivo, but the challenge is how we view that data,” he adds.

“Hip simulation can be viewed and used to interrogate mechanisms of wear, the tribology and more recently the corrosion.

“One of the challenges that comes with progressing the simulation techniques are that we want to have something that’s realistic and representative of patients’ activity, but to do this exactly would require 15 or 20 years in the simulator.

“So we do streamline that by accelerating it to a certain degree – but there are still quite a lot of questions around how to do that effectively and appropriately.”

Designing a testing protocol that effectively replicates human activity is another goal that BioTrib will attempt to meet in the four years it has runway from EU funding.

But it’s a big task, and Hall is already looking for additional investment, as well as hoping to negotiate another grant from the EU.

In the meantime, Bryant his colleagues hope to shift the priority of artificial joint testing so that assessment procedures involve a holistic view of an implanted joint, including wear, tribology and corrosion – rather than just a walking test based on wear.