A look at spider webs and how using the material as a coating could potentially be key in tackling bacterial infection. 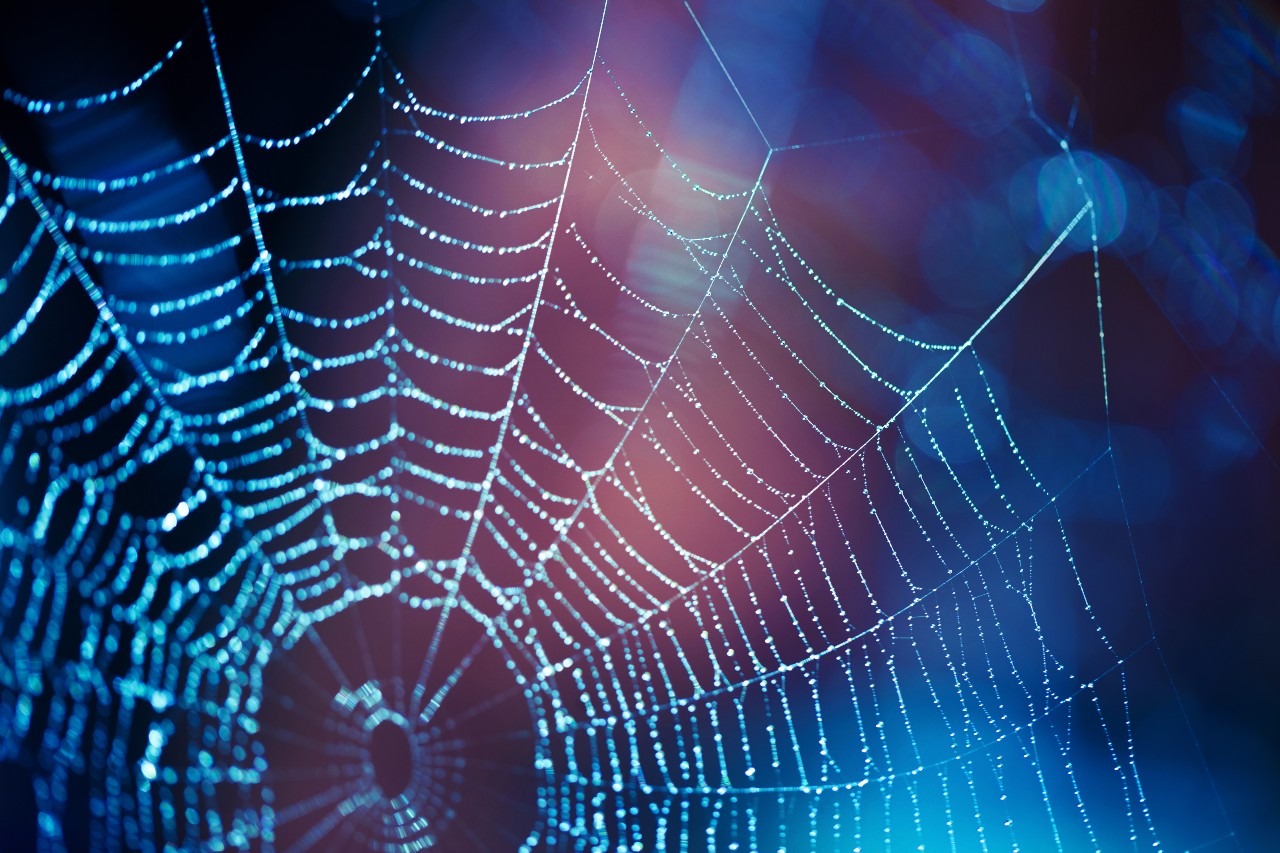 The next step is 3D printing spider silk with human cells attached, which could help rebuild and even replace whole organs. (Credit: Sugarless/Shutterstock.com)

When spider webs get inside, our first impulse is to clean them away. But the sticky filigree isn’t dirty in itself. In fact, the spider webs we try to keep out of our houses might be the key to tackling bacterial infection in our bodies as a coating on implants. Natalie Healey speaks to spider-silk researcher Thomas Scheibel at the University of Bayreuth, Germany, to find out more.

After hours of scrubbing, mopping and vacuuming, you stand back to admire your efforts and congratulate yourself on a successful spring clean. But then your eyes wander to the corner of the ceiling. Strands of sticky silver threads stare mockingly back at you.

Spiderwebs are a homemaker’s nemesis and the usual urge is to dust them away lest your abode be mistaken for a haunted house.

But the sticky mesh could be more helpful to humans than one might imagine, suggests work from a biomaterials team led by Thomas Scheibel at the University of Bayreuth, Germany.

Scheibel has been fascinated by spider webs for over two decades. He says scientists often focus on the impressive mechanical properties of the silk spiders use to build their homes – it can stretch up to 140% in length without breaking – but there’s even more to it than that. For starters, the material is biodegradable on demand. “Spiders can eat a web,” says Scheibel.

“Or it can just hang there in the basement for 200 years.” As such, mimicking spider webs could help us manufacture plastics that won’t have adverse effects on the environment. Spider silk also has a lot to bring to the table when it comes to medical applications.

The material is not immunogenic, which means it does not trigger the body’s invader surveillance mechanisms. Instead, spider silk is essentially shrouded in an invisibility cloak that allows it to hide from the immune system.

This property could be useful for implantable medical devices, which are often registered as foreign objects by the body, leading to scar formation, poor healing and discomfort for patients. If you coat the implant in spider silk, reasons Scheibel, the immune system won’t spot it and it won’t be rejected.

The Bayreuth team has recently discovered yet another advantageous quality of spider silk – it can repel microbes. This could have benefits for medical device implantation too, as it currently comes with a widely underestimated risk of infection.

Over half of the nearly two million healthcare-associated infections reported by the Centers of Disease Control each year in the US are attributed to indwelling medical devices.

Bacteria or fungi can thrive on an implant’s surface, grouping together to form an invisible biological barrier called a biofilm, which cannot easily be removed by antibiotics or cleaning agents. The microbes can then migrate into the adjacent body tissues, interfere with the healing process and cause life-threatening infections.

Understanding spider webs as a coating

The sterile quality of spider webs isn’t an entirely new discovery. It has been speculated about since ancient times. “Two thousand years ago, people used spider webs as wound coverage devices,” says Scheibel. “They didn’t know why – they just knew it worked.”

A more detailed understanding of the specific mechanism behind spider silk’s non-fouling effect was lacking until very recently. “It took us eight years to find out the reason spider webs are microbe-free,” reveals Scheibel, noting that it seems counter-intuitive that cobwebs repel pathogens.

Spider webs are composed of proteins, themselves made up of amino acids, which should be a valuable source of nutrition for microbes.

To make matters more confusing, the surface of the web’s silk fibres consists of a mixture of proteins and lipids that vary depending on the species of arachnid and the environmental conditions under which the web is formed. This makes it difficult to study the way spider silk can inhibit bacterial or fungal infestation.

It is also tricky to produce natural spider silk in the lab. Spiders only make a tiny amount of their robust thread. Luckily, Scheibel has a patented process for reproducing spider silk proteins without having to wrangle any of the pests themselves.

It relies on E. coli bacteria that are genetically reprogrammed with genes from the common European garden spider. The modified bacteria are given a feed of beets and sugar cane, which they ferment to produce the raw material for spider silk. That’s just the first step.

Spinning this product into the fibres spiders use to make webs is also challenging to replicate in the laboratory – each rope contains over 1,500 silk strands. It is another process that has taken years to perfect, but Scheibel now has a mechanical system that copies the way spiders extrude the thread for spinning their webs.

When he finally cracked the technique, he co-founded start-up AMSilk in 2014, which produces spider silk in industrial quantities for various industries, including cosmetics and sportswear.

Webs must ward off microbes in one of two ways, figured the researchers. Either the silk fibres themselves contain an antibiotic substance or the web’s molecular structure is the culprit.

The team hypothesised that the shape of the silk fibres prevents bacteria from accessing nitrogen, which is necessary for their growth. To test the theory, the engineered spider silk was exposed to several species of biofilm-forming microbes, including superbug Staphylococcus aureus and fungal tyrant Candida albicans.

The same experiment was performed on three other materials as controls – a silkworm protein, polycaprolactone plastic, and gelatine. Engineered spider silk emerged as the winner – it repelled the pathogens in all experiments, unlike the other materials.

The next stages of development for medical devices

Atomic force microscopy helped explain why certain materials stave off bugs while others are quickly colonised by them. “There are these hydrophobic islands within a hydrophilic surrounding,” explains Scheibel of the spider silk fibre.

“But the distancing of these patches is too far off, so a tiny microbe can’t hold on to it.” In contrast, the other proteins tested have larger hydrophobic (water-repelling) regions, representing a more microbe-friendly surface.

Therefore, it is the structure at the nanometre level that makes certain materials microbe-repellent, says Scheibel. He likens spider silk’s antimicrobial mechanism to a property exhibited by the lotus flower. The topography of this plant’s leaves causes water droplets to form spherical beads that simply bounce right off the surface.

The Bayreuth researchers have so far tested the microbe-repellent function on two types of engineered spider silk materials. One is a fine coating, just a few nanometres thick, which could be used on medical devices.

AMSilk already has a breast implant coating that was originally marketed to camouflage the device, so it is not challenged by the patient’s immune system. “At the beginning, we didn’t know why the silk coating was so beneficial for breast implant patients,” says Scheibel.

“Now we know it is microbe-free. With any implantation, if you can prevent biofilm formation, that helps a lot during the healing process because you don’t get local inflammation.” He hopes the material will soon be used for wound dressings, skin replacements and other medical implants.

Most other microbe-repelling materials are so effective at booting out bacteria that they repel all cells, including human ones. This limits their usefulness in tissue engineering.

To see if that would be the case with spider silk, the team added a cell-binding motif known to enhance cell attachment. When the hydrogel was incubated with a human and bacterial cell culture for ten days, the human cells attached but there was no microbial contamination.

“The human cells win and bind to the scaffold, while the bacteria are just washed away,” Scheibel sums up. “That means it’s bioselective. It allows the good guys to grow and the bad guys are kicked off.”

The next step for the Bayreuth team is to work out how to 3D print the spider silk scaffold with the human cells already attached to its surface. The resulting structure could help rebuild damaged heart muscle and possibly even replace whole organs in the future.

“It’s like building a house with all the furniture and the people living in it at the same time,” Scheibel reveals, suggesting we could soon be more grateful to our eight-legged housemates than we ever thought possible.