A 10-second toothbrush, an AI-powered prosthetic hand and a standing wheelchair are among the healthtech innovations demonstrated at CES 2020 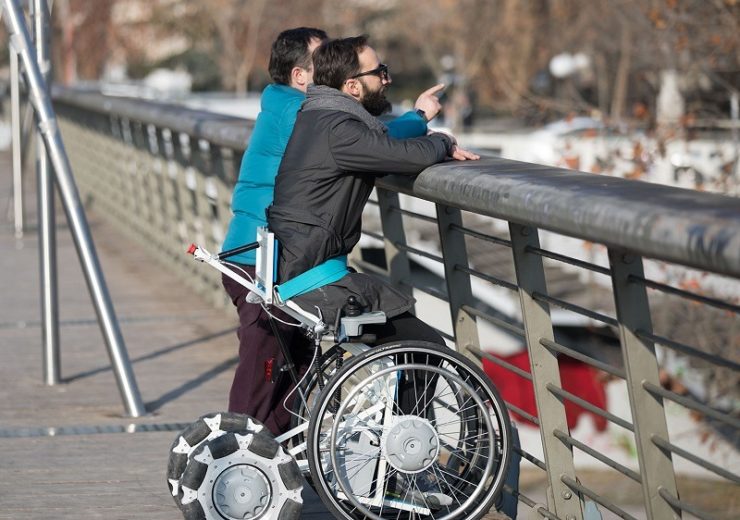 One innovation demonstrated at CES 2020 was a "standing wheelchair" called the laddroller (Credit: Chivas Regal)

From mind-controlled prosthetics to brain-training sleeping aids, a raft of health technology innovations have been on show at CES 2020.

About 4,500 companies – ranging from early stage start-ups to tech behemoths like Samsung and Uber – displayed their inventions at the Las Vegas consumer technology expo this week.

And while the headlines were stolen by flying taxis and “artificial human” chatbots, the event featured plenty of healthtech highlights.

We take a look at seven of the most unique medical gadgets featured at the event.

Automated external defibrillators (AEDs) are nothing new, with the machines highly visible as they are attached to walls of shopping malls, leisure centres and offices in many countries.

But US biotech company HeartHero hopes to go one step further after creating a device that is said to be even more portable and easier to use.

The idea behind the defibrillator is that it can be used anywhere by anyone witnessing a sudden cardiac arrest.

It could be kept in the home or carried in a bag on outdoor trips.

HeartHero says its device is cheaper, lighter in weight and easier to use than other AED products on the market, and its AI capabilities allow it to automatically alert emergency services when paired with a mobile phone.

It claims patients who receive immediate attention with AED devices have a 74% chance of survival – compared to just 8% if they wait for an ambulance to arrive.

French start-up Y-Brush has developed an automated electronic toothbrush capable of cleaning a full set of teeth in just 10 seconds.

The device, which looks similar to a set of retainers, uses sonic vibrating technology and a number of very small brushes to provide an in-depth clean.

After applying their own toothpaste inside the mouthpiece, users place the Y-Brush in their mouth and chew for five seconds, before flipping the device and repeating the process.

Greek architects Dimitrios Petrotos and Marios-Ermis Petrotos have demonstrated the Laddroller at CES 2020 – a wheelchair that allows users to stand up.

By combining an exoskeleton with a powered wheelchair, the device changes shape to provide full support for a range of positions between sitting and standing.

It is also able to overcome gaps and climb small curbs due to having a larger set of wheels at the front – where most wheelchairs have them at the back – making it suitable for use in cities.

Its new Smart Balance device is a board similar to the mats used in interactive video games like Dance Dance Revolution.

Hands down one of the best things I’ve seen at CES so far. @neofect is gamifying rehabilitation. They make the hardware, software, games, and platform. Patients and professionals easily seeing progress over time. #ces2020 pic.twitter.com/p6o1AIbo5Y

Neofect is using this technology to help people recovering from a stroke rehabilitate their legs, and improve their balance and posture.

It also connects to a TV screen and makes the recovery process more fun with a number of games – including one where the user moves their feet in time to the beat of a song.

Unlike many similar devices, however, it only needs to be worn for 20 minutes each day, rather than through the night.

By using an electroencephalogram (EEG) to measure brain activity, and a number of exercises via a mobile app, it stimulates brainwaves associated with better-quality sleep.

US-based robotics company BrainRobotics showed off its prosthetic hand that detects electromyography (EMG) signals in the brain and uses machine learning to turn them into instructions.

At CES 2020, this allowed an amputee to shake hands with someone using the prosthetic device.

.@SmashDawg‘s mind is simply blown by @BrainCo_Tech #CES2020 as he shakes the hand of a prosthetic arm that is controlled by brainwaves. pic.twitter.com/mvdoBhWiGQ

BrainRobotics says one patient has also used its prototype to play the piano, while two others have been able to write using the hand.

US healthcare innovator Aidar Health unveiled its latest product, the MouthLab – a diagnostic device capable of measuring a number of vital signs including heart rate, pulse, blood pressure and temperature.

The small, portable gadget is able to do this anywhere using a 30-second breath test.

Once the patient has breathed into the device, a host of data about their health is recorded and made immediately available to them, their caregivers or a medical professional via a mobile app.