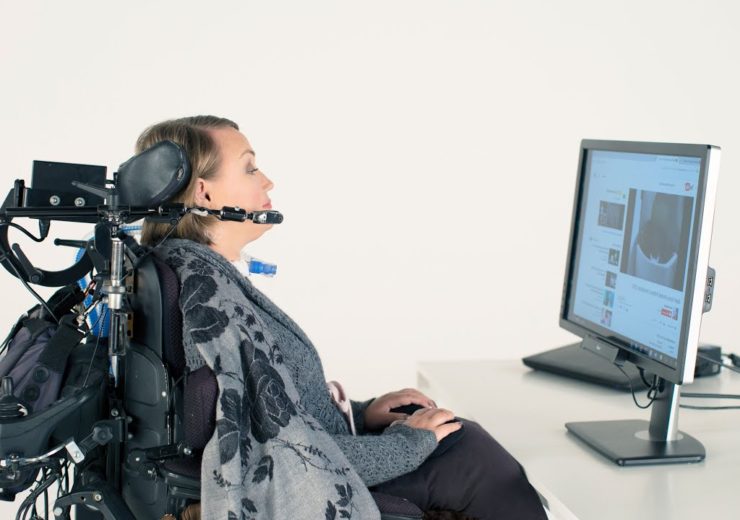 Unlike some assistive devices, eye-tracking technology requires no muscle movement at all (Credit: Tobii Dynavox)

Improving quality of life for people with severe paralysis and lasting spinal cord injuries is one of healthcare’s biggest challenges – but scientists have still been able to use modern technology to produce assistive devices for quadriplegia.

From mind-controlled exoskeletons to technology that is controlled using eye-movement, no stone has been left unturned in the search for a definitive piece of technology to help quadriplegics perform day-to-day tasks.

And as with many industries right now, AI-powered solutions are playing a central role in a lot of these medical technologies.

Here we take a look at a handful of the most innovative and unique devices of this kind, and how successful they have been.

A tetraplegic man was able to move all four of his paralysed limbs with the help of an exoskeleton suit controlled by his thoughts.

Details of this were published as part of a French report in neurology journal The Lancet in October 2019.

Two surgically-placed implants inside his head were used to read his brain activity and transfer them to a nearby computer, which turned them into instructions for controlling the exoskeleton.

This allowed him to move his arms and legs, and even walk for the first time since he was paralysed after falling from a height of 15 metres in a nightclub in 2015.

Scientists from the University of Grenoble and French biomedical research centre Clinatec told BBC News that walking in the exoskeleton suit is far from perfect, and it can only currently be used inside a lab.

But it’s nonetheless a significant improvement on similar technology that allows patients to control a single limb with their thoughts.

Professor Alim Louis Benabid, the author of the study, said: “This is far from autonomous walking. He does not have the quick and precise movements not to fall.”

He added: “We have solved the problem and shown the principle is correct.

“This is proof we can extend the mobility of patients in an exoskeleton. This is in [the] direction of giving better quality of life.”

Tecla-e, the newest version of Tecla, is an assistive device that connects to the cloud and gives its quadriplegic users full access to smart devices including laptops, mobile phones, tablets and smart home technology, such as lighting and thermostats.

Using controls designed for wheelchair driving and ability switches that offer alternative ways of interacting with computers, the Tecla-e means people with limited mobility can pair with up to eight Bluetooth devices at a time, and switch between them easily.

The Tecla-e uses a Wi-Fi-connection to work, and requires an iOS or Android app to configure and remotely control a range of smart technology.

It also claims its battery lasts for 48 hours, and its remote monitoring feature can allow family members and carers to check on Tecla-e users via built-in sensors.

According to Tecla’s website, users have described the technology as “the control centre of their entire life”, while another said they could read for the first time in 13 years.

In 2013, a study published in the Science Translational Medicine journal found that using the tongue to manoeuvre a wheelchair was a significant step forward from the established “sip-and-puff” system for using air pressure to move around.

The clinical trial on which the study was based demonstrated that piercing the user’s tongue with a magnetic stud gave them more independence, as they were able to execute commands quicker and more easily.

Combined with a headset that detects changes in the magnetic field, this sends instructions to a smartphone app, which can execute up to six commands based on the tongue’s position.

Joy Bruce, manager of Shepherd Center’s Spinal Cord Injury Lab and co-author of the study, said: “By the end of the trials, everybody preferred the tongue-drive system over their current assistive technology.

“It allows them to engage their environment in a way that is otherwise not possible.”

The 11 tetraplegic people who used the tongue-drive system performed tasks three-times faster on average when compared with traditional sip-and-puff technology – and with the same level of accuracy.

However, despite its compatibility with everyday devices like smartphones and its supposed superiority, it is yet to become as widely available or used as similar devices that involve the user blowing into a straw to navigate wheelchair movement.

Eye-tracking technology and “gaze interaction-based” devices have been used to help people with severely limited mobility to control their computer using eye-movement, in the same way able-bodied users navigate with a mouse.

By precisely tracking the position of both eyes, the product enables quadriplegic users to perform a number of tasks including surfing the web, sending emails, making phone calls and playing computer games.

This technology uses high-quality camera sensors to track where the user is looking, and is accurate to a distance of 1cm.

Because muscle movement is not required, it has proved to be an effective assistive device for people with quadriplegia, and other disabilities affecting mobility like cerebral palsy and Lou Gehrig’s disease.

As well as navigating a cursor across a screen using eye-movement, users can perform functions like select, scroll and zoom.

Microsoft, meanwhile, launched eye control software in 2017 that enables Windows 10 users to control their mouse pointer and type with an on-screen keyboard.

Voice recognition devices – from transcribing speech to controlling a smartphone

Originally used to help people with dyslexia, voice dictation was a useful way of creating documents and emails without the need for a mouse or keyboard.

This technology has now advanced, however, and speech recognition can be used to take almost full control of a computer – including moving a cursor, controlling mouse clicks and even using a printer.

The upshot is that people affected by quadriplegia can use voice control to independently operate a range of electronic devices.

Nuance Communications claims its Dragon speech recognition technology is the number one software of its kind in the world.

The software learns the way individual users speak and make sounds, in order to optimise how it transcribes their speech and responds to their commands.

The latest version of Dragon is available in eight different languages, and is compatible with both Windows and Mac devices.

It commonly takes the form of virtual assistants, with the most well-known versions being Siri, Cortana, Alexa, and Google Assistant.

However, Komodo OpenLab claims on its Tecla website that these more basic forms of speech recognition technology are limited by practical issues, such as requiring quiet environments and clear language or accents to work properly.