How virtual reality is disrupting treatments and therapy within healthcare 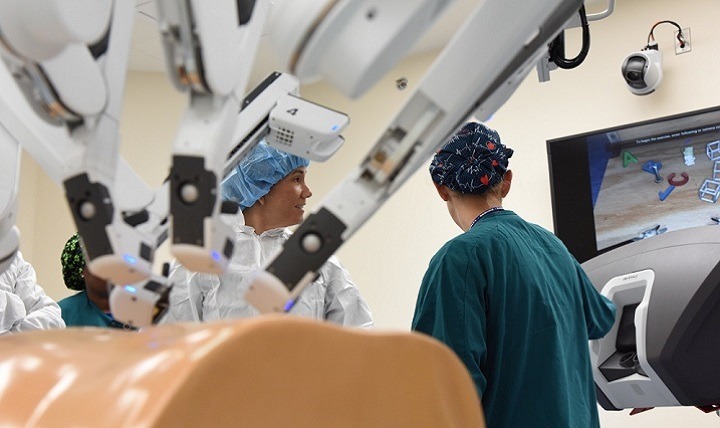 Virtual reality is being used as an intervention tool for a wide range of healthcare treatments (Credit: air force medicine)

The adoption of virtual reality (VR) for treatment is becoming increasingly common as its benefits are recognised in all fields of healthcare – from treatment for phobias to training staff for complicated surgeries.

Immersive training has particularly been observed to work for hospital staff involved in high-risk operations requiring precise skills and movements that need a lot of practice, which is more practical than watching a video, or “standing in a crowded room watching an expert”.

Dr Wendy Powell, senior IEEE member and associate professor at the department of cognitive science and AI at Tilburg University, said: “It may surprise people to learn that treating phobias using VR is one of the most established forms of medical VR interventions.

“It has been used for more then 20 years, with pioneers such as Hunter Hoffman and Brenda Wiederhold successfully treating fear of flying, fear of spiders and other phobias using VR.

“VR and augmented reality (AR) technologies are excellent for this type of treatment, as phobias are often treated using gradual exposure to the fear stimulus, and using VR allows the treatment to be adjusted precisely for the needs of each patient and can be done in the doctor’s office or even at home.”

VR is a three-dimensional, computer-generated environment which a user is able to explore, interact and become a part of.

With Parkinson’s disease currently affecting one in 500 people, and around 127,000 people in the UK, therapy for mental health and neurological disorders is one of the leading fields for VR-driven technology as interventions.

Immersive spaces such as The Blue Room where such therapy can be personalised according to the patients’ specific fears to confront phobias in a safe, controlled environment as a form of treatment, have been reported to have extraordinary benefits.

Numerous studies highlighting the benefits of VR in mental health have been published – such as a study by Professor Jeremy Parr on the effect of using VR therapy to treat phobias in autistic children, which was published in the Journal of Autism and Developmental Disorders.

He said: “For many children and their families, anxiety can rule their lives as they try to avoid the situations which can trigger their child’s fears or phobia.”

A study published in the Journal of Consulting and Clinical Psychology reports that 20 to 30% of patients drop out of standard therapy treatments.

Dr Powell said: “It makes sense that exercise is probably a lot more fun in VR than staring at a wall in a gym, but there is much more potential in VR than just a fun way to do therapy.

“For example, we’ve found that slowing down visual flow through a virtual environment can alter patient’s perception about their own movement and encourage them to move faster.

“Until recently, VR was most widely used for upper limb rehabilitation, for example in stroke patients, as full-body motion tracking systems were expensive and unwieldy.

“With the proliferation of easy-to-use consumer level tracked VR, there is rapid growth in the use of the technology to enhance treatment in a wide range of conditions, from Parkinson’s disease through to regaining the ability to walk after amputation.”

The UK-based Brain and Spinal Injury Centre set up a VR rehabilitation programme that includes patients in a video game, which forces them to use atrophied muscles – muscles that are decreasing due to lack of physical activity.

This has helped their patients develop the basic skills necessary to recover quicker from brain and spinal injuries, as well as other disorders.

VR is a tool that presents ways for people to do things better and more efficiently, including healthcare providers as it has a growing role in training applications using headsets.

Doctors in the south of the UK practice medical training using VR to improve emergency treatment for patients with Type 1 diabetes.

Up to 60 doctors will be able to use the technology to prepare for medical emergencies in at least 100 scenarios, designed by OMS.

Dr Powell added: “The reality of the current healthcare crisis is that time is money, and we never seem to have quite enough.

“Training doctors and nurses in routine procedures is time consuming, and training generally needs to be delivered by a busy (and expensive) professional.

“However, VR is increasingly being used to practice operations, visualise tumours before radiotherapy, and even teach infection control.

“Being immersed in a realistic simulation of a procedure and practicing the steps and techniques is far better training than watching a video, or even standing in a crowded room watching an expert.

“With low cost VR equipment, controllable repeatable scenarios and instant feedback, we have a powerful new teaching tool which reaches well beyond the classroom.”

How virtual reality can help children to manage painful procedures

VR has the potential to familiarise children with the operation environment in a safe, controlled and playful way, and potentially decrease their pain and anxiety.

Dr Powell explained: “When patients are immersed in VR, the pain areas of the brain are less active, and they feel less pain.

“VR analgesia is now in use in a number of hospitals in the US and also in the UK, primarily being used to help patients cope with the excruciating pain of changing dressings on severe burns.”

The variety of VR therapy opportunities makes it an effective intervention to integrate into medical treatment for children, as while immersed in an interactive game, they become distracted and are able to ignore aversive stimuli resulting in a less painful experience.

A study titled Immersive Virtual Reality for Pediatric Procedural Pain: A Randomized Clinical Trial, found all 28 children who underwent painful procedures were found to prefer an interactive VR game as a distraction.

Dr Powell said: “Researchers and games companies are increasingly turning their attention to the use of VR for managing other types of pain.

“For example, we are working with Silicon Valley-based start-up CognifiSense, and Texas-based pain expert Professor Maureen Simmonds to study the use of VR games for managing chronic long-term pain.

“VR and AR may also be able to help with phantom limb pain in amputees.

“This pain is notoriously hard to treat with conventional methods, but we’re working on a system that enables patients to control a virtual version of an amputated limb, which has the potential to help patients cope better with this debilitating pain.”

How VR will impact other fields of the medical industry

The technology has become increasingly affordable, immersive, and flexible, enabling its use in a wide range of therapy areas such as pain management, surgical training, physical rehabilitation and treatment of psychiatric disorders.

According to a new report by market research firm Innovate Insights, it is estimated the VR in healthcare market to reach $6.9bn (£5.41bn) by 2026.

It’s also now possible to convert x-rays and scans into 3D images which can be explored in VR, allowing doctors and patients to visualise medical conditions in detail and to plan treatments, including complex surgery.

Dr Powell added: “Marketers have also been quick to leverage the potential of VR, with pharmaceutical companies such as GlaxoSmithKline using it to raise awareness of medical conditions and to promote treatments.”

“VR is not a medical tool in itself, but a new medium with huge potential in the medical industry, with new developments appearing almost weekly as clinical technologists and researchers apply their creativity and knowledge in new areas.”