Prime Minister Theresa May announced a pledge of £1.4bn ($1.7bn) during the G20 Summit in Japan to help end aids, tuberculosis and malaria 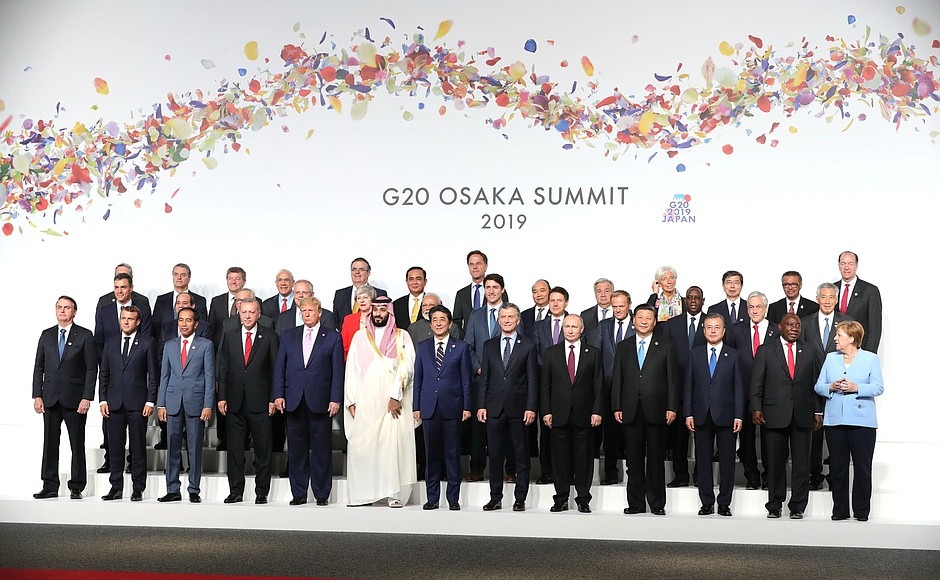 Theresa May urged international leaders of the world’s largest economies to follow the UK in providing the funding to fight AIDS, malaria and tuberculosis (Credit: en.kremlin)

Outgoing UK Prime Minister Theresa May announced £1.4bn ($1.7bn) in funding to combat the world’s three most life-threatening infectious diseases, and encouraged the international leaders present at the G20 Summit on Saturday to follow her lead.

Later this year, the Global Fund to Fight Aids, Malaria and Tuberculosis will host its three-yearly “replenishment” conference where it will ask for $14bn from donors for 2020 to 2023 – a $1.1bn increase from 2016 – to support its work over the next three years.

The UK’s contribution will average £467m ($589m) a year- a 16% increase on its last round of funding in 2016 – the fund says the money will help save 16 million lives, cut the mortality rate from HIV, TB and malaria in half and build stronger health systems.

Mrs May said: “We need urgent international action and a truly collective response if we are to tackle threats to global health security, prevent infections spreading across borders, and halt the continued spread of deadly diseases.

“I am calling on G20 countries to follow the UK’s lead in supporting the vital work of the Global Fund and its relentless efforts to tackle AIDS, malaria and tuberculosis around the world.

“Not only do these diseases cause untold suffering to those who fall ill, they hold back whole countries’ development.”

How will the UK help tackle the world’s three worst infectious diseases?

The UK’s new three-year funding pledge will help the Global Fund provide medication for more than three million people living with HIV, and provide treatment and care for over two million people suffering from tuberculosis, as well as 90 million mosquito nets to protect children and families from malaria.

Since 2002, the fund is believed to have helped save more than 27 million lives in over 100 countries and reduced the number of deaths from the three diseases by more than a third.

But aids, malaria and tuberculosis continue to claim more than four million lives a year, with a child dying from malaria every two minutes according to the World Health Organization (WHO).

Microsoft founder and philanthropist Bill Gates said the UK’s pledge was “a positive step forward in the global fight against these diseases, and will help to save millions of lives”.

He said: “Infections and deaths from diseases like aids, tuberculosis, malaria, rotavirus and pneumonia have declined more than anyone thought possible 20 years ago.

“Much of this progress is owed to the funding and health products provided by organisations like the Global Fund, which the UK helped create, and Gavi, the Vaccine Alliance.

“But the job is not yet finished, and continued progress is not guaranteed. Today’s commitment by the people of the UK via the Global Fund is a positive step forward in the global fight against these diseases, and will help to save millions of lives.”

Experts are warning that attempts at fighting against the three diseases is stalling with drawbacks such as shortfalls in funding and increasing insecticide and drug resistance, which is enabling a resurgence of the diseases, and beginning to rise after years of efforts to decline it.

Researchers from the Institute for Health Metrics and Evaluation (IHME) highlighted challenges to malaria eradication including political instability, habitat change, resistance to insecticides and antimalarial drugs, and shifting funding priorities.

An annual evaluation of global health financing produced by IHME projects a $2bn shortfall in achieving WHO’s malaria spending target for 2020, alongside minimal expected growth in development assistance for health.

International development secretary Rory Stewart said: “These diseases cross borders. Therefore our support is something that helps the poorest people in the world but is also something that keeps us safe here at home.

“We’re going to continue to invest in controlling and ultimately ending these diseases, and we will be making sure other countries contribute generously.”

The increasing in funding will help address ‘the most urgent health challenges’, says health charity

“It brings us one step closer to achieving the hugely ambitious goal set at last year’s Commonwealth Heads of Government meeting – to halve malaria in the Commonwealth by 2023 – which will prevent 350 million cases of the disease in the next five years and save 650,000 lives.

“It is vital that other global leaders also step up and commit the investment needed to ensure the Global Fund can continue its lifesaving work.

“I commend the Prime Minister for this bold announcement, which demonstrates ‘Global Britain’ at its best; a compassionate and engaged partner on the world stage committed to eliminating the world’s oldest and deadliest disease.”