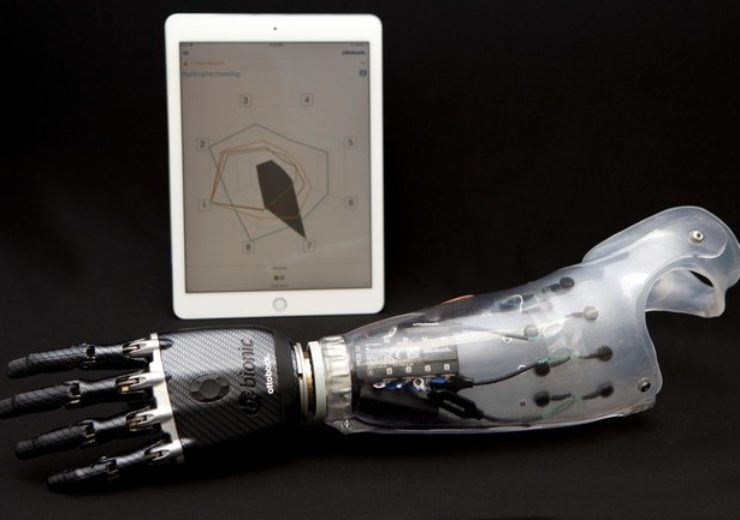 Ottobock is excited to announce its newest advancement in upper-limb prosthetics, the Myo Plus pattern recognition system. Pattern recognition represents a new paradigm in the control of a myoelectric prosthesis. On Oct. 29, 2019, Ottobock partnered with Hanger Clinic to fit the first person in North America with a transradial upper-limb amputation with the newly FDA-cleared technology.

Traditionally, individuals with transradial upper-limb amputation have been fit with myoelectric hands controlled by electromyographic (EMG) signals. The conventional transradial myoelectric prosthesis is designed with one or two electrodes that transmit the EMG signals produced by the flexor and extensor muscles in the residual limb. Some users have found these systems difficult to learn due to complex switching mechanisms required to change between the hand, wrist, or multiple grip patterns a hand may offer. In some cases, this difficulty may lead to poor adoption or even abandonment of the prosthesis.

Uniting artificial intelligence with the intuitive and innate EMG signals of the user, Myo Plus adapts to their natural movements versus requiring the user to adapt to the system. While standard myoelectric systems are limited to sensing only two muscle signals, Myo Plus employs up to 18 sensors, enabling multiple muscle signals to be captured as unique movement patterns, each individually assigned to control various functions of the prosthesis. For example, one pattern is used to open the hand, another to close it, a third pattern to rotate the wrist moving the palm of the hand up, and a fourth to rotate the wrist moving the palm of the hand down. Offering direct, convenient control of the prosthesis without any switching mechanisms required and the ability to fine-tune adjustments via an app, the Myo Plus system was designed with both the user and prosthetist in mind.

Chris Lake, L/CPO, FAAOP, an upper-limb specialist with Hanger Clinic, fit the first North American patient, Mark Kirby, with the Myo Plus system in Hurst, Texas. Lake said, “Pattern recognition offers an alternative for patients who may not be a candidate for more traditional myoelectric prostheses or do not possess the muscle capacity to operate the prosthesis in a meaningful way. To a certain extent, standard myoelectric systems require significant muscular acrobatics to fully operate a prosthesis. From an energy expenditure standpoint, pattern recognition means not burning as much physical or mental energy, thus providing the patient with prosthetic function that is more intuitive and less taxing.”

Kirby, who has used a standard two-site myoelectric prosthesis for more than 10 years said, “I loved the graphic representation of what was possible. I instantly saw how I could make the prosthetic wrist rotate versus opening and closing the prosthetic hand. It took away the mystery. Since it’s more accurate, I’m less frustrated because I’ve got less accidental movements. Before, I had to really concentrate on my finger muscles. Now I can feel them again. I’m feeling muscles I haven’t felt in years.”

The relationship between the clinician and patient was an important consideration in the design of the Myo Plus pattern recognition system. The patented Spider Plot feature, a graphic representation of muscle patterns, is one of the system’s most unique and valued features. Via the Myo Plus app, the patient and practitioner can watch live as the muscle patterns are displayed on a graph shaped like a spider web. This visual feedback was designed to make the programming process simple and interactive for both the patient and prosthetist.

“The visual nature of the Spider Plot feature in Myo Plus makes it intuitive for Mark to learn how to use the technology, as well as understand the very finite changes he’s making as he contracts his muscles. It provides an instant connection between his muscles and his phantom hand,” said Lake.