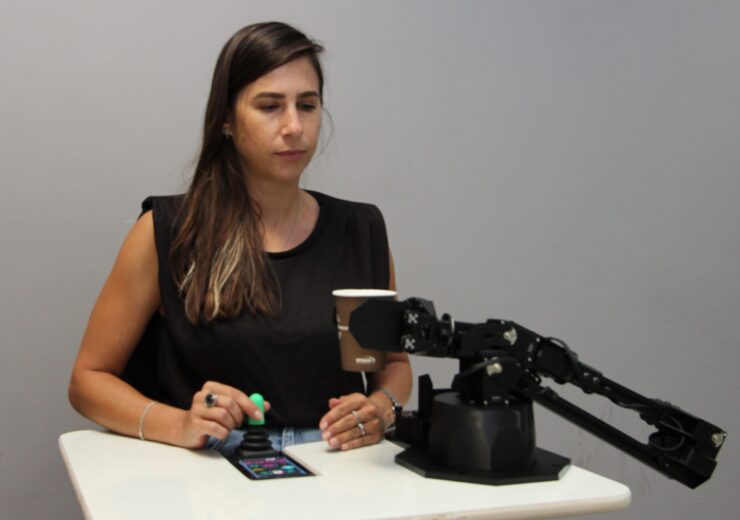 Researchers from the Open University of Israel have developed a robotic arm to aid wheelchair-bound people with everyday tasks (Credit: ALYN Hospital)

Tech firms Intel and Accenture are supporting the development of a robotic arm to help wheelchair-bound patients perform daily tasks.

The two companies have announced they will provide funding and technological expertise to an Intel Neuromorphic Research Community (INRC) project led by the Open University of Israel’s neuro-biomorphic engineering lab.

In collaboration with ALYN Hospital in Jerusalem, the project’s researchers have already created a wheelchair-mounted robotic arm, and are now attempting to build a neural network model through which patients with spinal injuries can control the device.

To this end, Intel will also supply the project with its neuromorphic technology – which attempts to mimic the functional capabilities of the human brain using AI – while Canadian firm Applied Brain Research (ABR) will offer algorithmic support.

Once the neuromorphic computing for controlling the robotic arm has been finalised, it will undergo clinical testing with children who rely on electric wheelchairs at ALYN Hospital – Israel’s most advanced adolescent rehabilitation centre.

“Through Intel and Accenture’s work with the Open University of Israel and ALYN Hospital, we hope to unlock new capabilities for mobility-impaired children, and improve the patients’ quality of life.”

Why the robotic arm is using neuromorphic Intel technology

However, according to Intel, the high asking price for many of these devices makes them essentially inaccessible to the majority of the 75 million people worldwide who require a wheelchair for mobility.

The US tech giant is hoping to change this with its Loihi neuromorphic research chip – which uses affordable parts that it claims can reduce these costs by more than 10 times, and could also enhance the functionality of the Open University of Israel’s robotic arm via real-time learning and adaptive control.

The company says this chip’s power efficiency has the potential to make these types of assistive technologies more useful in real-world situations as well, as a Loihi-based device would need to be charged up less frequently than those using general-purpose processors.

Elishai Ezra Tsur, lead project researcher at the Open University of Israel, said: “The ability of robotic arms to benefit people today is largely limited due to high cost and excessive power consumption.

“This funding from Accenture, along with additional support from Intel and ABR, is allowing us to explore the implementation of adaptive controls on neuromorphic hardware in an effort to address the need for a collaborative, user-friendly, accurate robotic arm at a significantly reduced cost.”

As well as harnessing Intel’s neuromorphic chip, the Israeli research team is attempting to build on the REACH (recurrent error-driven adaptive control hierarchy) algorithm, which was provided by ABR, in order to help users control the robotic arm effectively.

If these efforts are successful, wheelchair-bound pediatric patients from ALYN Hospital will control the device using a small joystick, as part of a clinical evaluation, while researchers collect information on the arm’s performance.

Following this, the research team also plans to explore how this assistive robotic arm can be produced for patients, while both Intel and Accenture will continue to identify, and fund, other examples of neuromorphic research that have “the potential to advance the field”.