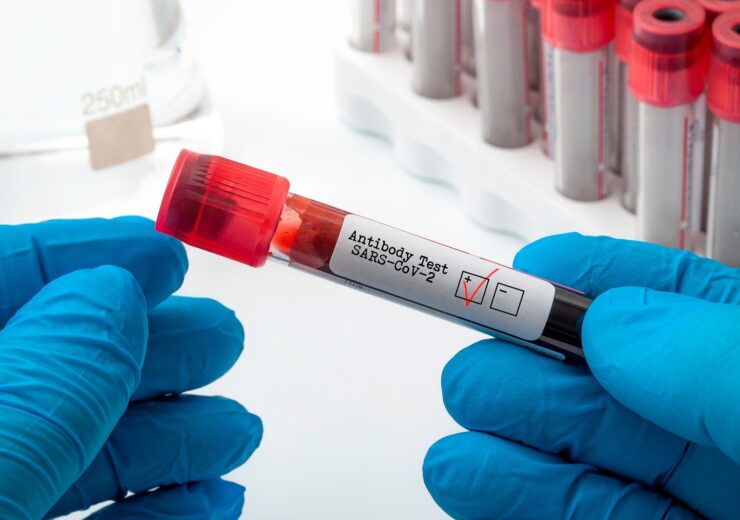 Antibody tests can be used to detect if someone has previously been infected with the SARS-CoV-2 virus (Credit: Victor Moussa/Shutterstock)

The UK government delayed findings from a study that indicated its chosen Covid-19 antibody test – the AbC-19 Rapid Test – was “significantly less accurate” than previously claimed, according to medical trade journal The BMJ.

The study, which was headed by Public Health England (PHE), suggests that about one in every five positive results produced by the AbC-19 Rapid Test is likely to be a false positive.

The BMJ has claimed that emails between PHE and the UK’s Department of Health and Social Care (DHSC) show there were plans for “minimal mention” of these findings in health minister James Bethell’s announcement that the government had bought one million AbC-19 tests for £75m ($98.9m) in early-October.

This was in spite of PHE staff warning of “significant risks” in not reporting its evaluation of the antibody test’s sensitivity – which has since been published online by The BMJ and found that, if it was deployed for widespread public use, the test’s accuracy was likely to be 84.7%.

An earlier study funded by UK firm Abingdon Health – one of the main companies producing and manufacturing the test – had claimed it was 99.4% accurate, although this figure was based on assessments conducted in a laboratory setting, rather than in the real world.

The authors of the more recent – and more damning – PHE-led study, which was published on 11 November, said: “If the AbC-19 test were to be used for mass population screening in a relatively low prevalence setting, we would anticipate a large number of false positive results – for example, 18,900 for every one million tests carried out.”

In a linked editorial published on the BMJ website, researchers from Cardiff University and Imperial College London added: “The study by Mulchandani and colleagues identifies notable limitations of the UK government’s antibody test of choice, and provides good evidence that its specificity in a real-life setting is highly unlikely to be 100%.

“Apart from limited surveillance to estimate the proportion of a population that has been infected, widespread use of this assay in any other role could risk considerable harm.”

The DHSC has since released a statement acknowledging the report from The BMJ, in which it stated that the one million purchased tests were never intended for widespread public use, and described it as “misleading and unnecessarily inflammatory” to purposefully ignore this fact.

What is the AbC-19 Rapid Test?

The AbC-19 antibody test was developed and manufactured by the UK Rapid Test Consortium (UK-RTC), which consists of Abingdon Health, BBI Group, CIGA Healthcare, and Omega Diagnostics, and was formed in April 2020 to help the UK tackle the Covid-19 pandemic.

The test uses a finger-prick device to take a blood sample from the patient, can produce results in about 20 minutes and does not need to be sent to a laboratory for analysis.

It is currently approved for use by healthcare professionals in the UK and the EU, having received a CE mark in July.

The AbC-19 Rapid Test works by detecting the presence of certain antibodies in the blood to ascertain whether or not someone has previously been infected with the SARS-CoV-2 virus.

On 6 October, James Bethell announced the UK government had purchased one million of these tests from the UK-RTC and would be using them as part of Covid-19 surveillance studies to help build a picture of how the virus had spread across the country, and further develop an understanding of how antibodies work.

At the time, Bethell said: “Home testing is a powerful tool in understanding the disease and fighting its spread, so we are thrilled by the RTC product – both for Britain and export markets around the world.”

A study published online on 1 October – which was conducted by Ulster University and funded by the UK-RTC – had concluded that the AbC-19 Rapid Test was nearly 100% accurate in detecting SARS-CoV-2 antibodies and gave no false positive results.

Abingdon Health echoed the results of this study, claiming its test was 99.4% accurate and – according to reports in UK publication The Guardian – also said “it would be inaccurate to suggest our numbers are lower than we’ve stated”.

However, The BMJ has now published what it describes as “the first independent assessment” of the test online. This assessment involved testing blood samples from nearly 3,000 key workers in England in June 2020, and was designed to determine the test’s sensitivity in the real world, rather than a laboratory.

Its findings suggest that, if the test is used “in the community”, and assuming that 10% of recipients have previously been infected with coronavirus, it’s likely that 81.7% of all positive AbC-19 test results would be incorrect.

And, while the test is able to accurately confirm 92.5% of cases already known to be positive, the study also concludes that its real-world accuracy in detecting SARS-CoV-2 falls to 84.7%.

In a recent statement, The BMJ said the UK government had been made aware of these findings prior to Bethell announcing the purchase of £75m worth of AbC-19 tests in October.

The BMJ also claimed to have seen emails sent between PHE and the DHSC regarding how this information should be handled – and, despite PHE staff warning of “significant risks” in omitting this information, the department planned to include “minimal mention” of the study in Bethell’s announcement.

A DHSC email stated that “we do need to mention it as we will get asked” and, when asked by PHE if holding back the study’s results had been agreed by ministers, the department replied: “Yes everyone is aligned as far as I know. No 10 now aligned”.

Following Bethell’s announcement on 6 October, the DHSC published a press release online that included no claims regarding the test’s accuracy – but stated “the antibody test has been evaluated by PHE and this evaluation will be published in due course”.

How have the DHSC and Abingdon Health responded?

A DHSC spokesperson has since said that the one million tests it bought from Abingdon Health were not intended for widespread public use – the function that was being assessed by PHE in its recent study.

“These tests are approved for use in surveillance studies, which is what they were purchased for,” they added.

“They were never intended for, and have never been issued for, widespread public use, and it is misleading and unnecessarily inflammatory to purposefully ignore this fact.

“This robust evaluation was carried out by PHE at the department’s request before any purchase was made, and PHE approved the test for use in surveillance studies.”

In a separate statement, Abingdon Health claimed it was “grateful” to the authors of the recently-published study, but added it had “some concerns” with the research report and modelling methodology used by The BMJ.

“Our customer, DHSC, is satisfied with the performance of the test, as is the UK-RTC, and will continue to use and roll out the use of the product,” it said.

“PHE conducted an evaluation at the DHSC’s request, prior to DHSC purchasing the product, and will continue to deploy the test for use in surveillance studies.”

The BMJ concluded its own statement on the report by saying “the findings of the BMJ study suggest that the test can deliver a sufficient degree of accuracy for surveillance studies of the population, but laboratory confirmation of positive results is likely to be needed if these tests are to be used to provide evidence of protection from the virus”.