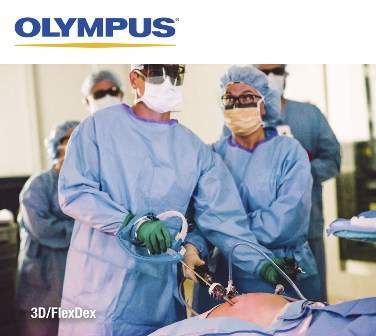 The 3D/FlexDex laparoscopic surgical solution can be used in multiple procedures, including general surgery and gynecological specialties.

Via an exclusive US distribution agreement, the company is leveraging Endoeye Flex 3D laparoscopic imaging technology with the wristed needle-driver of FlexDex to optimize the capabilities of minimal access surgery and provide the cost-effective robotic solution.

Olympus Medical Systems Group president Todd Usen said: “We expect this solution to offer surgeons the precision and control they desire without the burden of a complex and costly computer-aided robotic system.

The firm’s 3D imaging aggregated with FlexDex technology reduces the risk of suturing in difficult-to-reach areas by accurately translating the surgeon’s hand, wrist and arm movements from outside the patient into corresponding movements of an end-effector inside the patient’s body.

The 3D/FlexDex platform serves as an alternative to high-cost robotics in minimal access surgery by offering the visualization and wristed instrumentation for suturing found in robotic technology.

Various features of 3D/FlexDex include three-axis gimbal, which attaches to a surgeon’s wrist and leverages a series of mechanical components to translate the movement of the surgeon’s hand to the tip of the instrument

The 3D/FlexDex is a mechanical, low cost and disposable instrument, which offers robotic functionality with laparoscopic tactile feedback.

By maintaining optimum and correct visual orientation with up to 100º of articulation in all directions, the device allows to observe and provide therapy in the entire peritoneal cavity. It also uses high-density CCD image sensors to offer high-definition 3D images.

The company will launch the 3D/FlexDex system at the American College of Surgeons Clinical Conference, which is being held from 21 to 25 October, in Boston.

FlexDex CEO Dr James Geiger said: “Through our Olympus partnership, FlexDex is going to disrupt the paradigm where surgeons and hospitals had to choose between high cost/high function and low cost/low function.”