Taking place at the Dubai Convention and Exhibition Centre, more than 150 UK health companies will attend Arab Health 2019 to showcase their innovations 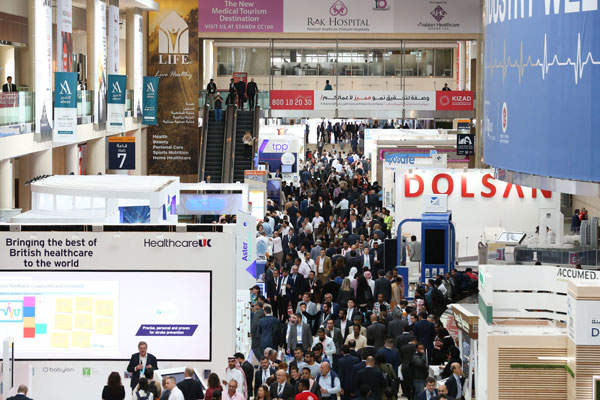 Future technologies that could transform healthcare will be showcased at the upcoming Arab Health 2019 conference.

A total of 4,150 exhibitors will display cutting-edge tech at next week’s event in Dubai, UAE.

Due to take place at the Dubai Convention and Exhibition Center from 28 – 31 January, Arab Health 2019 has been billed as the largest healthcare exhibition and congress in the Middle East.

For 44 years, the exhibition, organised by is Informa Exhibitions. has connected professionals from across the industry and brought forward the latest innovations in healthcare.

The Middle East is perceived as an important strategic region for many parts of the world in expanding digital healthcare and medical devices.

The Association of British HealthTech Industries (ABHI) trade body recently published a survey that found more than half of the UK’s health tech companies anticipate exports to the Middle East to increase over the next five years.

Here, we profile four British-made healthcare products that will be on display at Arab Health 2019.

It builds on a previous model by offering an improved interactive user interface and touchscreen that is easier for clinical staff to use.

The PAXMAN Scalp Cooling System (PSCS) – also known as the “cold cap” – is made from lightweight silicone, and features a soft and flexible cap that reduces the damage caused to hair follicles.

It will be the first time the company will debut its new version of the of the PSCS and is the third time PAXMAN has exhibited at Arab Health 2019.

This time, it is aiming to solidify relationships in the Middle East and Africa, while grow in Saudi Arabia.

Head of marketing Kathryn Daniel said: “The scalp cooling cap works by lowering scalp temperature before, during and after the administration of chemotherapy.

“Liquid coolant passes through the cap, extracting heat from the patient’s scalp – ensuring the scalp remains at an even, constant temperature to minimise hair loss.”

Hair loss is a well-known side effect of many chemotherapy regimens, with many men and women reporting it to be the most traumatic aspect of their treatment.

“Often people will refuse it because they do not want to lose their hair,” said Ms Daniel.

“Scalp cooling provides a proven alternative to hair loss, resulting in a high level of retention or even complete hair preservation, improving people’s self-confidence and creating positive attitudes towards treatment.

“PAXMAN has helped tens of thousands of people around the globe to regain some control by giving them the choice to keep their hair while undergoing chemotherapy.”

Ms Daniel said the company aims to raise the success rate of achieving “zero hair loss” for cancer patients from 50% to 80% by next year.

PAXMAN CEO Richard Paxman added: “Chemotherapy-induced hair loss is consistently ranked in the top five most distressing cancer chemotherapy side effects and we are working hard to ensure that cancer patients have a choice against hair loss.”

Co-designed with an NHS children’s hospital, Activ8rlives has been awarded a grant to take part in a clinical trial with its smart inhaler and app – with the aim of making it available to children on the NHS.

Particularly designed for children with moderate-to-severe asthma levels to avoid further asthma attacks, the Asthma+me is an app that connects through Bluetooth with the inhaler, called PUFFClicker.

Users can keep track of their asthma therapy by recording how many doses and steps are taken.

With its built-in accelerometer – an instrument for measuring the acceleration of a moving or vibrating body – the device confirms that the inhaler has been shaken properly beforehand. It also has a timer to show when to take the next dose.

The Asthma+me app can produce records on physiological data, medication adherence, and weight and growth charts for an asthma care plan.

This can be printed out for when patients visit GPs, clinics and schools, for inclusion in the child’s medical records.

Its anti-microbial technologies – called pulp and pan macerators – help hospitals and care homes all over the world to avoid dangerous infections with auto-disinfect and anti-microbial action features.

The technology prevents the growth of harmful microbes with its hands-free feature, avoiding unnecessary contact with the macerator – thus preventing the spread of harmful diseases and saving lives.

The Poole business has doubled exports to £2m after expanding into India, Singapore and other Asian countries, and aims to continue its growth by picking up new clients at Arab Health 2019.

The London Clinic claims to be the first hospital in the UK to offer a special type of surgery for above-the-knee and arm amputees.

It aims to recover the function of the limb, while reducing pain and skin-related complications.

The pioneering operation, known as osseointegration, involves anchoring the prosthesis directly into the thigh bone using an implant system called OPRA (Osseointegrated Prostheses for the Rehabilitation of Amputees).

As the prosthesis is directly connected to the bone, the surgery can improve limb function as well as patient psychology – reducing dependency, and providing the chance to return to work and resume a normal lifestyle.

Mr Paul Culpan, the consultant orthopaedic surgeon leading the surgical service at The London Clinic, said: “There’s robust clinical evidence that osseointegration, a pioneering operation for patients with amputations that removes the need for a socket prosthesis, significantly improves quality of life and long-term health.

“We are proud to be able to offer patients from across the Middle East the opportunity to undergo osseointegration by our experienced trauma surgeons in Harley Street and lead in establishing a world-class osseointegration center at The London Clinic.”

Established as a charity that reinvests its income in patient care, the Harley Street-based hospital is the first in the UK to offer this type of surgery.

The London Clinic said that military veterans who previously have had to travel to Australia or the US for treatment from seriously injuries in conflict, can now be suitable candidates for surgery in London.

The implant system for amputees, which was designed by Professor Rickard Brånemark, will be showcased at Arab Health 2019.