The medical possibilities of sustainable electrospinning

As we look at 'green' electrospinning, we investigate the potential possibilities for its medical applications. 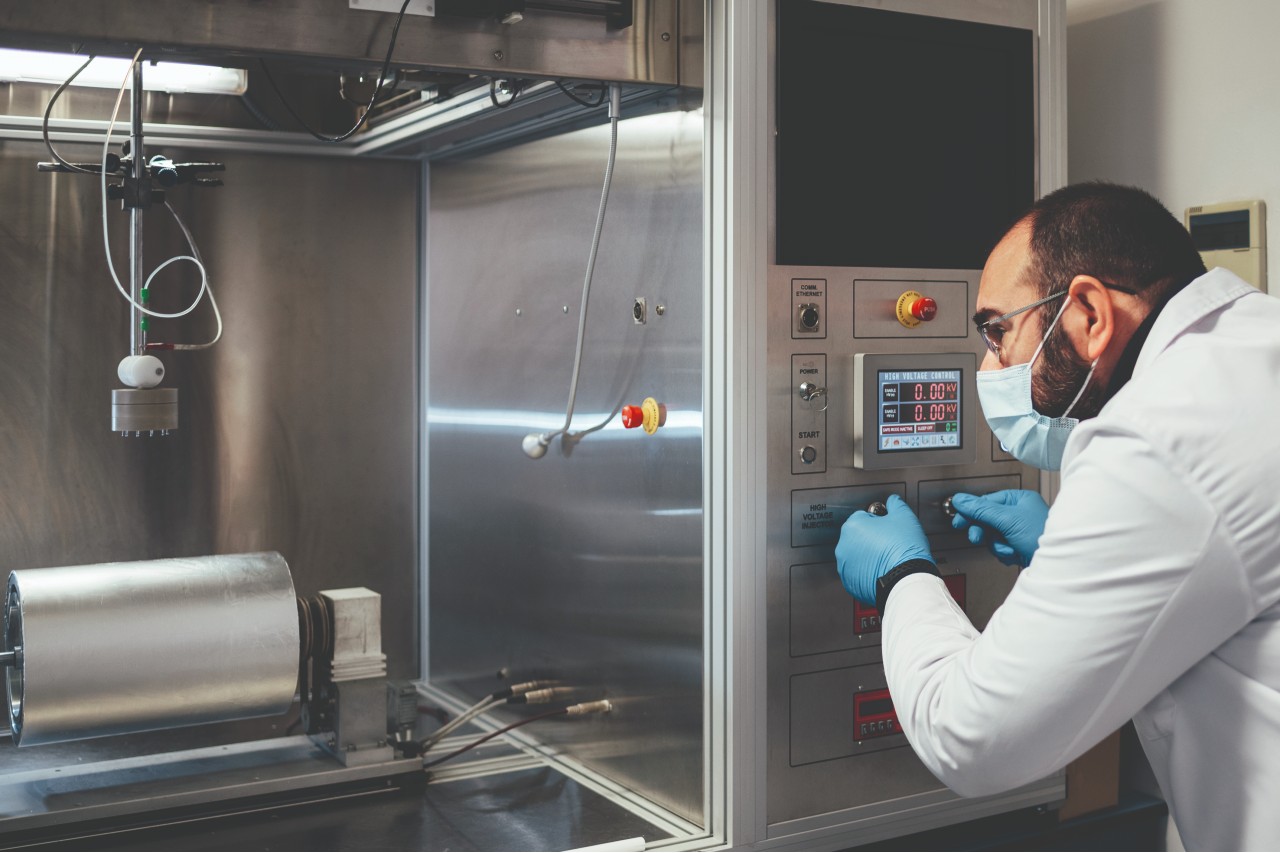 The reality of green electrospinning involves using non-toxic solvents instead of organic ones. (Credit: MAOIKO/Shutterstock.com)

As well as they work in the body, advanced biomaterials aren’t necessarily good for the planet. Despite the name, many are synthetic and require huge amounts of energy, or even environmentally hazardous processes, to manufacture. Others are extremely difficult to scale up to industrial levels. But, with the right tweaks, is it possible to go green and grow? Monica Karpinski investigates ‘green’ electrospinning with Chris Mosher of Columbia University, Tamer Uyar, associate professor of fibre science at Cornell, and Paul Dalton, head of the Dalton manufacturing and tissue engineering research lab at the University of Oregon.

Used for everything from tissue engineering to wound dressings, electrospinning is one of the most versatile and effective means of fabricating nanofibres for medical applications. Yet despite being widespread for decades, the process is seldom applied at industrial scale.

A key reason for this is its environmental impact. Electrospinning is a fluid-based technique where voltage is applied to a polymer solution that is usually made with an organic solvent.

The desired fibre is formed when the solvent evaporates – which, when organic solvents are in use, means the release of a toxic vapour. These toxins can be contained in the lab, but this isn’t always possible when manufacturing at a larger scale.

“At industrial scale, you can’t store these chemicals in large quantities because they could explode. They’re also highly carcinogenic … it’s bad for the environment and it’s bad for human health,” says Chris Mosher, the lead author of a new research paper from Columbia University that presents a ‘green’ electrospinning process, where non-toxic solvents are used in place of organic ones.

Mosher and his team investigated the efficacy of electrospinning with solvents classed as safe for use in pharmaceuticals by the FDA (class Q3C) alongside common biopolymers used in biofabrication fields. Water and other substances used as food additives, such as acetic acid, are class Q3C.

The team found a handful of green solvents that could not only be used successfully, but that produced fibres with better material properties than those made using organic solvents.

These findings are certainly promising. For industry players, they could indicate ways of working that would allow a scale-up in production; for researchers, they may work to further investigate into the sustainability and efficacy of electrospinning.

But whether this green electrospinning process could become a reality beyond the lab raises a more complex set of questions: how many in the field can apply these findings to their work, and what does it realistically take for a lab process to translate into industrial manufacturing?

Because the polymers investigated – collagen, polylactic-co-glycolic acid (PLGA), and polycaprolactone (PCL) – are commonly used in biomedicine, Mosher believes the findings are relevant to most electrospinning labs, and that they could inform workflows across the wider medical device industry.

“I think that almost every lab that does electrospinning uses one of these three polymers … but there’s others within that chemical family that we think this will also apply to,” he says. “Moving forward, the idea for the industry is just to adapt to these Q3C solvents.”

While many of the Q3C solvents didn’t work with the polymers, there was a handful that did – with acetic acid coming out on top as the most effective. As well as having a low ecological impact, acetic acid can be used for electrospinning under routine fabrication conditions.

Helpfully, the paper also includes information on all the parameters used when each polymer was electrospun with each solvent, which Mosher hopes that everyone in the field will use as a blueprint to inform their own work.

Researchers could look through the FDA tables and try out a greener solvent, and manufacturers could use the system as a baseline method and add any necessary tweaks. “For someone who has electrospinning experience, this isn’t decades of work,” says Mosher. “You could figure this out in a few runs of electrospinning.”

However, green solvents won’t always be an option as many polymers simply won’t dissolve in them. “In most cases, most materials are soluble in organic solvent, not in water or an environmentally-friendly solvent,” says associate professor of fibre science at Cornell University Dr Tamer Uyar, who is also the editor of the journal Electrospinning. “That’s the chemistry – you cannot avoid it.”

However, he believes a helpful future direction for research might be to identify new materials that could be used with green solvents. These could be obtained from nature, as has been seen in electrospun PET bottles formed using plant-based reactants, rather than those from oil sources or petrol.

From lab to industry

Translating a lab finding into industrial use is often a journey fraught with practical, commercial, and regulatory challenges. Even if a manufacturer did want to use Mosher’s paper as a blueprint for altering their work, any material changes to a medical device may require approval – which can come with a new set of costs.

If there is a change in the materials used to create the device, which would include a change in solvents used during the electrospinning process, the FDA may require a risk assessment of any new or increased biocompatibility concerns.

For any changes that may impact a device’s safety and effectiveness, the FDA requires that manufacturers submit a premarket notification (501k). The standard fee for doing so is currently $12,432.

“As soon as you introduce a new solvent into the system, even if it’s a green solvent, this is a compound that the FDA needs to look at,” says Paul Dalton associate professor and head of the Dalton manufacturing and tissue engineering research lab at the University of Oregon.

Going through these processes can be a drain on resources, he adds, particularly as the FDA needs to understand what happens through the full life cycle of a solvent. “The dollar costs start creeping in, and I think that’s why there’s fewer medical products from solution electrospinning,” he continues. “There’s a big appreciation that this is an issue within the biomaterials community.”

Then come the practical difficulties with translating a lab process into a large-scale manufacturing one. As well as safety concerns around toxic vapour production, small-scale processes must be replicated in ways that allow for mass production. Lab work is a long way from industrial production, so workflows aren’t necessarily designed to be both efficient and commercially viable.

Mosher says his team have been approached by some manufacturers looking to make their work greener, but that they weren’t able to mimic the lab process within their own operations. While the team hopes that the information within their paper is enough for some companies to work with to develop their own processes, they are currently considering other routes for getting green electrospinning into the industry.

Research labs can apply to patent their findings and licence out their processes and technology to companies, or even found their own start-up to bring them to market. Mosher says either could be an option for his team, but ideally, it will be new companies who take up the green electrospinning process and manage to make it work at scale.

Sometimes, a company may approach a lab and work with them to commercialise their findings – but this doesn’t happen very often, says Uyar. Even if a finding is scientifically and sustainably sound, it must be viable as a product to attract corporate investment interest.

The future of sustainable electrospinning

Swapping organic for green solvents would certainly be a significant step forward, but improving the sustainability of the field is a broader and ongoing discussion. To get a truer sense of the environmental impact of electrospinning, we should look to the entire life cycle of the products we produce using this method, says Dalton.

For example: one may be using a green solvent, but how much of it is required to produce the end product? How was the solvent made, and how much energy was used throughout the end-to-end production process?

This also includes weighing up the benefits of other, newer forms of electrospinning that don’t use solutions at all, such as melt electrospinning and melt electrowriting – a process invented by Dalton Lab – which uses heat to liquefy the polymer before cooling it into a solid fibre.

While these processes don’t use a solution, they do require energy to generate heat. There is yet to be a direct comparison of which is more sustainable, says Dalton.

Still, there is much to be optimistic about. Sometimes, change must happen incrementally – which can be especially true when dealing with commercial and regulatory constraints.

“In the industry, we are still using organic solvents and petroleum-based materials every day,” says Uyar. “So [Mosher’s] paper, and others like it, are promising. In five years, we will be using more green solvents and more biomaterials or more materials coming from nature.”

If more electrospinning companies can use greener processes at scale, it could revolutionise the medical device industry and tissue engineering field, says Mosher. “Biofabrication is really a part of the fourth industrial revolution, with cells sitting on these fibres, laying down a matrix and regenerating tissue. It’s really blending the physical and biological world.”