Predictions that microfluidics would take over the world have yet to be realised, but the likes of the coronavirus crisis could see its potential fulfilled 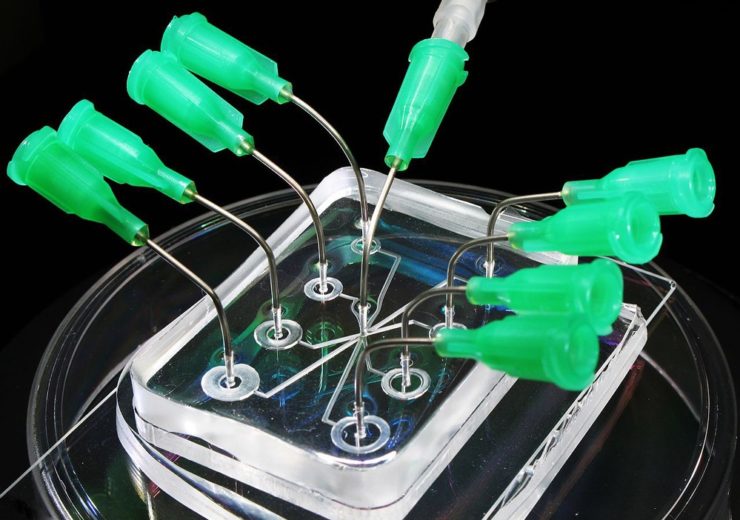 There were many predictions that microfluidics would take over the world but it has been relatively slow to develop (Credit: National Institute of Standards and Technology / Wikimedia)

With a Covid-19 vaccine and treatments many months away, medical consensus accepts widescale testing and efficient isolation is currently the best form of defence to curb coronavirus infection rates and protect global healthcare facilities from becoming overwhelmed. Microfluidics is one such technology that could provide fast, affordable diagnostic tools for point-of-care testing. Jim Banks speaks to Bruce K Gale, director of the Utah State Center of Excellence for Biomedical Microfluidics about the benefits and costs of the technology.

Beyond the medical devices field, the science of microfluidics is not widely known, but there is a chance that could change as it starts to deliver potential applications for the likes of near-instant point-of-care testing for coronavirus infections.

The concept of lab-on-a-chip (LOC) technology is immediately compelling, as is its potential for chemical analysis, medical diagnostics, high-throughput screening and more. But decades after its inception, the market has not reached tipping point.

Development of the technology has been quite rapid, but its adoption for biological research has not kept pace. This is largely because the fabrication of these intricate devices is challenging. In fact, the fabrication process was described by a research team in Singapore in 2015 as ‘tedious’, and there has since been little to challenge the traditional methods that put scalable production at an acceptable price just beyond reach.

As microfluidic devices deal with the precise control and manipulation of fluids constrained at a submillimetre scale, which allows capillary action to govern their movement, great precision is needed to create the necessary channels and other features of a chip. The LOC concept also integrates many laboratory functions on a single, tiny integrated circuit that handle fluid volumes, sometimes less than picolitres, and may involve filters or valves of other components, which hugely increases their complexity.

“There were many predictions that microfluidics would take over the world, but it has been relatively slow to develop,” remarks Bruce K Gale, director of the Utah State Centre of Excellence for Biomedical Microfluidics and an associate professor of Mechanical Engineering. “Now, however, it has matured to the point where we can do a great many things with it, and it is having a substantial impact.”

“The biggest issue is that, although microfluidics has a number of applications, many are in areas where the numbers for mass production only kind of make sense,” Gale says. “If, for example, you need 100,000–500,000 tests per year, then that is too few for very inexpensive injection moulding. When you need less than 100,000, mass-production processes become very challenging.”

Much LOC fabrication began with photolithography, following in the footsteps of semiconductor fabrication, but the need for more customised features, compatibility with chemical and biological components, and lower costs, have led to many other processes becoming involved. Among them are etching, deposition and bonding, injection moulding, polydimethylsiloxane (PDMS) processing and embossing. In fabricating PDMS microfluidic devices, embedded scaffold-removing open technology has brought costs down, allowing the creation of microfluidic channels using a dissolvable scaffold. However, nothing has proved to be a silver bullet.

“In medical diagnosis – one of the biggest areas in which microfluidics is used – the chips almost become custom devices,” Gale explains. “They are unlike integrated circuits or computer chips that do many things. These devices do just one thing, which means slightly different chemistry is needed. Customisation and competition from existing sources are the main problems. The price of microfluidics is not competitive in some areas yet.”

The number of successful applications of microfluidics is growing, though Gale is quick to point out that not all are visible. “There are some drug discovery platforms, including one that has sold more than one billion chips, but we don’t see them as they’re used in background research,” says Gale. “Others are almost microfluidics. BioFire, for example, has a technology that can detect 20 respiratory pathogens, but it’s more millifluidics than microfluidics, although it does show the opportunity for this kind of technology.”

It’s clear the market is on an upward trajectory with many companies currently enjoying success. One example, GeneXpert system, automates sample preparation, performing all the complex steps of DNA extraction in its microfluidic cartridges and is approved for disease detection in low resource settings.

Over time, it is likely that traditional tests will be replaced by microfluidics. Although there is clearly huge potential, there are also tedious aspects. “If you are using injection moulding techniques then you need a lid to create the channels,” says Gale. “You have to make at least two pieces and if you are making more complex devices with valves or pumps, then you may need three, four, five or six layers, which then need to be put together. The most successful chips minimise the number of valves and complex parts.”

Even a small plastic device can involve a lot of processes. “If you are doing any chemistry or biology in the device then you need to put reagents into the chip, or maybe a special component like a filter, or maybe you need to do some surface chemistry.” says Gale. “All of that will need additional manufacturing.”

Often overlooked is the packaging or interfacing of the chip. Adding in all the connections a chip requires could quickly multiply its cost by a factor of 10.

The promise of 3D printing

In every area of the fabrication process, research is being done in earnest to bring down costs while improving scalability and quality.

“There is a lot of research going into injection moulding or hot embossing, and for chips that need a high volume of production there are some good techniques out there,” says Gale. “Some groups have sped up the assembly and interfacing requirements. Then there is 3D printing, which will help microfluidics to prosper, as it enables customisation and is quickly scalable. You can quickly scale up from hundreds of chips to hundreds of thousands.”

Steven Soper and his group at the University of Kansas have done a lot of work on injection moulding, making great strides in mass-produced channels. Soper’s work includes using microfluidic platforms for the efficient isolation and molecular profiling of circulating tumour cells, cell-free DNA and nanovesicles, using devices that are made using injection moulding from thermoplastics to enable mass production at low cost.

A team from the University of Washington, led by Albert Folch, has developed new techniques for a PDMS device based on 3D printing, a new type of rubber polymer. The technique promises great savings of time and effort and, back in 2016 when he released his initial report on advances in the stereolithographic 3D printing of biocompatible, inert and transparent PDMS, the potential to change medical device manufacturing for good is already clear.

Fabrication must keep pace with application

Just as fabrication techniques push forward, so do the potential applications of microfluidics. Now, the focus is on organ-on-a-chip (OOC) technology, also known as human-on-a-chip or mouse-on-a-chip.

This requires a multi-channel 3D microfluidic cell culture chip that simulates the mechanics, processes and physiological responses of entire organs or even whole organ systems – a type of artificial organ.

Many research groups are now looking at OOC technology, which represents a new era of complexity for LOC and μTAS systems. The demands on fabrication processes will inevitably become greater.

“This involves complex and, therefore, slow chip manufacturing,” Gale observes. “There are lots of applications out there. Here in Utah, we talk to doctors and dive into solving their problems. When you go to conferences, most people are talking about specific applications and that is what determines the fabrication techniques that are needed.”

Being able to have a generic fabrication platform that could be customised would make a huge difference. This is where 3D printing can offer huge value.

Whether such a platform will be available in the near future remains to be seen. However, one thing is certain, the desire to build it – thereby allowing microfluidics to fulfil its potential – is already there.