Synthetic plastics were a revolutionary invention in the field of medical devices, and with so many applications now, they're a vital component of healthcare 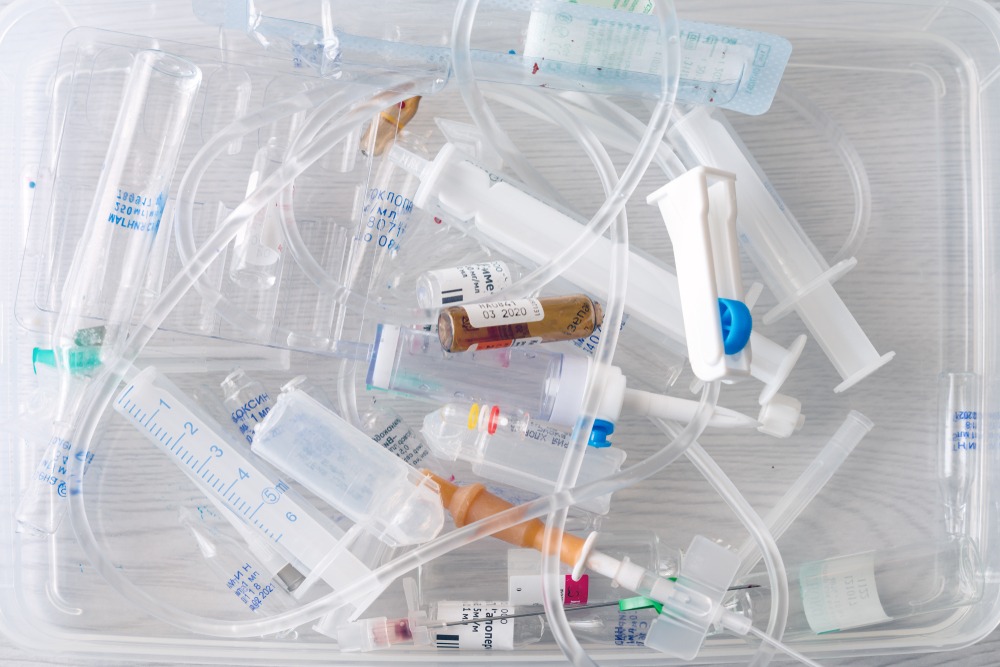 Plastics play a vital role in many areas of healthcare (Credit: Shutterstock/EleniyaChe)

There was a time when medical devices were comprised of glass, ceramics or metals – but the invention and subsequent commercialisation of plastics transformed the industry.

While natural polymers are found throughout the world, the first synthetic plastic was invented by Belgian-born American Leo Baekeland in 1907, and it’s this breakthrough that set the stage for a healthcare revolution.

Baekeland combined phenol – a compound found in coal tar – with formaldehyde under a high pressure and heat environment to make his namesake Bakelite plastic.

It wasn’t until the 1960s, after many subsequent advances in plastic engineering, that single-use plastics began to enter hospitals as an alternative to prior materials that carried the risk of cross-contamination upon reuse.

Nowadays, single-use plastics are under attack for bulking up landfills with non-recyclable waste that doesn’t degrade for hundreds of years – although some medical devices do use biodegradable materials.

But although the reduction of plastic waste is a noble cause to support – hospitals are left in a bind because of the life-saving instruments that rely on a polymer-based construction.

Here, we take a look at four reasons the medical device industry couldn’t live without plastics.

The invention of the flexible urinary catheter is attributed to US founding father Benjamin Franklin, and at the time he made the curved implement out of silver.

But since then, materials spanning other metals, rubbers and finally plastics have been used, until it was established that a polymer-based construction had the most benefits.

Nowadays, those rubber tubes aren’t just used to drain urine from the body, as the versatile nature of plastic components has spawned devices that can travel through the venous system to various parts of the body to diagnose or treat disease.

One example is cardiac catheterisation, in which a thin plastic tube is guided by X-ray all the way to the heart, where a dye is injected to highlight specific areas depending on which type of disease is suspected.

If a patient is at risk of heart disease due to plaque narrowing the arteries, the procedure can be combined with balloon angioplasty to widen them by adding a component to the device.

The term drug delivery may prompt thoughts of syringes, injectors and inhalers, and all of those devices have certainly benefited from the polymer revolution in healthcare – but plastics have a far more impressive résumé in the field.

Before 1950, all drugs were taken via pills or capsules that released their payload immediately upon contact with water.

But as experimentation with different polymers ramped up around this time, so too did the study of plastic materials as the core of implanted drug delivery systems (DDS).

Now, different pharmaceuticals can be carried by polymer-based DDS engineered to survive the environments in different areas of the body.

They can then dose patients using a variety of delivery mechanisms that keep the treatment consistently below the maximum desired level and the minimum effective level – a scale known as the therapeutic index.

The latest push in the field of drug delivery involves engineering medical devices made of plastics or select metals to achieve a highly biocompatible drug delivery system that can deposit therapeutic agents according to reactions inside the body, although this research is in its infancy.

One of the most common ways to manufacture either whole medical devices or the components for those of a complex working nature is injection moulding.

The technique involves injecting a hot liquid substance made of a chosen material into a mould and allowing it to set into that shape as it cools.

The reason plastics are so vital in this process is the characteristics of a plastic, like the density and temperature tolerance, can be purpose designed and produced much quicker and cheaper than their metal counterparts.

A good example to illustrate this point is artificial joints, which were once made from metal due to the material’s strength, but are now frequently made from certain polymers due to their superior biocompatibility, high impact strength and non-toxicity.

One major challenge when creating implanted medical devices is ensuring that the final product is biocompatible – meaning it won’t cause toxicity to a patient if it degrades or corrodes over time.

The complex environments inside the human body can be extremely harsh, and implants made of metal are at risk of failing – albeit at a very low rate of incidence – before they need to be replaced due to wear and tear.

This is mostly applicable to artificial joints – an area in which plastics are being evaluated in research as an alternative to metal – but also to other devices, like pacemakers, where longevity of operation is of paramount concern.

It’s not just the solid construction of medical devices that plastics lend themselves to readily either, as some pieces of equipment made of metal are coated with a polymer layer to enhance their biocompatibility.

As an example, in cases of severe coronary heart disease, a stent made using a metallic scaffold coated with a polymer matrix can be place within a coronary artery to allow blood to flow to and from the heart.

WaveBlock introduces new technology to protect yourself from EMF Radiation