We look at combining 3D printing with advanced materials, and what this might mean for surgical practice and medical devices. 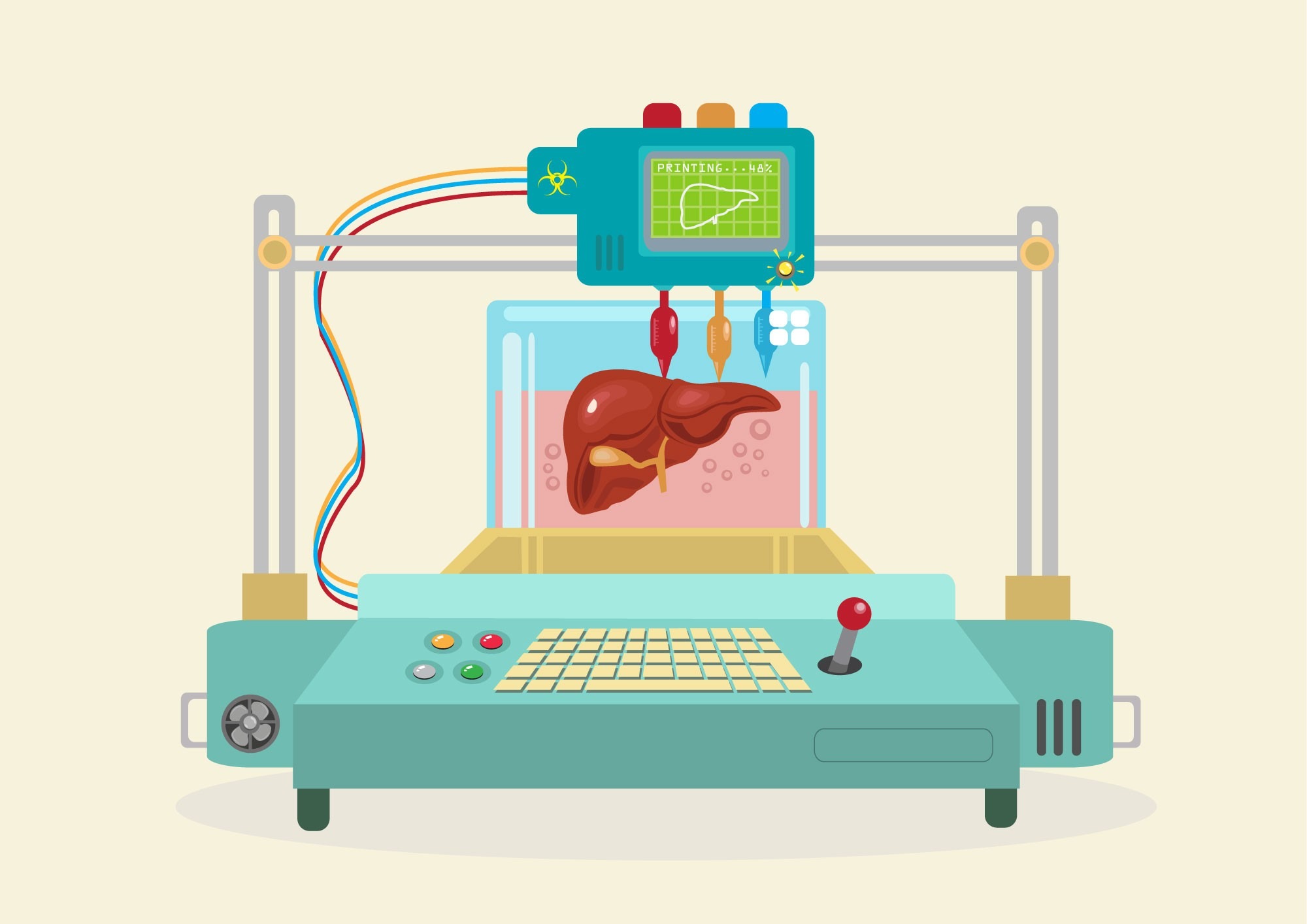 A method has been developed to 3D print lifelike patient-specific liver models, which can be used to simulate procedures. (Credit: Crystal Eye Studio/Shutterstock.com)

Standard 3D printers can’t extrude the tissue-mimicking materials needed to make lifelike models of human organs. But who said 3D printing had to be standard? Tim Gunn speaks to Richard Arm, flexural composites research fellow at Nottingham Trent University, and Mike McAlpine, associate professor of mechanical engineering at the University of Minnesota, about their novel approaches to combining 3D printing with advanced materials, and what they might mean for surgical practice and medical device design.

Most professionals can frame their mistakes as learning opportunities and continue to sleep at night. Surgeons have to look for other perks. Just as patients going in for operations do their best not to think about the fallibility of the people that will be performing them, surgeons – trained, paid and feted for saving and improving lives – often struggle to accept that they can make, and perhaps have made, mistakes that harm and kill.

Confusion over the rate of medical errors only testifies to their difficulties. In the mid-2000s, the UK’s National Audit Office estimated that patient safety incidents caused somewhere between 840 and 34,000 deaths each year. As per a BMJ paper from 2016, it’s commonly said that medical error is currently the third-leading cause of death in the US, claiming more than 250,000 lives each year.

More recent and less popular analyses put the number of US deaths directly caused by preventable mistakes at less than 10,000. How, statisticians wonder, do you calculate something nobody wants to count?

Of course, knowing that a surgeon could recite the precise number of deaths caused by mistakes in similar operations over the past year would hardly fill patients with confidence, either. Surgeons run on self-belief. Fixating on what could go wrong when they cut another living person open would make their jobs altogether impossible.

At the same time, all the education in the world won’t make anyone perfect, and there aren’t many ways to practice – to safely make productive mistakes – for a specific operation on a specific patient. Surgical teams can and do speak with patients, read medical histories and plan operations with the help of radiologists and an array of scans, but there’s a certain something missing from even the best 2D image or virtual 3D projection.

“Surgery is a tactile thing,” explains Richard Arm, Flexural Composites Research Fellow at Nottingham Trent University. “When a surgeon looks at a scan, he’s not seeing the same thing the radiologist sees. He knows what he’s looking at in terms of the anatomy, of course, but he’s more familiar with it in three dimensions, covered in blood and lots of colour.

“On the scan, it’s very clinical – it’s black and white. You can pick out the tissues and see, for instance, where a tumour is, but actually understanding how that tumour interacts with the surrounding soft tissue is something only a surgeon can really know – and only through being able to feel it. He can feel how the tumour is embodied by the organ, how much he needs to cut out, and where he needs to make his incision.” Throughout the history of surgery, that knowledge has only become available in the operating theatre.

Helpfully, then, Arm and medical textiles expert Arash Moghaddassian Shahidi have developed a method for 3D printing scan data into startlingly lifelike patient-specific liver models, which surgeons can use to simulate procedures.

The extra practice means they can save as much blood and healthy liver tissue as possible when it comes to the live operation, which they might also be able to perform faster. At minimum, this should translate to shorter recovery times and lower the risk of infection, but in abnormal cases, it can be the difference between life and death.

“It’s about improving outcomes for patients,” Arm explains. “You can try surgeries where the surgeon would previously have looked at the scan and thought, ‘No, we can’t do that’. It just opens up more options, more possibilities and greater survival rates for more people.

Perhaps most importantly, unlike other mooted life-saving applications for 3D printing, these organ models are ready for use today. In fact, replicating human tissue to help train and prepare surgeons might be the closest thing Mike McAlpine, associate professor of mechanical engineering at the University of Minnesota, has found to a ‘killer app’ for 3D printing.

Since 2018, when McAlpine’s team published a paper on the topic, visitors to his lab have been able to palpate anatomically exact models of the prostates of three former University of Minnesota Hospital patients. Moreover, anyone squeezing one of these models can do so in the knowledge that it was tuned to specifically match the mechanical properties of its original, each of which was whisked off to a testing lab straight after it was surgically removed.

“It’s not just a random ‘general human’,” McAlpine stresses. “These were actually three humans with three different prostates. We performed the mechanical tests on their prostate tissue samples and we then tuned our silicone inks to match. That’s the level of resolution that you can get.”

Those prostates also incorporate sensors that record the force with which they interact with surgery tools, enabling surgeons to “fine-tune their limit space” and determine how to perform a procedure without causing a bleed.

“It not only provides a platform for surgical rehearsal, because you have a soft model that you can suture into now, but also a feedback mechanism so that the practice surgery actually gives you quantitative feedback on how you’re performing”, McAlpine says. “It’s like a game of Operation – the sensors respond to the feedback.”

More recently, the team worked with Medtronic to produce patient-specific aortic root models with embedded sensor arrays that can be used by surgeons and medical device manufacturers to both determine the optimum dimensions for a transcatheter aortic valve replacement and practice inserting it correctly.

“As a medical device, this resonates with people because you don’t have to ask them to imagine printing it on to their wrist or whatever in 20 years’ time,” says McAlpine. “It’s a low-hanging fruit for 3D printing. It’s not implantable, so you don’t have to worry about getting all the approvals, and we’re not trying to print biological material, so we don’t have to keep cells alive. It’s an aid that can be printed pretty much on the fly now for anyone to use. That’s the advantage. This is something that you can put right in the hands of doctors now.”

McAlpine’s next goal is to trial some of his team’s models in a large-scale patient study and see precisely how they impact outcomes, but their relevance to surgical practice is already clear.

Just recalling the first time one of his team’s liver models was put in front of a surgeon, Arm’s voice speeds into the hushed, excited tone that one might take when watching an actual procedure.

“As he started cutting away and revealing the tumour, he realised that it was invading one of the blood vessels, which was obviously filled with blood, and when he started to try and remove it, it started to seep, so immediately he said, ‘Right, we need to clamp that’,” Arm recalls.

“He was able to see something he wouldn’t have otherwise, and then respond accordingly, and then to plan his surgery slightly differently to what he originally intended. Even if a surgeon doesn’t complete the [simulated] procedure, they know and understand what’s actually happening with the liver, so when they go into theatre, they’re much more prepared to deal with any problem scenarios that might arise.”

The Nottingham and Minnesota teams use 3D printing very differently, which is a testament to Arm and McAlpine’s shared belief that the technology is secondary to the way it is employed.

By making a mould of an organ 3D printed in a more traditional thermoplastic and casting it in other materials, the Nottingham research group have sidestepped the difficulties of adapting commercially available products to print tissue-mimicking materials.

“It’s very much about manipulating the prints using these post-print processing techniques of casting and coating, and extrusion and moulding,” says Arm. “Materials are applied in different ways depending on what we want to achieve. With these livers, we also recreate the vasculature and the tumour, and embed it all in the right place.

“If you think about it, you’ve got three different materials there straight away, that all have to work together and all have to be made almost at the same time. Then the blood vessels need to be open to be filled with blood and to hold it at the right pressure. The first one was probably one of the hardest things I’ve ever made, in terms of its technical difficulty.”

By contrast, the Minnesota team directly prints specific mixes of different types of greases, silicones and colourings – which isn’t much easier, as McAlpine explains. Quite apart from mimicking the properties of biological tissue, these inks need to cure fast enough to solidify into the desired structures and slowly enough not to clog the print nozzle.

The strategic use of chemical agents inside the silicone makes that possible, ensuring that enough polymer chains link together at room temperature to solidify the ink into the desired shape – although, as with the Nottingham liver, a separate supporting material is needed in the meantime.

As such, McAlpine’s aortic root models are made with four specifically tuned and simultaneously printed inks: three of which mimic the aorta and one that holds them in place as they cure.

In Arm’s terms, printing and processing these organ models is a way of translating between the generic descriptions in clinical literature, the visual language of radiologists and the tactile understanding of surgeons.

Both research groups start by aligning their materials with the results of published tests on the mechanical properties of tissue and blood vessels. From there, they employ scan data and radiological insights to recreate patient-specific attributes, like calcification geometries on aortic valves, or fibrosis in the liver, which stiffens the tissue and makes it appear lighter in scans.

McAlpine and Arm both started their work on 3D printing tissue-mimicking materials because of requests from medical practitioners and throughout the development process, each relied on the expertise of radiologists and surgeons, alongside polymer experts and mechanical engineers.

For his part, Arm prefers to call the Nottingham livers multidisciplinary products over 3D printed ones. Most importantly, though, they reached their final iterations by learning from their mistakes.

“The first one took us probably two months to recreate,” says Arm. “The next one took about two weeks, and the third one took two days. We learned from just making and failing, and then making again – learning from the mistakes and recreating things with different steps and different materials.

I think we’re all our own best teachers – anybody who has any sort of wisdom about themselves has learned from their mistakes, and not only is that teaching yourself, but it’s teaching yourself in the way that you know how to learn. It leads to such individuality and such growth.” Surgeons are too important not to be able to do it too.