We look at the latest research on coatings and how they maintain the balance in biocompatibility, mechanical function and medical outcome in the design of implants for the human body. 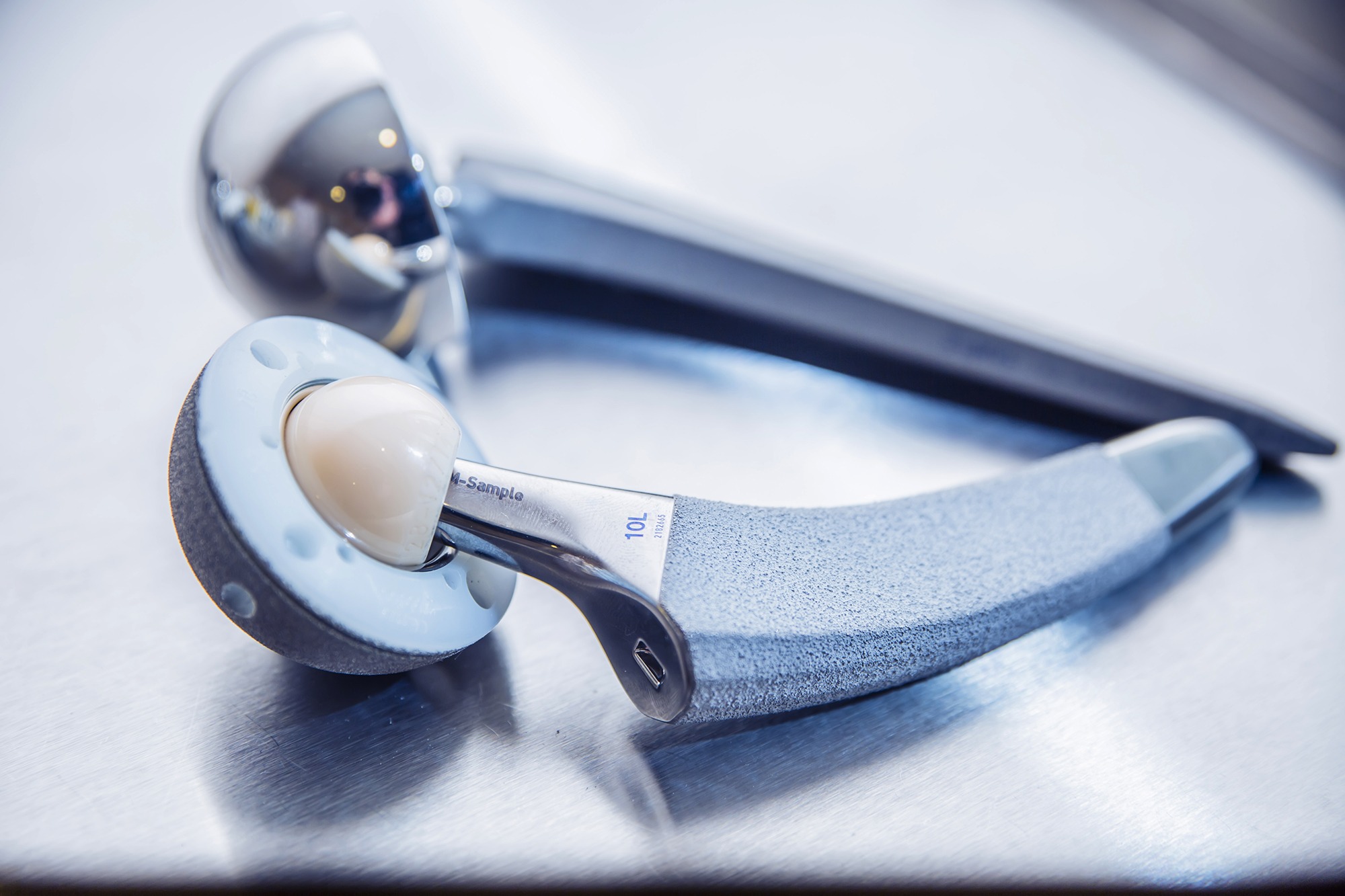 There are many challenges the medical device coatings industry faces, but the research looks promising. (Credit: Denis Simonov/Shutterstock.com)

Designing an implant for the human body is a complex balancing act between biocompatibility, mechanical function and medical outcome. Whether titanium or silicone, a device put to work in the human body must retain its integrity in a hostile environment and avoid any risk of toxicity. Coatings help maintain this balance, and Jim Banks speaks to Caitlin Howell, assistant professor of biomedical engineering at the University of Maine, and Ana Lidia Flores-Mireles, Hawk Family assistant professor of the Department of Biological Sciences at the University of Notre Dame, about some of the latest research in the field.

Implanted medical devices, from tiny stents to bulky hip replacements, have become a mainstay of modern medical care. The use of implants does not, however, come without complications.

The human body is not kind to invaders and does not necessarily recognise the difference between a life-saving medical device and a dangerous virus or bacteria. Improving biocompatibility is among the greatest challenges in the medical implant industry, and right now, advanced coatings appear to be the best option for success.

Coatings are bringing new hope to patients who, though using the most common medical devices, experience unwanted and potentially harmful complications. For instance, urinary catheterisation is one of the most common health care-related procedures, but among the urinary tract infections (UTIs) acquired in the hospital, some 75% are associated with a catheter.

Typically, treatment involves the use of antibiotics, but because infections are only observed once a catheter is removed, patients can suffer from pain and discomfort beforehand, as well as having an increased risk of sepsis and endocarditis. It is estimated that over 13,000 deaths each year are related to healthcare-associated UTIs. Couple this with the increasing prevalence of antibiotic-resistant microbial strains, and it’s clear an alternative is greatly needed.

“The problem is already big, but it is growing,” says Caitlin Howell, assistant professor of biomedical engineering at the University of Maine. “Antibiotics work well, but the emergence of antibiotic-resistant organisms means that we constantly need different or stronger treatments to kill the infection. This may be a slow-moving problem, but it is a very serious one.”

“Often, there are multiple microbes, so when you kill one you are just making room for others,” she adds. “As the population ages, more people need long-term catheterisation, and it is not practical to change the catheter every day. If you have a catheter for 30 days, the probability of infection is 100%, so it is clear that we need new solutions.”

Fortunately, Howell, who did her post-doctorate training in bio-inspired materials, recently attended a conference hosted by the US National Institutes of Health (NIH) to connect researchers who could generate ideas to combat catheter-associated urinary tract infections (CAUTI). There she met Ana Lidia Flores-Mireles, Hawk Family assistant professor of the Department of Biological Sciences at the University of Notre Dame, and the door to innovation opened.

“These infections are very common and come with a terrible cost in terms of damage to patients and their families,” Howell observes. “I met Ana, who is an up-and-coming leader in CAUTI and who had done some work on proteins that adhere to catheters and create the environment for bacteria to grow. The bio-inspired coatings I had worked on were great with proteins, and my ability to make such materials complemented Ana’s understanding of proteins perfectly.”

Howell’s post-doctorate studies at Harvard saw her work on the concept of liquid coatings to repel contaminants such as oil. But she extended the range of contaminants to encompass the microbes that take root on the wet surfaces inside the body. Working with Flores-Mireles, she devised a novel liquid surface coating for human catheters, which can help reduce the protein deposition that leads to infections of the urinary tract and bloodstream.

“I try to understand the mechanistic interaction between pathogens and their host,” explains Flores-Mireles. “I asked why the infection rate with catheters was so high, but clinical studies don’t give a mechanistic perspective. Also, I had seen different pathogens – Escherichia coli, Candida and many others – that don’t cause infections if there is no catheter and no biofilm.

“So, we had to look at what is different about catheters that allows the build-up of pathogens and why existing anti-microbial coatings were not preventing infections when they don’t normally grow in human urine,” she adds. “Biofilms don’t work in that environment, so something in the patient is making the pathogens when a catheter goes into the bladder.”

The surface of the bladder, which is small but flexible, can be easily scratched by a catheter, as a rigid new pair of shoes can cause blisters on your feet. Constant irritation causes the protein Fibrinogen, a clotting factor, to be released in high volumes. These proteins coat the catheter, rendering the anti-microbial film ineffective because it is no longer coming into contact with the pathogens.

Helpfully, around the time the two started working together, Howell had become aware of the work Harvard University’s Wyss Institute was doing on Slippery Liquid-Infused Porous Surface (SLIPS) technology, which creates omniphobic, slippery surfaces by infiltrating porous or roughened substrates with various liquid perfluorocarbons. This prevents adhesion to the underlying substrate through the formation of a stably immobilised, molecularly smooth, liquid overlayer.

Non-stick, ultra-repellent and self-healing, SLIPS provided a promising starting point for a catheter coating. But it also relies on a thin liquid layer on a hard surface, and in a complex and hostile biological system that approach doesn’t work well. So, Howell proposed an infused biocompatible polymer with both liquid on the surface and a bulk of liquid beneath it. When the liquid on the surface is removed, more moves up from within the polymer to replace it.

In vivo tests show that the technology works well in the body and on the laboratory bench. In mice, the liquid-infused coatings prevented 95% of proteins from binding to the catheter.

“The catheter is so slippery that it also prevents damage to the bladder, which in turn prevents protein recruitment,” adds Flores-Mireles. “Now, we can target multiple pathogens with one technology, which is better than developing new vaccines or anti-microbials.”

Like SLIPS, the new technology devised by Howell and Flores-Mireles is inspired by the Nepenthes pitcher plant, which uses a liquid membrane to trap insects. Previously,
state-of-the-art liquid-repellent surfaces have been modelled on lotus leaves, which have rough, waxy surfaces that are extremely hydrophobic. However, materials inspired by lotus leaves are less effective against oils, cannot self-heal and are fragile under stress.

“Nature has had billions of years to create innovative solutions,” remarks Howell, whose group, Inspired by Nature, works to understand and ultimately control biological systems through surface interactions and other environmental factors. “Imitating nature is the best way forward for addressing many challenges. Our materials science can now replicate the properties of natural materials with a high degree of fidelity.”

For application in catheters, the project is still in its early days. The NIH is providing funding to test the safety and efficacy of the technology, though the development of a commercialised product may take five or ten more years.

The potential of novel coatings

Howell and Flores-Mireles are certainly not alone in carrying forward the potential of novel coatings to improve the performance of medical devices used inside the human body. Another recent innovation stems from a research team at the Peter the Great St. Petersburg Polytechnic University, where Maxim Maximov, of the school’s Institute of Mechanical Engineering, Materials and Transport, has led the development of a coating for titanium implants to improve osseointegration.

Working with colleagues from St. Petersburg State University, Maximov’s team sought to accelerate the integration of titanium implants into bone tissue. Its solution was to create a new method for applying a uniform layer of titanium oxide, at the nanometre scale, on to titanium carcass structures that can be used as implants.

A range of coatings, which were applied using atomic layer deposition (ALD) in a vacuum, were extensively tested by the research team in varying compositions, thicknesses and structures, and it was found that if a layer of silver nanoparticles was applied first, the implants benefited from the element’s natural antibacterial properties.

The result is not only better osseointegration, but also a greatly reduced risk of implant rejection. According to the research group, the key factor in the successful use of silver nanoparticles is size and morphology, which need to be chosen to prevent toxicity while maintaining the material’s beneficial properties.

“We started applying silver nanoparticles on the surface of titanium, since this chemical element obtains useful antibacterial properties and should reduce the risk of implant rejection,” said Denis Nazarov, Research Park, St. Petersburg State University in a statement. “However, to use the silver coatings freely, it is necessary to adjust the conditions and the general method of obtaining the material.”

Whether inspired by nature or driven by the known properties of chemical elements, innovation in medical device coatings is moving forward apace. The challenges they face are numerous – ageing populations, antibiotic resistance and unprecedented reliance on implanted devices – but the research looks promising.