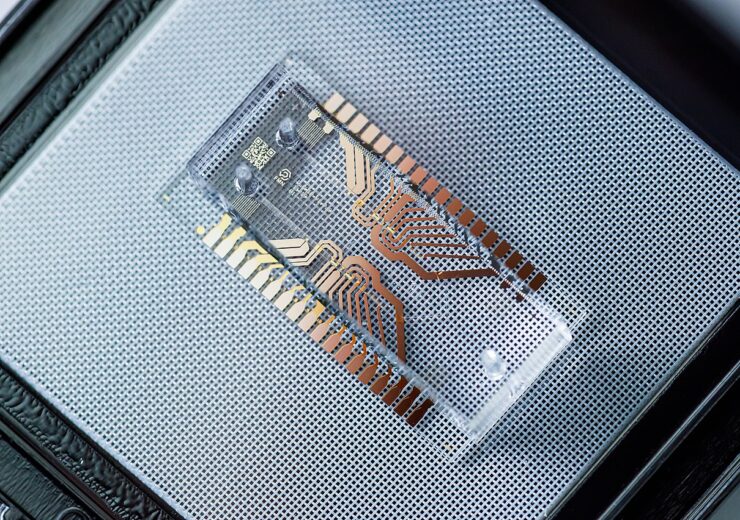 Microfluidics are used in the analysis of blood and other human samples (Credit: FMN Laboratory, Bauman Moscow State Technical University)

Microfluidic or ‘lab-on-a-chip’ devices are commonly used to analyse blood, and other fluid samples. A new chip takes this technology one step further by adding a 3D cavity where particles spin around, making them easier to observe. Andrew Tunnicliffe speaks to researchers from RMIT University involved in developing this technology about its potential applications in microfluidics.

It’s an area of research that has only recently become more achievable, and as a result has gained more attention.

Understanding the impact of flow-associated forces on circulatory blood cells has, Sara Baratchi says, been a struggle for biologists – but things may be set to change.

Baratchi, a postdoctoral research fellow at the RMIT University in Australia, and her team have been working on a solution: a microfluidic, lab or organ-on-a-chip device they believe will revolutionise fluid analysis, enabling more tailored experiments in drug development and disease research, and may even transform water contamination testing and medical diagnosis in natural disaster zones.

“The focus of my lab is to develop microfluidic-based ‘organ-on-a-chip’ models of the human circulatory system and use it to study the effect of hemodynamic forces on cellular function and dysfunction,” says Baratchi.

Smaller than a grain of sand, this low-cost, portable and easy-to-use device may make it a practical tool almost anyone can use.

“These enable us to study the physiological and pathophysiological responses of the human circulatory system at the cellular and molecular level, and will reduce the need for animal models,” explains Baratchi.

Although microfluidic devices are now commonplace, this research – funded by the Australian Research Council – is a further advance in that technology.

More traditional devices analyse blood and fluids by pushing them through a series of narrow channels on the chip, often around the size of a postage stamp.

However, this new device has an additional narrow channel comprising a three-dimensional cavity where fluids can be spun thanks to the cavity’s ability to replicate a mini vortex.

The channel and cavity were made through a liquid metal drop on to the silicone mould when making the chip – liquid metal means the device holds its form during moulding.

Once the moulding is complete, the liquid metal is removed to leave the channel and a spherical cavity ready to use as a mini centrifuge.

“When the fluid sample enters the spherical-shaped cavity, it spins inside the cavity,” says Khashayar Khoshmanesh, associate professor and co-researcher at RMIT University.

“This spinning creates a natural vortex that, just like a centrifuge machine in an analytics lab, spins the cells or other biological samples, allowing them to be studied without the need for capturing or labelling them.”

The research offers a simple method of fabricating nearly spherical dome structures on top of the lithographically patterned microfluidic channel – something that previously was not possible.

This enables analysis of the smallest of samples, even down to 1ml of blood or water.

It can also be used to examine bacterial cells measuring as little as 1µ to all the way up to 15µ, the size of the largest of human cells.

A breakthrough for the field

Studying the impact of flow-associated forces on circulatory blood cells has been fraught with difficulty, but now Baratchi believes this micro device could herald a new age of research.

“This device allows us to expose blood cells to the disturbed flow conditions that they usually experience in the big vessels, and investigate the direct effect of those forces on the cellular function – which has not been possible before,” says Baratchi.

“Areas of blood vessels that experience disturbed flow are more prone to the development of atherosclerosis.”

Thanks to its soft spherical cavities, the device has the potential to imitate human organs and their function.

This will allow researchers to gain an even better understanding of how cells behave in various flow conditions or drug interactions.

“This way we can mimic the response of blood cells under disturbed flow situations, such as at branch points and curvatures of coronary and carotid arteries, which are more prone to narrowing,” Baratchi explains.

The ability to be able to analyse cells as if they were in the body is a massive breakthrough – one made possible by the collaboration of the RMIT team and technologists from the School of Engineering and mechano-biologists in the School of Health and Biomedical Sciences.

Similar devices to this are being investigated by research teams all around the world.

The Wyss Institute in Massachusetts in the US stated that they have the potential to enhance and advance drug research and development, while cutting the number of animals tested on.

In addition to the many years it can take to test a single compound, these efforts can often cost in excess of $2bn.

It is clear that there is a strong need to continue investigating alternative ways to model human diseases in vitro, to accelerate the development of new drugs and advance personalised medicine.

Researchers at The Wyss Institute have been working on devices that replicate what they have described as the “microarchitecture and functions of living human organs, including the lung, intestine, kidney, skin, bone marrow and blood-brain barrier”.

This is set to make waves, and not just within the medical device industry.

“We took a game-changing advance in microengineering made in our academic lab and, in just a handful of years, turned it into a technology that is now poised to have a major impact on society,” said Donald Ingber, cell biologist, bioengineer and the founding director of the Wyss Institute.

The work at The Wyss Institute has included modifying microchip manufacturing processes in the pursuit of organs-on-chip devices made up of a flexible polymer containing hollow microfluidic channels lined by living human-organ-specific cells interfaced with a human endothelial cell-lined artificial vasculature.

The team describe their devices as “living, three-dimensional cross-sections of major functional units of whole living organs” that offer a chance to see the “inner workings of human cells in living tissues within an organ-relevant context”.

However, Baratchi and her team have taken this one step further, opening the possibility of using the device to analyse water for parasites and other bacteria that could be damaging to human health.

This is a hugely significant step as the detection of potentially harmful pathogens in water sources has long been a challenge, largely because in these circumstances often investigators don’t know exactly what it is they are looking for.

This device, due to its portability and low cost, will be especially beneficial in developing countries where geography and economics often pose significant challenges.

Using the vortex, the device can identify impurities with far greater ease than has previously been possible.

Baratchi’s work is ongoing, and currently includes the development of a pressure pump to operate the device.

Another small, low-cost innovation, the pump – which is constructed of latex balloons – will work seamlessly with the device.

Together with a smartphone to capture images, the team say the combination will “make a low-cost, self-sufficient and entirely portable point-of-care diagnostics device”.

“We are working on the devices to further improve them and to create a complete model of the circulatory system; for example, including endothelial cells and smooth muscle cells of the vessel wall,” Baratchi explains.

With researchers working hard to further develop devices of this kind, it is clear they will continue to dramatically impact the way in which research is conducted, patients are treated and even, as the Wyss Institute’s work shows, illnesses are protected against, potentially saving a huge number of lives.