Machine-to-machine (M2M) communication, or the internet of things (IoT), is a well-established technology that has enabled bins to declare themselves full, or smart gas and electricity meters to tell consumers (and their utility companies) how much energy they’re using. Kim Thomas explores its utility in the medical sector, and wonders how the vast amounts of data it collects might best be put to use. 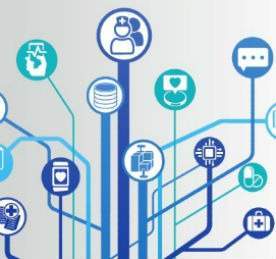 The internet of things (IoT) is a rapidly growing field in healthcare. MarketResearch.com claims the sector will be worth $117 billion by 2020, while in a report entitled ‘The Digital Revolution comes to US Healthcare’, Goldman Sachs predicts it will soon bring savings of at least $300 billion to the US medical sector. About two thirds of those will be from better management of chronic health conditions, such as COPD, heart disease and diabetes, in patients’ own homes, removing the costs of admitting them to hospital. Digital healthcare, the Goldman Sachs report says, can “revolutionise the healthcare industry by making diagnosis, treatment and prevention widely accessible at a fraction of current costs.”

There are two areas in which machine-to-machine (M2M) communication promises to transform healthcare provision: telemedicine (or remote monitoring) and big data analytics. There are opportunities to use it for remote monitoring within a hospital setting. In one private Romanian hospital, for example, patients wear tracking bracelets with an emergency button. If they press the button, staff can find them instantly. In other hospitals, the traditional cardiotocography (CTG) systems used during labour to monitor a foetus’s heart rate are being replaced by wireless monitors that can alert an expert obstetrician or midwife outside the labour ward if anything is amiss.

Telemedicine is most frequently used to monitor patients in their own homes. Deutsche Telekom, which has its own M2M competence centre, has been at the forefront of developing healthcare applications for the technology. Its Smart Emergency Home Call System, for example, is used to support elderly people at risk of falling. Sensors installed around the home detect if someone has fallen and automatically notify an emergency call centre.

Deutsche Telekom has also co-founded Germany’s first regional telemedicine network. In Brandenburg, 500 high-risk heart patients have been given devices that record their weight and blood pressure every day, and even generate an ECG. That data is then transmitted, securely and directly, to the patient’s electronic health record (EHR), which is held in one of two telemedicine centres. A team of doctors monitors the data, and, in the event of any danger signs, can inform patients, their general practitioners or cardiologists or, if necessary, emergency help. Because patients’ data is stored in the EHR, their own physicians will have access to it at face-to-face appointments.

Telemedicine has clear benefits in Western European countries, where the combination of ageing populations, an increase in the number of people with chronic conditions and a shortage of general practitioners is putting immense pressure on health services. Networks such as the one in Brandenburg improve the quality of life for patients who no longer need to travel so often for appointments, and who are likely to need fewer hospital stays. The burden on the health service is also substantially reduced.

Governments are waking up to the benefits of telemedicine. In Germany, the technology has been boosted by the country’s Secure Digital Communications and Applications Act, which came into force earlier in 2016.

Analytics could reveal the telltale signs of an imminent stroke. This could lead to algorithms that enable clinicians to spot patients in danger, and to act immediately upon that information.

The legislation introduces an electronic healthcare card as a means of recording patient data, as well as a telematics infrastructure through which health professionals can communicate.

Other countries are also adopting telemedicine, albeit on a smaller scale. In the UK, the NHS is running a number of local test-beds to pilot telemedicine, in collaboration with technology partners such as Philips and IBM.

The Diabetes Digital Coach project is recruiting diabetes patients in the west of England to use wearable technologies that measure blood pressure, activity, heart rate, cholesterol, and blood sugar levels, data that will then be sent to an IoT platform. This will provide real-time feedback to patients about their condition, who will be helped to manage it (for example, with dietary advice) through a set of smartphone apps. The manufacturing design will also allow patients to share the data with their clinicians.

Another UK project, Technology Integrated Health Management, is running in Surrey, and will install sensors in the homes of people with mild dementia, with the aim of detecting changes in behaviour that might predict falls, such as irregular energy consumption or a change in pulse. The data will be monitored by a dedicated team that will be alerted to any danger signs so that it can send a doctor to the patient’s house.

Healthcare monitoring is not just for the elderly, or those with long-term illnesses. Manufacturers are now embracing M2M technology fully: there are now an estimated 165,000 healthcare apps on the market, and three billion were downloaded worldwide in 2015. Many of them enable users to monitor their own vital data, such as blood glucose level, weight, temperature, pulse and blood pressure. The popular Fitbit device, for example, enables users to record heartrate and number of steps walked, while the AppleWatch has sensors that collect data on physiological functions such as pulse and blood pressure that can then be used by apps. These apps are simpler and quicker to produce than intensive machines, and yet are still able to produce results usable for those in healthcare.

At the moment, most data from such devices is kept by the user for their own benefit, but that doesn’t have to be the case. In principle, the data could be automatically sent to a central database, so that the user’s clinician is alerted to any anomalous readings. That data could even be integrated with the patient’s electronic healthcare record. Insurance companies are also showing an interest in using such data to incentivise customers to keep healthy by offering lower premiums.

There are barriers to using personal healthcare data in this way, however. With thousands of apps on the market, it isn’t easy to know which are reliable, and only apps with a designated medical purpose are currently regulated by the EU. Overworked general practitioners may be reluctant to take on the additional burden of collecting data from apps, with the risk of being sued if they miss an important sign that something is wrong.

The Goldman Sachs report paints a more optimistic picture of trends in the US, where the Food and Drug Administration (FDA) has laid out guidelines to regulate digital health technologies, and has already approved more than 100 digital health apps. The report also argues that recent trends such as government legislation to mandate the digitisation of clinical data, along with greater investment in the space and an increased burden on consumers to fund their own healthcare, will all drive adoption.

The second opportunity provided by M2M lies in its ability to generate population data on a large scale. At the moment, most data held by healthcare systems is locked away in silos. Even a single hospital may have separate patient record systems in different departments that don’t work together.

The huge amounts of data (‘big data’) transmitted by networked devices, such as wearables and smartphones, can be immensely revealing if collected and analysed. Analytics could reveal, for example, the telltale signs of an imminent stroke. This could lead to algorithms that enable clinicians to spot patients in danger, and to act immediately upon that information.

There is also potential to combine the information from networked devices with other patient data, such as patient records, to create an even more detailed picture.

Although large-scale data collection is still in the future, there are signs of progress. Location data automatically gathered from mobile phones is being used to track the movement of people and hence the spread of epidemics, such as Ebola in West Africa or dengue fever in Pakistan, enabling healthcare decision-makers to pinpoint the best places to allocate resources.

Meanwhile, Apple and IBM are collaborating on a platform that will allow users of the iPhone and AppleWatch to share data with Watson Health, IBM’s healthcare analytics offering, which has the capacity to analyse biometric data from millions of users.

In practice, there are a few hurdles to the large-scale collection and analysis of patient data. The most obvious difficulties relate to security and information governance. Most M2M communication takes place over wireless networks, which are more vulnerable than fixed networks, and therefore pose greater security challenges. Strong encryption and authentication protocols are a prerequisite.

Currently, many consumer wearable devices are far from secure, and even data stored in the cloud can be vulnerable to hacking. Healthcare data is frequently targeted: in 2014, for example, a US provider, Community Healthcare Systems, said that Chinese hackers had stolen the personal information of 4.5 million patients. Providers need to work together to develop common standards for the secure transmission and storage of private healthcare data – this will be vital to manufacturing future healthcare devices.

Location data automatically gathered from mobile phones is being used to track the movement of people and hence the spread of epidemics, such as Ebola in West Africa.

In EU countries, access to patient data is governed by strict regulations about information governance. In the UK, a plan under the National Programme for IT (NPfIT) to make patient imaging data – such as MRI scans and X-rays – available to every hospital in the country was eventually canned because of the complexity of the information governance requirements. Making patient data available to third parties, such as academic researchers, requires workable systems of information governance that will have to be hammered out in each country. In a conference last year, biometric expert Leslie Saxon from the University of Southern California called for a “UN for biometrics and security” that would ensure healthcare data is handled responsibly and not influenced by interested third parties.

Technical barriers must also be overcome. Work will need to be carried out to improve existing IT infrastructure; even in many advanced healthcare systems, there is still a heavy reliance on paper-based records. To be successful, data analytics requires data from multiple different systems, enabling doctors to have the fullest possible picture. This will require the adoption of open standards and an agreement between vendors to collaborate. Many have already signed up to the Integrating Healthcare Enterprise (IHE) initiative to improve the interoperability of healthcare systems.

While population-wide data analytics may be several years away, telemedicine is already here and manufacturers must keep up to these new trends. There is a large market of preventative care devices that can be marketed and distributed.

If the current small-scale implementations continue to deliver financial savings, then we can expect to see much wider adoption very soon.