The field of robotic laparoscopy has a bright future, with several competitors lining up to challenge the incumbent market leader Intuitive Surgical 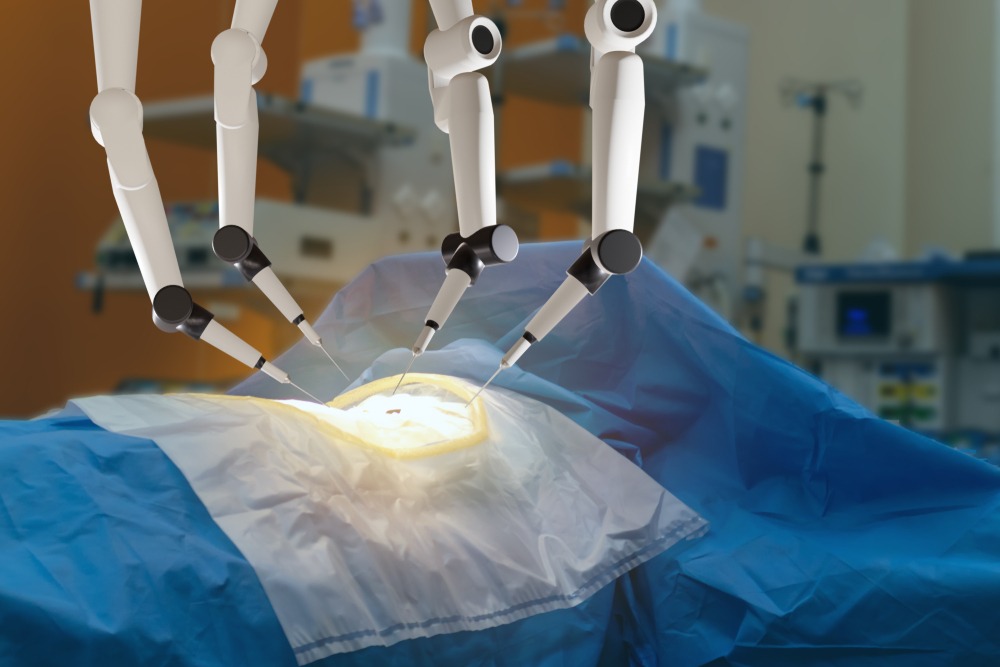 The market for robotic laparoscopy devices is expected to surge with increasing competition (Credit: Shutterstock/MONOPOLY919)

Surgical robots have been growing slowly in prevalence since the late 1980s, when the first operative device was introduced. One trend to emerge fairly soon after was the use of robotic arms in laparoscopic procedures, a method with now heavily-proven patient benefits, but a technology that carries a high cost for hospitals.  Peter Littlejohns finds out from Asensus Surgical CEO Anthony Fernando why the benefits of robotic laparoscopy procedures have yet to be reflected in their uptake, and what an injection of competition could mean for the future.

Ten years ago, the chances are a laparoscopic procedure, known colloquially as keyhole surgery, would have been performed using a long, slender implement with grasping or cutting tools on the end.

These tools would be operated by members of the surgical team, sometimes using multiple laparoscopes at once, to cut, hold and stitch as required.

Now, depending on the procedure, it’s not unlikely that certain laparoscopic surgeries are performed by a robot.

But far from the futuristic scenario hinted at in the many variations of the phrase The Robot Doctor Will See You Now seen in headlines – the reality is far less automated.

Instead, the up-to-six robotic arms of these modern laparoscopic surgery machines are an extension of a surgeon’s physical capabilities, giving them the extra degrees of freedom required to access parts of the body that would be limited by a regular laparoscope or by the human arm.

Although the journey of using robots for physically invasive surgeries began in 1985, when a stereotactic brain biopsy was carried out by the Puma 560 from pioneering robotics firm Unimation – much of the credit for commercialising robotic assisted laparoscopy is given to da Vinci.

Not the famous painter and inventor, but the first commercial laparoscopic robotic device.

Launched by Sunnyvale, California-based Intuitive Surgical back in 1998, the first da Vinci was cleared for general surgery by the FDA in 2000.

Since then, further iterations of the technology have been used to perform thousands of surgeries in the more than 5,000 hospitals with a da Vinci in residence.

Intuitive isn’t the only player in town right now, but Anthony Fernando, CEO of competitor Asensus Surgical doesn’t shy away from crediting the firm for the paradigm shift it started in the field of robotic laparoscopy.

“They [Intuitive] converted open surgery to minimally-invasive surgery and reduced the length of stay at the hospital.

“This reduction in cost from the length of stay offset the incremental cost of the instruments.

“But in the process of doing that, they created a new minimally-invasive technique that was unique to them.

“It wasn’t laparoscopy, nor was it open surgery – it was something in between.”

The value of using robotics in surgery can be determined by the type of operation for which it is used.

A recent article in Nature stated that in 2003, less than 1% of surgeons in the US performed a robotic-assisted radical prostatectomy (RARP) in preference to open or laparoscopic surgery – but by 2014 RARP accounted for 90% of radical prostatectomies across the country.

Despite this, according to Fernando, around half of all surgeries are done using the laparoscopic approach, but less than 5% are carried out using robotics.

He believes this relatively small percentage is largely due to cost, and like the other competitors to Intuitive, is banking on an increase in competition resulting in more market penetration in the field of robotic laparoscopy in the future.

The cost and value of robotic laparoscopy

If a hospital wants to harness the power of da Vinci, they have to pay a flat cost around the $2m mark, dependant on which model they purchase, and more to cover disposable implements attached during surgery.

Although competitors like Asensus with its Senhance offering, CMR Surgical with Versius and the incoming rival Medtronic with its Hugo bot are keeping their cards close to their chests publicly as far as price tags go, it’s this high cost they hope to compete on.

“It’s not so much the cost of capital but the cost per use that’s a big hindrance,” says Fernando.

“The argument [from hospitals] is that laparoscopy is super effective, there are many trained surgeons, and it’s really economical, so there’s no need for a laparoscopist to get a robot.”

Where that argument breaks down, Fernando says, is when hospitals have to consider the physical and mental ramifications of conducting several laparoscopies in one day.

“In the US, the majority of the good laparoscopic surgeons are over the age of 50, and out of that cohort, more than half have had some sort of back or shoulder surgery because of an injury caused by standing in very awkward positions for hours each day.

Mitigating these risks is where Fernando sees the value of robotic laparoscopy, and he says his company’s Senhance robot can do it at 70% of the per-procedure cost that da Vinci can.

The future of robotic laparoscopy

Many analysts expect the competition from new players in the market to reduce the average cost paid by hospitals to acquire the capacity to perform robotic laparoscopy procedures – but in the future, that alone won’t determine who the dominant players are.

Fernando asks: “When you think about robotic laparoscopy today, what have we done?”

“We can hold an instrument and manipulate it in a very stable and precise manner, but that’s all, whether it’s CMR, us or Intuitive, we do the same thing.

“The next phase is the cognitive side of things, which is what we’ve already launched the Intelligent Surgical Unit for.”

Robotic laparoscopy systems are carried out by surgeons sat at a computer console, through which they can view the inside of a patient using a camera on the end of each robotic arm.

Asensus Surgical’s Intelligent Surgical Unit is the name given to a piece of machine-learning technology in the software that runs its own consoles which records data from successful surgeries and uses it to give best-practice guidance to others.

“We’re building a digital twin for the surgeon. We can learn from everywhere what good surgery looks like, and help deploy it anywhere,” Fernando adds.

In practice, this will appear as physical cues for surgeons, and due to the nature of training a machine-learning system, it will apply more to routine, formulaic surgeries than those of a more complex nature that rely heavily on experience and skill.

“For instance, when you do a gastric sleeve you’re focusing on stapling a certain portion of the stomach.

“There’s a formulaic methodology that surgeons use to decide where to put the staple line, but if this rough calculation is not done right you have potential acid reflux as well as other side effects.

“But we are now able to measure, in 3D space and in real time, the size of the stomach, and be very precise and avoid that.”

One benefit of this approach is that this “navigation system”, as Fernando describes it, can account for individual patient differences and complications by pulling together a range of data from similar surgeries done on similar patients to take some of the mental stress of deciding next steps from the surgeon.

In doing this, Asensus hopes to reduce the mental fatigue associated with current laparoscopies and prevent some of the risk associated with surgeries carried out after a laparoscopist has already performed several procedures in the same day.

Fernando adds that this intelligent assistant could even supplant the long-awaited telesurgery – procedures carried out remotely, so a surgeon can sit at a console and control robotic arms located at great distances away.

Telesurgeries have been performed already, but they aren’t considered to be a reliable option for most patients, especially when longer distances increases the risk of lag time between a surgeon’s input and the movement of a robotic arm – that is until 5G is pervasive enough to cut lag altogether.

“5G will allow that, but the reason I say ‘will’ is that you actually need true 5G,” says Fernando.

“There’s true 5G in London and in about two cities in the US, but that’s it.

The distinction he draws is between the current mobile 5G in wide circulation and another more complex variation of the technology that provides much stronger connections over long distances – but even with that technology incoming in the near future, Fernando questions whether it will be necessary.

He asks: “If we are successful in digitising surgery and leveraging machine learning algorithms and AI, do you actually need telepresence?”

Will there ever be a truly automated robotic laparoscopy?

Once machine learning comes into play, it’s only a matter of time before we’re talking about how near in the future there will be full automation in robotic laparoscopy, with little to no human intervention.

But when you’re talking about the risk of a life-altering mistake in the surgical theatre, it’s obvious that hospitals and regulators are going to be reluctant to completely hand over the keys to an AI.

As it is, Fernando says Asensus took 12 years to build and bring Senhance to market with all of the required regulatory clearance.

But despite this, he doesn’t rule out the prospect of more automation in laparoscopic surgery in the future – although he doubts that having the capability will mean that it is adopted.

He says: “There will come a time that the capability will exist,” but he asks “will surgeons be willing to take advantage of that?”

“A plane can take off and touch down by itself, but does it happen today?

“Autopilot technology has existed for about 30 years now, but still there are two pilots in every aircraft that takes off.”

When it comes to robotic laparoscopy however, Fernando believes the future ten years will yield a dramatic uptake in the technology.

“It will be pretty dominant,” he concludes