See the light – the evolution of femtosecond lasers

Femtosecond lasers for cataract surgery could provide better care for patients than conventional methods. Kerry Taylor-Smith speaks to Mr Bobby Qureshi of the London Eye Hospital – the first surgeon in the UK to use femtosecond lasers – about the technology and its future. 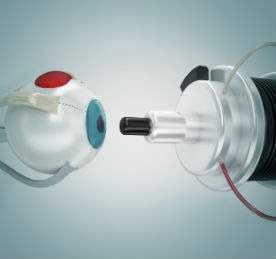 Hailed as the greatest breakthrough in cataract surgery in the past quarter of a century, femtosecond lasers have the potential to improve the safety and accuracy of delicate procedures to restore vision. Studies have shown the use of lasers in all stages of cataract surgery is safer and superior to current manual methods, which rely on the expertise and experience of the surgeon.

Cataracts are an inevitable part of ageing and will affect more than 50% of the population. It is not known why they develop but, as we age, changes in the eye’s lens cause it to become cloudy. This happens over time and, although strong glasses may treat distorted vision for a while, the only way to fully restore sight is through surgery.

Traditionally, the procedure, carried out under local anaesthetic, involves removing the affected lens through a small opening in the eye and replacing it with a clear plastic one. The surgeon will make an incision in the cornea with a mechanical microkeratome – a small knife with a metal or diamond blade – before tearing a circular opening in the clear capsule around the lens in a procedure called an anterior capsulotomy.

I believed in the technology and could see it would become integral to how we would perform surgery in the future. Five years later, the whole of the UK is now following suit.

After this, the surgeon is able to remove the cataract. Phacoemulsification, which employs ultrasonic energy to emulsify the cataract-affected lens, is the most widely used technique. The lens is then broken down into a liquid and removed in a process called capsulorhexis before the new intraocular lens is inserted.

On the right wavelength

The surgery is not without its problems, however. For a start, it relies on the manual dexterity of the surgeon. The use of mechanical blades can lead to unexpectedly thick flaps, flaps with variable thickness, buttonholes or partial flaps – all of which can affect the outcome of the surgery – while phacoemulsification carries the risk of corneal injury caused by the long duration of ultrasound exposure, damage caused by heat or mechanical manipulation, and injury caused by the fragmenting lens.

Although there are improvements being made – for example, to the mechanical microkeratome – there is an alternative: lasers, and femtosecond (FS) lasers in particular. In the 1970s, research began to focus on the use of lasers in ophthalmic surgery. The most widely adopted is the neodymium-doped yttrium-aluminium-garnet (Nd:YAG) laser for posterior capsulotomy in pseudophakic patients with posterior capsular opacification, a complication of cataract surgery, which is a technique first described in 1980.

The first ophthalmic FS lasers were designed in the early 1990s at the University of Michigan by Dr Ronald Kurtz – who discovered the technology had applications for ophthalmic surgery after examining a retinal injury of a graduate student that was accidentally caused by FS laser pulses – and Dr Tibor Juhasz; together, they went on to found IntraLase Corp.

In 2001, FS lasers were used in a new procedure to correct problems with vision: laser-assisted in-situ keratomileusis, or Lasik as it has become commonly known. Since FS lasers’ introduction, they have offered surgeons greater choice and control over the diameter and thickness of the flap creation necessary for this corrective procedure.

FS lasers are designed to function at 1,053nm, a wavelength not absorbed by the optically clear tissues of the eye nor affected by corneal magnification. The near-infrared scanning pulse, with each pulse lasting one millionth of a billionth of a second, causes tissue disruption. Photodisruption is essentially induced by the vapourisation of target tissues that occurs when the focused laser energy is increased to a level where plasma is generated.

This plasma expands, causing a shockwave, cavitation and bubble formation. The bubble itself then expands and collapses, leading to separation of the tissue.

These early FS systems operated at around 15kHz and thus required a lot of energy to operate. Newer devices have an increased repetition rate, some as high as 150kHz, so the technology now uses smaller amounts of energy than traditional techniques and spares the delicate tissue around the area from collateral damage – a big disadvantage of longer-wavelength lasers.

In 2010, US FDA gave the green light for these types of lasers to be used in cataract surgery. In combination with other high-tech developments such as 3D video imaging and true image-guided surgical planning, they offer a safer and superior alternative to traditional methods.

The eyes have it

Mr Bobby Qureshi, medical director and consultant ophthalmic surgeon at the London Eye Hospital, has been using FS lasers to perform cataract surgery since 2011. He was the first doctor in the UK to do so and remained the only surgeon with an FS laser in the country for several years.

"I believed in the technology and could see it would become integral to how we would perform surgery in the future," he says. "As usual, after initial criticism by my colleagues, five years later, the whole of the UK is now following suit."

"We can now perform cataract surgery in about 300 seconds, without using a needle or a knife, through a pinprick at micron levels of accuracy. It is just a leap forward, and the whole world will follow as it is safer and heals faster," he adds, although he admits there is a downside too: "At present, it’s more expensive because of the cost of the equipment."

Qureshi believes one of the main benefits of using FS lasers is that there is no need for needles or knives.

"Surgery involves cutting the body and the tissues that make it up. We do this with our hands under direct sight or under a microscope for fine procedures," he says. "The FS laser makes a 3D image of the eye in real time, and the computer analyses this image so it knows where things are at sub-micron levels of accuracy and tracks them even as the patient moves a bit.

"A laser pulsing at one millionth of a billionth of a second then places millions of tiny, tiny laser pulses in a row inside the eye, guided by the computer’s analysis of the real-time 3D image. It completes what would take five minutes or more of surgery using needles and knives in 30 seconds, at levels of accuracy a human cannot achieve. It is a no brainer – if you can have it, you would."

So, instead of using a knife to create an incision in the cornea, the surgeon creates a precise surgical plan using optical coherence tomography and uses the FS laser to cut an opening with a specific location, depth and length.

Additionally, instead of manually tearing a circular opening, the laser performs the anterior capsulotomy. Studies have shown that FS lasers have greater accuracy and reproducibility in terms of size and circularity of the self-healing incisions, and enable better centring of the intraocular lens than traditional techniques.

A further advantage of FS lasers, says Qureshi, is that they use less energy to remove the cataract, thus leading to less bruising and faster healing, and there are also fewer risks and complications during the surgery. The laser is used to break up and soften the cataract prior to phacoemulsification, resulting in less energy being used and less collateral damage to surrounding tissues.

completes what would take five minutes or more of surgery using needles and knives in 30 seconds, at levels of accuracy a human cannot achieve.

One study has shown that FS-laser-assisted surgery reduced the ultrasound power by 43% and the time of phacoemulsification by 51%. The use of lasers could also reduce the likelihood of capsule breakage, meaning the new intraocular lens will be held in the proper position for clear, undistorted vision. As a whole, the use of FS lasers makes the procedure safer and less technically difficult than its manual counterpart.

Improvements are still being made, too: "They are getting even faster, more accurate, smaller and, hopefully, cheaper, allowing everybody to have access to this technology for routine cataract surgery," says Qureshi.

The NHS and London’s Moorfields Eye Hospital are currently running a four-year trial of 800 patients – half undergoing surgery with some of the steps performed using an FS laser and half receiving standard cataract surgery – to assess whether FS-laser-assisted surgery leads to improved vision and quality of life. The study is being funded by the National Institute for Health Research, and patients will be followed for a year after surgery.

But FS lasers aren’t just reserved for cataract surgery; they are also finding use in other ophthalmic procedures. They have been used to ‘bleach’ the lens through photolysis – reducing the amount of yellow pigment, rejuvenating the lens for between three and seven years, thus delaying the need for surgery by up to five years and reducing surgical volume by 35%.

"They are also now being used for softening the lens to rejuvenate it, and perhaps delay presbyopia or age-related long sight for some years, and for patients who have had cataract surgery with an implant to reshape the lens to sharpen focus or give additional reading vision," adds Qureshi.

FS lasers have the potential to revolutionise cataract surgery, playing a role in every step of the procedure, from creating precise and self-healing incisions to allowing strong and accurate capsulorhexis, and reducing the energy used in phacoemulsification. Moreover, the automation they allow means some of the most technically difficult stages of the process, and the surgery as a whole, are safer. The results from the NHS/Moorfields Eye Hospital trial could mean FS laser use becomes routine for cataract surgery; regardless, it certainly appears that they won’t be going away anytime soon.