Weight, cost and performance benefits have made synthetic polymers the first choice for medical devices in recent years, but an increasing emphasis on customisation and the advent of 3D printing is shifting attention to biopolymers. Joachim Storsberg, head of the Fraunhofer Institute’s department of polymers for biomedical engineering, walks Ross Davies through a potential step-change in manufacturing. 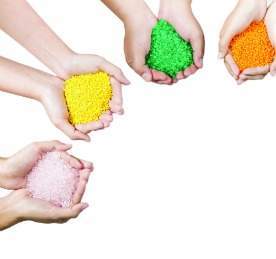 It is increasingly difficult to picture how medical devices were ever developed and produced before plastics and polymers. Lightweight, low cost and extremely flexible, polymers are the first choice for everything from implants and single-use devices to packaging.

This trend shows no sign of letting up; global demand for medical polymers was about five million tons last year, and is expected to exceed seven million tons by 2020. Plastics are regarded as much more flexible than traditional materials, such as glass and metal, and are frequently preferred for minimally invasive surgical procedures, which carry significantly lower risks and quicker recovery times.

"These are what you’d call your ‘classic’ polymers," says the head of the Fraunhofer Institute’s department of polymers for biomedical engineering, Dr Joachim Storsberg. "Each is very flexible in its own way. For instance, polyethylene can be used for blood bags and prostheses, such as knee and hip joints.

"Or, if a jaw needs to be reconstructed, parts made from it can be specially integrated to substitute the missing part of the joint. Similarly, polycarbonate can be specifically tailored for vascular prostheses."

Polymers are not so adaptable that they can be applied to any medical product, however, and each type’s suitability for a given device depends on its particular structural characteristics.

Storsberg’s credentials in this field are impressive. In 2010, he attracted international recognition for developing the world’s first corneal prosthesis, made from a mixture of plastic and hydrophobic polymer material.

"It is about isolating compounds, and looking at how they react with normal organisms. It is also about trying to take away the animal risk issue, and addressing some of the ethical questions concerning the use of animal-based polymers."

In April, he is slated to deliver a talk, ‘Improving Functionality of Plastics Towards Tailored Medical Devices’, at the InnoPlast Solutions conference in Orlando, Florida, US, part which will focus on the significant role biopolymers can play in developing more customised medical devices.

In spite of their long history in medicine – particularly wound coverage – Storsberg believes device manufacturers are yet to exploit the full potential of biopolymeric materials, despite mounting scrutiny of them in the medical press.

"[Manufacturers] could certainly do more, particularly in the field of implants," he claims. "You can use polymers, such as polylactic acids, to encapsulate drugs or you might have a coating around, say, a coronary stent. When the coating dissolves, it releases the drug."

Other biopolymers used in the medical arena include animal-derived heparin – which can be used as a coating to counter thrombosis – and hyaluronic acid. The latter, modified from chickens, can be applied to implants in several ophthalmic and plastic surgery procedures.

According to Storsberg, one thing deterring manufacturers from biopolymers, despite their clear advantages, is that major concerns persist over the risk of adverse immune reactions, particularly with those derived from animals.

"The big problem is that you cannot use every [animal-based] biopolymer," he says. "The same goes for plant-based polymers. Take cellulose: it’s the largest biopolymer we have, but we can’t make implants from it, because the patient would suffer from an adverse reaction and inflammation. There are many applications for biopolymers, but they cannot replace every polymer."

Consequently, studies are being conducted into the possibility of developing technologically enhanced polymers to replace animal-based biopolymers in more bespoke devices. One recently mooted solution is the use of genetically modified yeast cells.

"I think we will see a lot of modified yeast biopolymers coming through in the next four to ten years, creating more human-type collagens," says Storsberg. "Like the new biotech innovations we see coming through, we are now working on new kinds of problem-solving models using biopolymers. It is about isolating compounds, and looking at how they react with normal organisms.

"It is also about trying to take away the animal risk issue, and addressing some of the ethical questions concerning the use of animal-based polymers."

It could be years before such biotechnological advances are realised, confesses Storsberg. Furthermore, due to the complicated nature of biopolymer processes, lead-times to market are bound to be considerably longer ("perhaps ten years, or even more").That’s not to mention higher costs. Might these factors combine to detract manufacturers?

"The major issue for device manufacturers is scalability," he says. "You may be able to do something very well at a cell or culture level, but it is a very different matter to upgrade to large amounts of biopolymer matter. It often requires quite different techniques and experience."

Plastics and polymers might be part and parcel of the medical device realm, but manufacturers are obviously still bound by strict regulations, which are likely to become even more rigorous.

In-vitro device manufacturers proposing a switch to biopolymers from tried-and-tested glass and metal should therefore expect to have their work cut out in convincing legislators.

"Ultimately, the market is regulated by demand from customers but, of course, it is also regulated by politicians, legislators and regulators, who all play an important role. If manufacturers want to substitute one product or process for another, they must do so very carefully.

"Naturally, you also have devices in different classes and different levels of risk. For example, there are regulations about the use of biopolymers in contact lenses, but failure of this sort of product is unlikely to be that serious.

"However, failure in a coronary context is much more critical, so different classes of biopolymers have different influences. Either way, any sort of biopolymer must be tested very carefully before it can be used or developed."

And what of 3D printing? Forecastto transform the future of industrial manufacturing, two out of three US companies are in the process of adopting it, according to a recent PricewaterhouseCoopers survey.

"Ultimately, the market is regulated by demand from customers but, of course, it is also regulated by politicians, legislators and regulators. If manufacturers want to substitute one product or process for another, they must do so very carefully."

With its potential to shorten supply chains, save on product development times and, crucially, allow customers a choice of products tailored to their needs, 3D printing would appear to be a shoe-in for the medical devices sector.

"It could be a really cool thing, because you could make highly personalised implants," says Storsberg.

"We are already seeing it in action in some medical areas. Only the other day, in fact, I read about how it was now possible for one to print a 3D model of the heart based on computer tomography."

Predictably, the obvious potential comes with caveats. As Storsberg rightly identifies, at around €100,000, high-quality 3D printers are far from cheap, and safety approval could be a long time coming.

"There are a lot of regulations and requirements that need to be approved first to make it safe," he notes. "You also have to ask yourself if the device you are printing will have to undergo stress (within the body, for example), and whether 3D printing, which is built up layer by layer, is really an optimal production method.

"It depends on what you want the device to do, though. Constructing it, looking at the properties of the surface, ensuring the coating of the implant is integrated properly with the drug… all this is complex."

‘Complex’ might prove to be something of an understatement. If manufacturers are to slake the current global thirst for polymers and plastics – which can be applied to a greater range of specialised medical devices – significant investment in the appropriate technological research is a must.