The use of biocompatible implantable devices is becoming widespread. Dr Anthony Graham and John Moor of the National Microelectronics Institute discuss the microelectronic designs and technologies that are helping to create smaller devices and why it is essential for medical device companies to understand the electronic components that go into the manufacture of implantable devices. 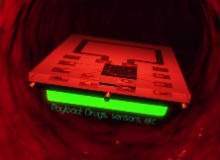 The end of the 20th century provided the test bed for IED markets, demonstrating benefits such as reducing pain, extending life, and rebuilding and monitoring health. Products that have broken through the technology barriers, and are now on the market are usually clustered around cardiac devices and neurological stimulators.

OrthoSensor is integrating mechanical transducers with electronics to assist surgeons with the adjustment of orthopaedic knee implants that can monitor factors such as pressure, strain, temperature and acceleration. As with cardio implants, the electronic components are hermetically sealed within the device, enabling the use of ‘standard’ electronics technology. The company’s initial product is designed to be disposed of at the end of surgery, but OrthoSensor has a roadmap that includes chronic ‘smart’ implants for the knee and spine. These applications demand further miniaturisation of the sensors and electronic components.

These early uses of implants are a far cry from what will be achievable over the coming decade as the capability of IEDs continues to grow at an astounding rate. Neurological stimulators, tumour monitoring and biological function-mimicking are just some of the exciting areas where devices are being deployed. Over the next decade, new systems will help people with disorders such as Parkinson’s disease, multiple sclerosis and depression. It is interesting to note that following this year’s Consumer Electronics Show, the X Prize for $10 million was offered by Qualcomm for a real-life tricorder device, the iconic health monitor used in Star Trek by Dr Leonard ‘Bones’ McCoy.

A cursory look at the innovation taking place reveals more examples. Research at the University of California, Berkeley, is packed with devices envisioned to process the direct brain recordings of heard speech. Imperial College London completed work on an artificial pancreas that demonstrates advances in combatting type 1 diabetes by drawing inspiration directly from nature. The system uses an electrochemical sensor that samples glucose levels every five minutes. If a high level of glucose is found, a small motor drives a syringe to dispense insulin; if a low level is detected then glucagon is dispensed instead. The main benefits are that it administers insulin in a manner similar to the biological system and removes the need for multiple insulin injections, giving more freedom to the patient while reducing the chance of error.

While many contemporary IEDs are stationary, Stanford University demonstrated a device at the International Solid State Circuits Conference that can propel itself without batteries through the bloodstream. The tiny device measures just 3×4mm and could carry drugs or sensors as a payload, thus having the potential for non-invasive surgery.

While there is an array of uses for IEDs, there are also engineering and design challenges. Design requirements include minimal weight and size, low power, wireless data and power, electromagnetic compatibility and an extended life with high reliability. In many respects, these are attuned to the consumer electronics markets as portable devices are driving size, power and wireless technology.

Opportunities exist in transferring semiconductor fabrication and design IP into biomedical implant design. As business ‘ecosystems’ develop in the implant market, innovating companies are likely to become interested in the specific design and reliability needs of implantable devices.

With longevity of operating life in mind, it is important that devices are powered appropriately. Improvements in battery technology, especially lithium-ion cells, now yield very high energy densities (0.2Wh/g) but small batteries for implants have lower efficiencies than could otherwise be obtained. A common alternative to batteries, or a supplementary source of power, is wireless induction. This method also enables data communication alongside relatively high power transfer.

Energy harvesting is another high-interest area for IEDs and will be ideal if the energy densities can be sufficiently improved. Energy sources such as motion (kinetics), fuel cells, infrared radiation and the thermoelectric effect have high potential. Minimising the device’s power requirements is of equal interest to increase its operational life. Designers will be able to continue to leverage technology from consumer markets and, since data rates (bandwidth) are modest for IEDs, they will also be able to use other techniques such as power scheduling and subthreshold operation; however, these advances do not come for free. While designs will benefit from low power and miniaturisation, designers will need to contemplate reduced electrical noise margins, localised heating and increased transient fault rates.

With electrical medical device regulations requiring operation with a ‘freedom from risk’, a design-for-reliability approach will be a necessity. This will encompass fault tolerance and redundancy, the design of which will depend on a higher system-level risk assessment and ‘failure mode and effect analyses’; for example, Boston Scientific has developed Safety Core, safety-critical redundant hardware for its cardiac rhythm products. It provides a back-up mode and ensures that a basic level of high-voltage therapy can be maintained in the case of primary hardware failure.

The space is complex not only due to engineering and medical challenges, but also because of associated issues such as product qualification, standards, reliability, safety, religion, ethics and legality. The medical and electronics markets have developed rigorous production and quality standards, but the challenge now is to integrate these separate systems as these disciplines are brought closer together.

Pivotal to engineering success is biocompatibility. This is a nebulous concept as, for example, biocompatibility depends on whether a device is for chronic or acute implantation and is reliant on the acceptable level of inflammatory response. The interface materials forming the device packaging are a focus here, but an implanted device will usually include exposed sensors or actuators, and these must also be biocompatible. Material science is a key discipline in this field and significant innovation and investment is required to create a successful implant.

Most manufacturers will be familiar with ISO standards for quality such as the ISO 9000 series, which are supplemented by market-specific standards such as ISO 10993 for biocompatibility, biodegradation and toxicity, and ISO 13485 and ISO 14971 for quality and risk management. Standards for active implants are centred in the EU around directive 90/385/EEC and in the US by the FDA in 21 CFR 860. As primarily Class III implants, these will also require pre-market approval. Meanwhile the semiconductor and electronics industry has mature standards for product quality and reliability (Q&R). Most of the tests are defined by JEDEC and the US military standard MIL-STD-883.

In many respects, medical implants will not stretch the performance of today’s semiconductor technology, such as operating temperature and temperature cycling: reliability across the -40°C to 125°C range needed for automotive and aerospace applications is certainly not a requirement for implants. Conversely, consumer electronics do not require the 20-plus-year lifetime of an implant that must operate in a harsh and constant chemical environment.

The JEDEC standard JESD22-A107 addresses corrosion resistance of electronic devices in a sodium chloride salt atmosphere, but this test doesn’t really make the grade for modelling the in vivo environment. Significant investment in Q&R characterisation and testing will also prevail in IED development due to the ever-increasing diversity of materials used for implants; this is compared with a more predictable and evolutionary semiconductor packaging industry roadmap.

However, the industry is beginning to ask what the Q&R requirements for medical implants are. The gauntlet has been thrown down by the International Electronics Manufacturing Initiative (iNEMI), which is leading a project to define these requirements. It consider severe stresses such as cumulative exposure to X-ray screening, the effects of magnetic fields, diathermy and local changes in chemistry.

Matters become even more difficult at the business end of an electronic medical implant. Exposed sensors are specific to
the task and so the number of materials requiring evaluation seems endless. Common materials such as platinum stimulus electrodes are likely to persist in these markets and their in vivo performance is well understood. The evolving needs for performance and miniaturisation are pushing for planar sensors integrated on the semiconductor die as these can be directly interfaced with tissue. The default materials are then defined by those used in semiconductor manufacturing, and invariably include silicon nitride as the IC surface passivation. Silicon nitride has been evaluated comprehensively in vitro and in vivo due to its widespread use and appears to be suitably biocompatible.

To avoid introducing further materials into the picture, some in vitro applications (DNA Electronics, Ion Torrent) attempt to sense through this passivation layer, but this is unlikely to be optimal for implants, as limitations include low sensitivity and potential reliability failure. Failures caused by electrical drifts are due to the interaction of the interstitial fluid with the passivation and so one solution is to open windows in the passivation to create metal electrodes. The available metal is limited to that used for signal and power connections within a standard chip. Semiconductor metallisation is predominantly an alloy of aluminium or copper and neither is biocompatible. Several methods to modify these are possible, but none are without limitation or complication.

Stepping up a level from the electrodes, there are also challenges at the electronics level. Even when standard semiconductor die are isolated from their subcutaneous environment, there are issues with design, packaging and reliability. At a device level, popular biocompatible packaging materials include PTFE, PDMS, silicone, polyurethane and parylene polymer coatings, and all display good moisture and chemical resistance; but, isolating the components within hermetically sealed packaging or a casing has the attraction of enabling standard IC technology to be used within.

At present, titanium is somewhat ubiquitous for casings due to its proven biocompatibility, with performance data leveraged from orthopaedic implants. Yet, while a metal case helps reduce electromagnetic interference, it is an obstruction when integrating wireless data communications and/or wireless power. This was one of the difficulties experienced by the Alfred Mann Foundation in its development of the BION neural-muscular stimulator. Initially, a hermetically sealed glass casing was used with standard IC assembly technology inside, which allowed for an inductive secondary power source and bidirectional telemetry. Reliability of these custom packages was adequate but there was room for improvement. The failure modes, including leakage failures induced by the in vivo chemistry and tissue encapsulation of the exposed electrodes, were not typical of the electronics industry.

While operating conditions are a predictable 37°C, thermal cycling tests were still beneficial in accelerating hermetic failures caused by the imposed physical stresses in vivo. A high-pressure saline test also accelerated these failure mechanisms. A redesigned ceramic casing fabricated from Yttria-stabilised tetragonal zirconia polycrystal (Y-TZP) improved reliability. While subsequent clinical tests showed good biocompatibility, the electronics industry is more used to establishing reliability with accelerated life tests. Some accelerated life test studies on Y-TZP have predicted reduced strength, but difficulties remain in determining suitable pass/fail test limits, such as strength, and in determining the most appropriate thermal acceleration factor used in the Arrhenius equation, which is indicative of the difficulties that the iNEMI project will encounter.