We look at how 3D printing is redefining biocompatibility in the implanted devices market as researchers are creating devices that work better in the body. 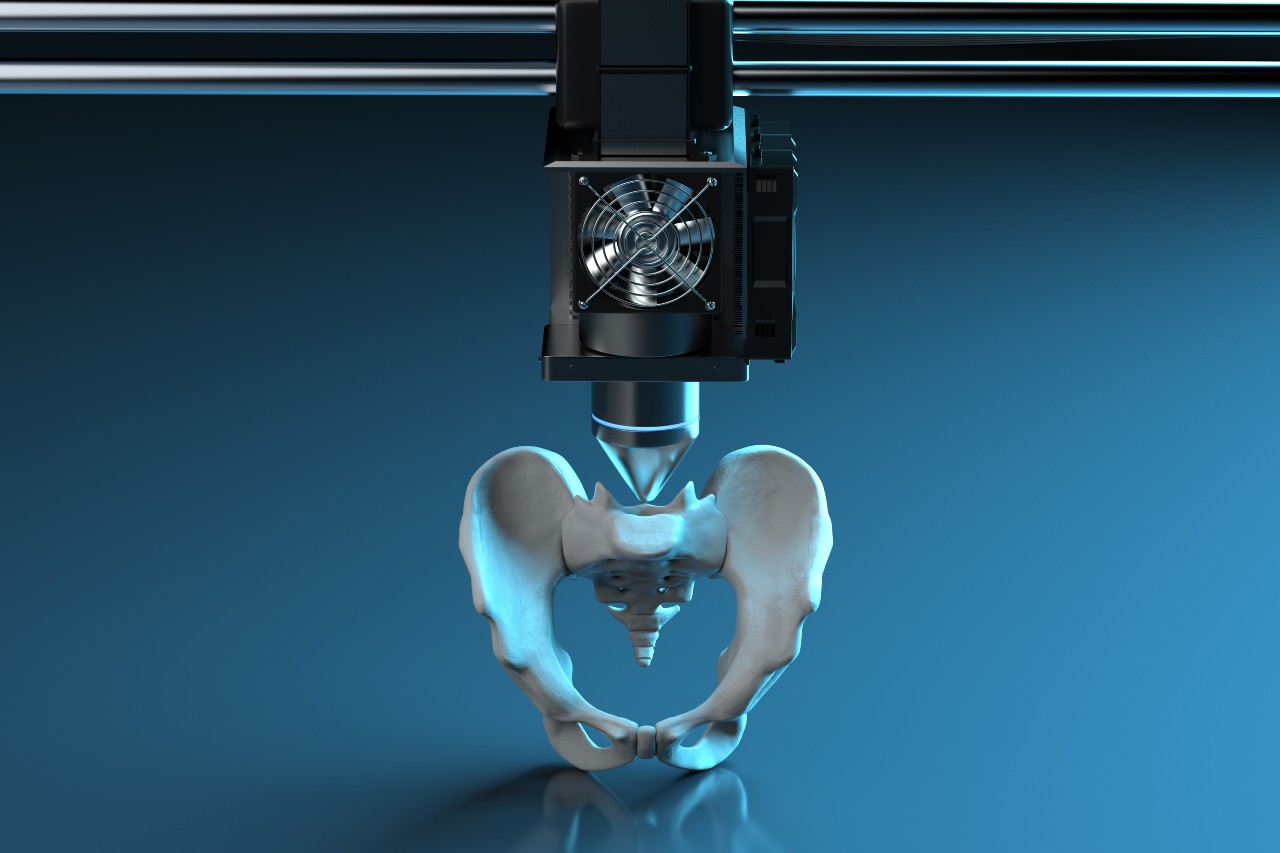 In the booming market for implanted devices, 3D printing is an increasingly popular fabrication method, but researchers are looking beyond its cost-efficiency and speed to see how it can help create implants that perform better inside the body. Atieh Moridi of Cornell University and Amit Bandyopadhyay of Washington State University tell Jim Banks how 3D printing is redefining biocompatibility.

In industries of all kinds, 3D printing has revolutionised many manufacturing processes by enabling faster fabrication and more intricate designs.

The medical sector is no exception, but it must consider a host of factors that other industries do not. Chief among these is biocompatibility.

Creating a device that performs safely and effectively inside the human body, be it a hip replacement or a pacemaker, means that both the design and the properties of the material must fit perfectly with the body’s internal biology.

There is no stopping the rise of 3D printing, so refining its capabilities for medical devices is a high priority.

“Back in 2001, we were talking about 3D printing porous metal coatings for implanted medical devices and people were telling us not to bother, because 3D printing would never achieve the required strength,” says Professor Amit Bandyopadhyay of the School of Mechanical and Materials Engineering at Washington State University. “Now, everyone is interested in it.”

In the US, the FDA approved 3D printing for medical devices back in 2013, and it is now used to manufacture more than 100,000 implanted devices each year.

The US implantable medical devices market was also estimated to be worth $73.9bn in 2018, according to one Transparency Market Research report, with orthopaedic implants the single largest category.

The market for active implantable medical devices, however – including neurological implants, cardiovascular implants and hearing implants – is set to grow in value to $20.73bn by 2025.

“For the most part, companies have copied the technology that already existed,” Bandyopadhyay adds.

“They are using 3D printing just for the ease of manufacturing. On-demand manufacturing is certainly one of its key benefits, but there has been little innovation in design or composition.”

That is all about to change, however, as novel techniques are emerging that will have a far-reaching impact on biocompatibility and performance.

Bandyopadhyay was heavily involved in a new study by researchers at Washington State University, the Mayo Clinic and Stanford University Medical Centre, which has shown the value of using 3D printing to identify new alloys that could greatly improve the performance of medical implants.

The metals most commonly used in implanted devices were developed for other industrial applications, notably in the aviation and automotive sectors.

They were not chosen for their biocompatibility. Stainless steel (SAE 316) is commonly used in fracture repair, titanium (Ti64) for load-bearing implants such as hip replacements, and cobalt-chrome alloys for applications requiring articulation, such as joints and dental implants.

“None of these were designed for medical use, so they are not tailored to bone biology, which can be different in people of different ages,” says Bandyopadhyay.

“The bone biology in a child may not be the same as in an elderly person who is more prone to osteoporosis. [But] biocompatibility has not been an issue because there were no options.”

In the knowledge that more than half of all commercial biomedical implants contain metal, Bandyopadhyay and his team decided to ask whether it was possible to improve biocompatibility by creating new alloys better suited to implantation in the body without the long lead-times usually required for spinal, dental and craniomaxillofacial devices.

The team used 3D-printing techniques to assess various alloys to see whether they could perform better than standard metal components with biocompatible coatings.

While coatings are effective to some degree, they do not always bond well with the base metal, which can result in failures and remedial surgeries.

“The solution today is to develop a coating rather than focusing on alloy chemistry,” Bandyopadhyay observes. “So, we did biology-based work to increase the biocompatibility of alloys rather than coatings.”

As Bandyopadhyay explains, the most biocompatible metal is tantalum, which forms a stable oxide layer that prevents an exchange of electrons, allowing it to recruit proteins and enabling osteoblast molecules to form.

Its lack of reactivity makes it highly suitable for use in the body, but it’s high melting point and density make it hard to work with, and it is very expensive in its pure form.

What the team discovered, however, was that adding a small amount of tantalum to titanium provided the same biocompatibility as pure tantalum, along with the load-bearing and corrosion-resistant qualities of titanium.

Combining 3D printing, which enables the fabrication of complex designs that can be customised to the needs of each patient, with the properties of new alloys could greatly improve the body’s acceptance of an implant.

“Though the alloy can be cast or forged, 3D printing is already used in device manufacturing, so it is the way forward,” says Bandyopadhyay. “We used laser-based processes because tantalum has such a high melting point.

It is hard to melt it, but it absorbs the laser, which enables us to melt and mix a small amount of tantalum powder as we do the 3D printing. Because we are using 3D printing, the processing can be done at the point of manufacture.”

The team’s paper is one of the first to examine the application of 3D printing to alloy design and, having come out in February 2020, the concepts it lays out are still very new. Medical device manufacturers and regulators will need time to absorb the opportunity that it presents.

“A tantalum-titanium alloy is very simple and 3D printing is already widely used, so we are looking at other applications,” says Bandyopadhyay. “We are now working on identifying infection-resistant alloys using 3D printing techniques. This is not a solution looking for a problem. It is the opposite.”

Elsewhere, researchers have been working to improve the 3D printing process itself. A team led by Atieh Moridi, assistant professor at Cornell University’s Sibley School of Mechanical and Aerospace Engineering, is revolutionising the printing of implants by doing it without heating metal to its melting point.

They achieve this by blasting powder particles together through a supersonic nozzle. The work of Moridi and her colleagues on solid-state additive manufacturing of porous Ti-6Al-4V by supersonic impact could yield huge advantages for the fabrication of functional metallic parts.

“The novelty of our work is that we modified the process to be able to print porous structures. By optimising the pore size and distribution, we were able to not only provide space for the surrounding bone to grow inside these pores, but also to tune the mechanical properties of the implant.”

Powder particles are loaded into a supersonic nozzle and a pressurised carrier gas accelerates them at high speed. Above a certain velocity, the particles adhere to each other as they hit the substrate.

By adjusting the geometry of the nozzle, which can both converge and diverge the particles, it is possible to accelerate the carrier gas and the particles, and achieve the large plastic deformation that is required for successful adhesion. Controlling powder impact velocity can produce porosity of up to 30%.

“I think the most unique aspect of cold spray is that it does not melt powders to deposit them,” Moridi notes. “Therefore, the properties of powders are retained after deposition.”

“We normally spend so much time and effort designing powders, and if those properties remain intact during processing, we know what properties we should expect in our parts.”

The high plastic deformation achieved by solid-state bonding allows the grain structure of the powder particles to be refined to create printed structures with higher strength.

“Processing materials at high temperatures results in the development of tensile residual stresses that are detrimental for fatigue performance,” says Moridi.

“In addition, unwanted reactions typically take place at high temperatures. These can alter the microstructure of the materials and, therefore, their properties.”

The team’s work has shown that cold-sprayed porous titanium alloy can achieve higher strength than a laser-printed alloy, with post-printing heat treatment able to further improve mechanical properties, and that the resulting material is biocompatible with preosteoblast cells.

“Controlling pore size and pore distribution can impact the ability of cells to migrate into the implant and make a biological fixation,” Moridi explains. “It becomes an art to control the cold-spray process to achieve a porous structure that provides a good scaffold for cells.”

The power of 3D printing in the search for biocompatibility

There are trade-offs to be made with any 3D-printing technique. The solid-state bonding process on which Moridi has been working produces implants with higher strength and better biocompatibility, but does not match the build rate of traditional techniques.

“There are technologies that have high build rates but can’t achieve high resolution,” she remarks. “So, it comes down to the size of the implant and the resolution of the internal features you want to have in the design.”

What is clear, however, is that the range of 3D-printing techniques is broadening and the implications for the improvement of implants is enormous.

“We are still at the early stages of printing biomedical implants, but the benefits that this new technology brings are enormous,” Moridi remarks.

“We can print patient-specific implants that ensure perfect anatomical fit or we can design the architecture of implants to match local mechanical properties of bone.

“More than biocompatibility, however, the design freedom in 3D printing has enabled developers to tailor properties of implants by engineering their structures as opposed to only their composition.”

Many may have doubted the power of 3D printing for implanted devices in the early days, but there is little doubt now that it is evolving into an ever more powerful tool in the search for biocompatibility.