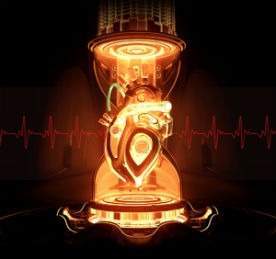 Perhaps the greatest limitation to the development of smaller medical devices, or smaller electronic devices entirely, is battery technology. The efficiency of batteries drops off considerably as they get smaller, and although scientists have succeeded in making longer-lasting batteries, generally by moving to lighter ingredients, the current favourite – lithium – is as light as it gets. There is nowhere else on the periodic table to go. Consequently, medical device developers have been doing all they can to find alternative sources of power.

A team of researchers from the Universities of Arizona and Illinois have made big strides in this area. In 2014, they developed tiny implants that could harvest the energy of the beating heart and transform it into enough mechanical energy to power devices such as pacemakers. The miniature device essentially consists of two thin strips that act as electrodes: one of titanium and platinum, the other of chromium and gold. These strips encase nanoribbons of piezoelectric polymers – materials that create a small electrical current when placed under mechanical pressure.

Professor John A Rogers, of the University of Illinois at Urbana-Champaign, was project leader, and here discusses the work leading up to the discovery, what has happened since, and how this can contribute to the body of knowledge around power management in medical devices.

Medical Device Developments: What made you decide to use the motion of the heart as the power source for the device?

Professor John A Rogers: We’ve had an interest in biointegrated electronic devices for a number of years – devices that integrate with the skin, the heart or the brain. One of the key factors is making the devices thin and flexible enough that they can intimately interface with those organs without constraining any of their natural processes. With that as your goal – to form a thin film-type laminate device – the challenge becomes how you power it.

Batteries don’t scale very well: as you make them smaller, their energy storage capacity decreases rapidly. It’s always been a challenge. We looked at a number of different approaches, some involving wireless power transfer, others for skin-mounted devices involving thin, flexible solar cells to capture ambient illumination. You can also do that for implants, where you use solar cells or photo receivers that operate in the part of the spectrum where body tissues have good transparency. But in that case, you need an external illumination source, which can get clumsy, and with wireless transfer techniques, as you go deeper in to the body, it’s harder to get significant amounts of power transfer.

You have to construct your mechanical energy-harvesting devices so they are only a very minor protonation on the heart itself.

So you are forced to think about how you are going to capture energy from natural body processes. For the heart, the obvious ideas are very small thermal gradients that might exist in the heart or surrounding tissue, or ways you might capture energy from blood flow. The most obvious one is motion.

How much power does the beating heart produce? Is it enough to power a pacemaker?

The heart’s always in motion and the amount of power associated with its beat is significant: 0.5-1W. For the kind of low-power electronics we are talking about, 1W would be a factor almost a million times more than you need. So there’s plenty of power just sitting there.

You can’t get away with harvesting any significant fraction of that power, though, because then you are putting a mechanical load on the heart and the heart doesn’t like it. If you’re using a device that is really mechanically coupling to the heart, in a way that captures a significant amount of power, it actually produces an arrhythmia. So you have to construct your mechanical energy-harvesting devices so they are only a very minor protonation on the heart itself. We found that you could reliably capture about a millionth of the power associated with the beating heart – a few microwatts – but a few microwatts is pretty close to being enough to power pacemakers.

How important was the choice of material?

Quite important, but in some ways it’s a system-level challenge. You have to identify the right type of material, embed it in an appropriate device structure, and integrate those elements into a whole flexible system that can be integrated with the targeted organ and understood at a biological level. We were able to exploit the highest-performance piezoelectric materials and we focused on trying to deploy that material in device architectures that make sense – not only in interaction with the biology, but also in terms of power generation and how you place the device on the heart. The angular orientation and the positioning of the device around the heart matters a lot, because the beating heart is a very complex motion. It captures energy from certain motions efficiently but not others.

Where are we on the road to commercial application?

There is a challenge here – an interesting one from a research standpoint, but one that sets a timescale on when this technology might be available for humans. The survivability requirements for pacemaker application are pretty daunting. You are talking about reliability of a quarter of a century and trying to get a device to operate reliably while completely immersed in warm saline solution, essentially, as is characteristic of the surrounding biofluids. Compounding the challenge is that the devices need to be very thin.

So the challenge really boils down to the question: how do you keep biofluids out? The devices are solid-state, which is a good thing because there are no moving parts to wear out. But water has a remarkable ability to penetrate through lots of kinds of material that you would ordinarily use in this context. Thin plastics don’t work – you wouldn’t think of plastic film as being water permeable, but on these timescales, water goes right through. It’s an interesting problem in material science. We are continuing with large-scale animal studies and trying to develop new barrier materials. There’s a lot of progress, but it’s not solved yet.

Multidisciplinary teams are increasingly common in medical device development. What are the benefits of working with such varied skill sets?

We all ultimately have an aspiration to build devices that have a positive impact on human health. If you are thinking at such a grand challenge level, by definition you are going to have to grapple with lots of different aspects of the problem, and it becomes an inherently multidisciplinary undertaking. We have moved forward in a highly collaborative mode where we’ve tried to exploit our core competency, which is around unusual electronic materials and devices. But if that is all you’re doing, the chance that you can have a real impact is minimal – maybe zero. You have to go not only from the materials and the devices but all the way to systems and biology interface. We typically work mainly with clinicians, because they understand pretty intimately what the unmet needs are and what the real challenges are in terms of clinical practice.

And computer science plays a greater role, too…

The relevance there comes back to this power-constrained environment and making the devices operate with minimal power. There’s a lot you can do in terms of local signal processing to help massively reduce power consumption. For example, with skin-mounted devices, think about the overall power budget: you have some power that goes into the operation of the sensors, some that goes into data storage, and some that’s needed to wirelessly transmit the data to an external receiver unit. A lot of the power is associated with that radio communications point. So, if you can figure out how to use data analytics on the device, you can avoid the need to transmit all the raw data and just transmit the data that’s meaningful to the physician. That way, you dramatically reduce the amount of data that needs to be transmitted and reduce the power budget, and it makes the energy harvesting much easier.

Your team is also involved in research into transient electronic devices that dissolve in the body. What is developing there?

We are continuing with large-scale animal studies and trying to develop new barrier materials. There’s a lot of progress, but it’s not solved yet.

We first laid out a strategy in our 2012 paper, and since then, we’ve looked at the entire set of materials we might be interested in, so our efforts are now focused on getting to that system level, developing devices that are addressing clinical needs.

We have about half a dozen projects ongoing in that space. The next one, which will soon be introduced, is a wireless sensor relevant for the treatment of traumatic brain injuries. Any time you have a wound you’re trying to treat or monitor, it’s an inherently transient scenario, because the device is only needed during that healing process. Leaving it behind is not normally an attractive option, because it leaves unnecessary device load on the patient, exposing them to risks. So what’s typically done is a secondary surgical procedure for extraction. In some cases, the risk associated with that procedure precludes the ability to use the device in the first place.

If you think about the biofluid barrier issue, the nice thing about transient devices is that the modes of operation in most of the applications we’re looking at have that wound-healing timescale. It’s not 25 years but three months, so the barrier issue is not terribly challenging at all. So, in a fortuitous way, we’ve sidestepped that challenge.