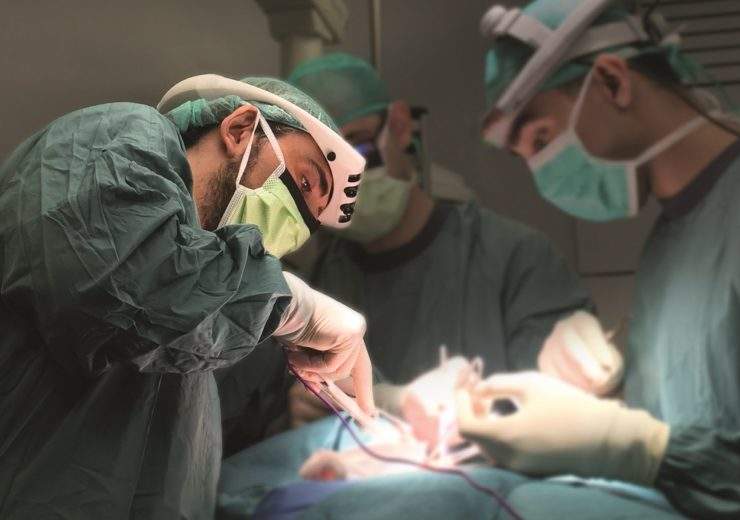 Medical students can now watch the finest details of real-life operations live in 3D as the world’s first wearable dual-camera headband for surgeons was created.

Dutch medtech firm Crescent Tech has developed the Crescent Vision wearable, which captures high-quality images from a first-person perspective and can be shared with viewers watching on a desktop, tablet, smartphone or with VR glasses.

The company, founded in 2017 by Samy Ralph Andary and Bartosz Zabłocki in Amsterdam as a spin-off from the Delft University of Technology, showcased its latest working prototype at the CES 2019 tech show in Las Vegas earlier this month.

Mr Andary told Compelo: “The need for healthcare professionals is growing increasingly, while simultaneously our medical educational system is not.

“This results in a huge deficit of not only healthcare professionals but more specifically surgeons.

“The short-term problem Crescent Vision is solving is the deficiency of surgeons in the world, while the long-term ambition is to rethink how healthcare is being provided altogether.

“We aim to leverage modern technology like wearables, computer vision and machine learning to make healthcare safer, cheaper and faster.”

What is Crescent Vision?

The Crescent Vision is a head-cam for surgeons set up with a dual camera capable of capturing video in stereoscopic 3D at full HD quality, and supported with binaural sound technology for immersive audio.

The lenses are interchangeable between three types of views and the device consists of high-power LED lights embedded next to the camera sensors for highlighting the area of a body in which the surgeon is operating on.

The entire system is powered by a 6,000 milli-Ampere-hours (mAh) lithium-ion battery that lasts between three and five hours

While the hardware start-up is currently in the development stage, the company has recently completed its fifth iteration of its prototype and plans to run several pilots in spring 2019.

Mr Andary said: “Our previous prototypes have been successfully tested and validated in laboratory, and simulated in real-world scenarios.

“In order to become fully marketable, we are focusing our efforts now on the user experience side to make it fully self-explanatory and usable without a manual.”

Problems that dual-camera headband  could solve in medical education

Mr Andary said the idea originated while writing a thesis for his engineering master’s degree at Delft University of Technology, and was encouraged to implement the idea as a product by surgeons.

He explained the current methods used by surgeons in operating rooms to record their perspectives is through standard video action cameras and smartphones.

Gathering observers around an operating table can be a challenge, particularly during highly detailed surgeries.

By having more trained surgeons working in hospitals, Mr Andary said the long-term impact of technology such as his dual-camera headband is lower medical costs and better patient outcomes.

Other potential medical uses being explored for dual-camera headband

While surgeons are the target market right now, Crescent Tech plans to explore tele-medicine and believes the technology could one day land on the heads of more healthcare professionals to give students an insight into how they work.

Hospitals such as the Mayo Clinic, an academic medical centre in Rochester, Minnesota, have reached out to Crescent Tech for potential collaborations after its exhibition at CES 2019.

Mr Andary added: “CES was a much bigger success than we imagined. A wide variety of interested healthcare providers and organisations have responded very well to our technology.