ContinueLearn More X
Home » Analysis » How do you like them grapples? – advances in robotic grippers

How do you like them grapples? – advances in robotic grippers

A soft robotic gripper invented at the École Polytechnique Fédérale Lausanne (EPFL), Switzerland, is gentle enough to pick up an egg or a single piece of paper, yet strong enough to carry 80 times its own weight. It demonstrates a promising new approach to robotic manipulation that could help machines take on more dexterous tasks, not least in the device production line. Sarah Williams speaks to EPFL’s Jun Shintake and Herbert Shea about the mechanics of the technology and what it could mean for the medical industry, from efficiencies in automated manufacture to advances in prostheses. 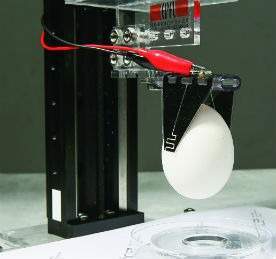 When the international space station reached out to capture Cygnus CRS-6/OA-6, the unmanned freighter sent to supply it with vital cargo in March 2016, it did so using a robotic arm. Known as Canadarm2, the multijointed motorised device worms its way around the exterior of the space station by locking onto specially designed grapple fixtures on the station’s surface. Similar fixtures on Cygnus – and other bespoke craft – allow the arm to take a secure hold.

Canadarm2 is just one example of a highly specialised ‘end effector’, the end-of-arm tooling that allows robots to carry out vital physical tasks. Among the supplies on board Cygnus CRS-6/OA-6 were the means to carry out further tests on another emerging effector technology.

As the name suggests, NASA’s Gecko Gripper is designed to mimic the tiny hairs that allow geckos to cling to walls and ceilings. Using van der Waals forces – the slight electrical charge that can create an attraction between molecules – the gripper adheres to objects and surfaces. Scientists hope the technology could one day grapple spinning and tumbling objects in space, and be used to help clear some of the thousands of pieces of debris in orbit that risk damaging spacecraft.

Back on earth, robotic grippers are widely used in automated processing and mass production, with growing applications in chemical, pharmaceutical and medical manufacturing. But while different grippers can cap bottles, handle medical samples or lift fragile semiconductor wafers, a gripper that is able to adapt swiftly between varied tasks remains largely elusive. When a production line changes, even small differentiations between the components being handled can mean a need to change or redesign the end effectors in use, costing time and money.

Now, researchers at École Polytechnique Fédérale de Lausanne (EPFL), Switzerland, funded by NCCR Robotics, have developed a soft robotic gripper able to grab onto fragile objects of widely differing shape without any prior knowledge. And while able to handle objects as delicate as an unboiled chicken egg, a thin water-filled balloon or a strawberry, it can also hold objects 80 times its own weight.

Made of rubber and flexible electrodes, the gripper has much in common with other soft-robotic gripping approaches such as the Each Pick manufactured by US-based electroadhesion specialist Grabit. What makes EPFL’s invention unique, however, is the way it marries electroadhesion with another technique: artificial muscle.

Behind that intriguing term is dielectric elastomer actuators (DEAs). Sandwiching a soft elastomer membrane between two electrodes, DEAs deform when a voltage is applied between the electrodes, causing a curling or shrinking movement.

For Jun Shintake, first author of the study published in Advanced Materials in early 2016, thinking about the dexterity of the human hand was a motivating factor in devising the gripper’s two-tiered approach.

“At the beginning, the softness of DEA – the artificial muscle technology we used for the gripper – inspired me to represent the soft skin of a human hand and its gentle grasping,” Shintake explains: “Since DEA is thin, like a film, I could also imagine the grasping of the gripper fitting to various objects as if wrapping them.”

Because the DEAs only generate a low holding force, the biggest challenge was achieving a strong enough grip to lift the objects.

“We thought to use electroadhesion – electrically controllable adhesion – to increase the force; then came the idea to reform normal DEA design to a completely new type of actuator that can generate a large holding force and gentle finger movements, as highlighted in the gripper.”

Each of the two electrode flaps that form the effective ‘thumb and forefinger’ of the gripper contains five layers – two external silicone layers, and then a pre-stretched elastomer sandwiched between two layers of electrode. With the voltage off, the flaps curl outwards, but as it is applied, the attraction between the two layers of electrodes causes the flaps to straighten and clasp at the desired object. Strengthening this weak grabbing motion are the interdigitated electrodes that create an electrostatic field, allowing electroadhesion to firmly grasp the object.

Shintake is the PhD student who first inspired EPFL’s project with his vision of using soft robotics to pick up the most delicate of objects: a raw egg yolk. While the ability to lift one unharmed remains an uncompleted dream (plus, they are really not the nicest thing to work with in the lab), the gripper’s ability to mould gently to the soft shapes of fragile objects suggests that it may not be too far from being realised. What’s more, it is this adaptability that allows the gripper to grab on to not only deformable objects like balloons, but also thin, flat objects such as a sheet of paper: tasks that other soft grippers have struggled to achieve.

According to Herbert Shea, EPFL professor and PhD co-supervisor on the project, while a more complex three or four-fingered structure might provide greater robustness, the simplicity of the thumb and index approach is compensated for by the extreme flexibility of the material.

“One of the highlights of the gripper is that – within the limits of how much it can bend – it will conform to whatever shape you have without needing to do any computation or anything other than just turning the voltage on,” Shea says. “If you have a conventional robotic finger with two mechanical fingers, it is trickier because you have to get them to bend just the right way and not squeeze too hard and break the egg or wrap around your device.

“Here, since the bending force is very small, it cannot crush anything but it has a good holding force, so even though it has just two fingers, it can pick up a wide range of objects.

Applied to an automated manufacturing context, Shea and Shintake’s gripper has the potential to greatly assist with medical device assembly and packaging. An end effector that can handle items as varied as miniature electronic components, panes of glass, or finished products – without needing to change or reprogramme the robotic hand in between – could offer production managers a new-found flexibility, cutting time and money during changeovers.

The cost of the device at purchase could also be a helpful driver.

Shea explains: “There are many beautiful, fantastic robotic hands with many degrees of freedom, but usually these need to work with a complex vision system [in order to see the targeted object], and they are very expensive. Here, since we are choosing relatively cheap silicones, you can imagine a much lower-cost solution.”

And while Shea acknowledges that advances in pneumatic grippers provide many of the same benefits in terms of complying to a variety of shapes, the simplicity of the EPFL device holds the potential at once to simplify the mechanics of automation systems and to allow much more complex production lines to be built around them.

“What we like about our gripper is the absence of any pumps,” Shea says. “So you just have a voltage supply that can be made very small, and you do not have to have a fluidic system in the background, which makes it easier in the long-term to have more complicated devices with more channels.”

What’s more, the mere mechanics of some grippers rule them out from the most sensitive of operating environments, with hydraulic grippers largely excluded from pharmaceutical environments, and many pneumatic grippers unsuitable for the cleanroom because of the flow of airborne particles they can generate.

But it is perhaps further into the future that the most evocative uses for the gripper are found.

Applied to a prosthetic arm, the gripper could potentially provide wearers with greater dexterity and control.

While the EPFL team are experts in soft robotic engineering rather than medical prostheses, it is a field in which they would be keen to see the gripper’s capabilities explored.

“As a prosthetic device, it could be very enabling,” Shea says. “It would require that people think about prosthetics a little differently and accept that it might not look like the original human function, but then you could indeed have a soft flexible device that is safe to touch other people, and to grab a computer mouse, a coffee cup or a telephone.

“Anything that we can pick up with our gripper, you could also imagine grabbing if you combine it with a suitable arm.”

Shea and Shintake hope, too, that the device can contribute to developments in wall-climbing robots and drone technology, for example, allowing a drone to perch mid-flight by hanging upside down from a lamppost like a bat.

And the department that Shea heads at EPFL responsible for these developments? LMTS: Microsystems for Space Technologies Lab. If you want to get a grip these days, it seems your best shot is to aim for the stars.