M&A activity in the medical equipment sector remained strong in Q2 2011 and deal values increased, driven by markets such as healthcare IT, reports GlobalData. 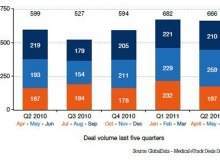 According to the report ‘Medical Equipment Quarterly Deals Analysis M&A and Investment Trends – Q2 2011’ from industry analyst GlobalData, M&As and asset transactions, which include change in ownership and control of companies or assets (GlobalData does not consider this value as a new investment in the market), reported an increase in deal values with two major transactions in the second quarter of 2011.

Some of the major acquisitions in Q2 2011 include Johnson & Johnson entering into an agreement to acquire Synthes for $21.3 billion in order to further diversify and strengthen its position in the trauma equipment market, and Takeda Pharmaceutical entering into an agreement to acquire Nycomed International Management for €9.6 billion ($13.7 billion) in order to enhance its development expertise and commercialisation capability in Europe and emerging markets.

"Although global economic uncertainties continue to pose risks, healthy balance sheets for most of the major medical device companies provide them with enough resources for acquisitions."

The healthcare IT market continued its deal-making momentum with 36 deals worth $1.5 billion in Q2 2011. The market was driven by factors such as the launch and rapid adoption of IT solutions by providers, the considerable shift of focus to clinical outcomes and pay-per-performance models, and substantial vendor consolidation activity to improve market position in a dynamic but overcrowded market.

"M&A activity is expected to continue to remain strong, driven by markets such as healthcare IT," explains GlobalData analyst Bhaskar Vittal. "Although global economic uncertainties continue to pose risks, healthy balance sheets for most of the major medical device companies provide them with enough resources for acquisitions.

"With growth becoming challenging for some of the major markets such as cardiovascular and orthopaedic devices and diagnostic imaging equipment, we expect companies to continue to focus on inorganic growth strategy. Also, M&As provide opportunities for companies to fill gaps in their product portfolio."

Global equity offerings, including initial public offerings (IPO), secondary offerings and private investment in public equities (PIPEs), reported a marginal decline in the number of deals with 78 in Q2 2011, compared with 79 in Q1 2011.

Debt offerings, including secondary offerings and private debt placements, recorded a decrease in deal activity in Q2 2011 with 32 deals worth $12.4 billion, compared with 39 deals worth $15.5 billion in Q1 2011, reflecting a decline of 17% in the number of deals and 20% in deal value.

Investment in the venture capital market

Delphi Ventures topped the list of venture financing firms by participating in ten deals with a total deal value of $331.1 million during the last four quarters (Q3 2010-Q2 2011).

"Companies with innovative products and those catering to significant unmet needs will continue to attract investments as growth becomes a challenge for major medical equipment markets."

The private equity market recorded a decrease in the number of deals and a significant increase in deal values in Q2 2011 with 19 deals worth $4.1 billion, compared with 20 deals worth $951.6 million in Q1 2011.

According to Vittal: "Companies with innovative products and those catering to significant unmet needs will continue to attract investments as growth becomes a challenge for major medical equipment markets. There has also been an increasing trend of major medical device companies investing in start-ups, which has boosted the confidence of venture capitalists."

Improved deal-making in the US

Asia-Pacific registered a decline in the number of deals, with 75 in Q2 2011 compared with 87 in Q1 2011. Deal values in the region increased to $942.7 million in Q2 2011 from $669.3 million in Q1 2011, with the medical device companies in the region enhancing their investments as a result of economic growth, government funding and reforms, and changing consumer lifestyles.

"The deals activity is expected to remain strong in both North America and Europe," says Vittal. "The Asia-Pacific region may witness an increase in the number of deals as major companies continue to establish their presence in the face of economic growth and a significant population."

The information in this article was taken from the GlobalData report ‘Medical Equipment Quarterly Deals Analysis M&A and Investment Trends – Q2 2011’. It provides detailed information on mergers and acquisitions, equity/debt offerings, private equity, venture financing and partnership transactions registered in the medical equipment industry in Q2 2011. The data presented in this report is derived from GlobalData’s proprietary in-house Medical eTrack deals database and primary and secondary research. To purchase this report and additional research, visit www.medicaletrack.com.