The rapid proliferation of internet-of-things technology means that devices are now more connected than ever. Momentum is gathering towards embedded wireless connectivity, and manufacturers are embracing this digitalisation. With a new internet-connected inhaler to treat chronic obstructive pulmonary disease set to be released by Novartis and Qualcomm in the near future, we speak to Mark Levick and Rick Valencia about what the prospect of ‘digital prescriptions’ could mean for device developers. 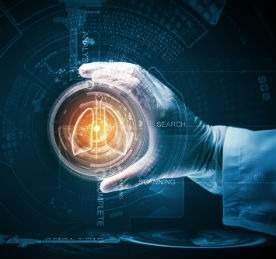 Chronic obstructive pulmonary disease, or COPD as it’s more widely known, is a real killer. An umbrella term for a range of conditions caused by long-term poor airflow into the lungs, its most common presentations, bronchitis and emphysema, can usually be avoided by reducing exposure to risk factors like smoking, and seeking treatment for allergies and asthma.

But it’s not always that simple. "It’s very insidious," explains Novartis’s global head of development for respiratory products, Mark Levick, "and because of smoking, air pollution and things like that, the rates are increasing, and this is a worldwide phenomenon. People get so worried about it because it’s obviously a cause of death, and the number of deaths from chronic obstructive airway diseases is expected to increase."

For those who develop it, and clinicians estimate that 5% of us will at some point, the road to treatment is a slow and painful one. There’s also no cure, caused as it is by damage to the lung, and until it’s possible to repair lungs with stem cells, the best approach is a slowing of symptoms and careful rehabilitation. For now, COPD is treated with bronchodilators – inhalers – to ease breathing and relax the lung muscles, as well as to administer a number of drugs, from ipratropium to tiotropium.

Traditionally, these treatments have been hard to monitor, and making sure patients take the dosages on time and that the drugs are having an effect is a challenge: not everyone responds well to certain COPD medications and recovery can be slow. But Novartis, in collaboration with subsidiary Qualcomm, is attempting to rectify these problems with the next-generation eBreezhaler device, an internet-connected inhaler that will, in essence, move the treatment of COPD into the digital space.

If you look at interventions to improve adherence, no one thing is going to be the silver bullet. You have to have education, understanding your disease.

"Novartis supports patients being empowered to make it easier for them to manage their chronic conditions," head of Novartis Pharmaceuticals David Epstein said in a press release when the announcement was made. "By enabling near-real-time data capture from the patient and the connected eBreezhaler device, patients can monitor their own adherence to the medication they take, which is vital to their health outcomes."

The original, non-connected, Breezhaler is already a well-established product, administering a LABA/LAMA combined treatment for COPD, but the new inhaler, set for release in 2019, adds an entirely new technical dimension to the product.

"Actually, if you looked at both devices, you wouldn’t be able to tell the difference unless you looked really closely to see through the plastic to the electronics we’ve designed in it," says Qualcomm senior vice-president and general manager Rick Valencia. "It’s an existing drug, an existing device, that just now has the radio and electronics in it."

Patient compliance is always a critical part of treatment, but no more so than when a patient is being treated for COPD: it’s estimated that one of the main causes of episodes and hospital visits is a failure to properly follow dose recommendations.

"The objective is primarily to help patients stay compliant with their prescribed regimen of taking their drugs to keep them well," says Valencia. "What I like about this is that it’s kind of a win-win proposition: a compliant patient stays well, and a patient who’s well doesn’t end up in the hospital, costing the system money. Also, generally, a compliant patient is one who’s taking more medication, not less, so it’s good for the pharma as well. We know that people with airway disease who are taking inhaled base products aren’t that adherent to medicine."

There are numerous reasons for this: popping pills is bad enough, but when patients who may be extremely unwell have to prepare the device, position it correctly, then use it properly and follow correct breathing patterns, it makes sense that rates of non-adherence can be as high as 60%.

"The eBreezhaler fits in because it’s a way of helping people and reminding them to take their medicine," says Novartis’s Levick. "It’s about really making sure people take their medicine and get their drugs on board, stopping exacerbations, and hoping to reduce overall mortality and morbidity."

So how does it work on a day-to-day basis? If a person is using a digitally enabled device, they’ll normally have a window of time in which they usually take their medication. If they miss it, a reminder on their smartphone can let them know; it’s a simple part of a multidimensional strategy to improve adherence.

"If you look at interventions to improve adherence, no one thing is going to be the silver bullet," says Levick. "You have to have education, understanding your disease. You can monitor yourself so you understand the importance of your symptoms and you can determine if they’re getting worse from day to day."

Qualcomm’s role comes in designing the electronics for the device, integrating Bluetooth into the inhaler so that, when the drug is taken, a message is sent to an app that comes with the medication. Ultimately, the objective is to create a complete solution that can be prescribed as a whole to a patient, through which the doctor can communicate with the patient about the progress of treatment.

"It’s a two-way communications platform," says Valencia. "The patient can talk to the doctor about how they’re dealing with their condition and how they’re doing staying compliant."

Radio isn’t the only electronic component Qualcomm is working on integrating. The inhaler has been specially designed so that it can determine the volume of the drug taken based on the way the patient pushed the device, the angle to make sure it’s being taken right, and the temperature of the drug and the air in the room around them.

"All these things help to better inform their caregiver on how and when the patient ought to be taking the drug," says Valencia.

It’s easy to imagine the impact these types of products are going to have on the day-to-day work of clinicians treating patients with COPD. With the real-time data about how patients are taking their doses, doctors can determine, in a much more substantive way, how compliant they’re being and the status of their symptoms.

"It gives a lot more control of their own disease back to the patient, because then they have an insight into how they’re managing it," says Levick. "It gives the healthcare professional the ability to make more considered decisions – not necessarily lurching to change treatments but actually working on how to get it optimised."

But with all this data in the cloud comes the need to manage it and keep it safe, and, as this develops over the next ten years, integration will be critical for clinicians and other healthcare professionals to keep track of it all. As yet, details on how exactly this will work are thin on the ground.

"We think that the integrity of the data, the privacy of the data, is absolutely critical," says Levick. "If people have doubts about that, it may affect their willingness to use the system. It’s really important. We already know that patients are very concerned about not only how their information is being used, but who holds their data and what happens to it as well."

Pay as you go

With the world of pharmaceutical delivery changing so rapidly, these kinds of drugs are going to become indispensable. As the shift towards outcomes-based payments to sell medications develops, argues Valencia, the ability to track the progress of treatments in a more patient-centric way will be a major asset.

It gives a lot more control of their own disease back to the patient, because then they have an insight into how they’re managing it.

"How do you prove that? You get data about how the patient is using the drug," he says. "You’re going to have to prove that your drug or your health solution generates a better outcome than the alternatives in order to sell your product."

In the long run this could even affect healthcare costs and insurance premiums, a critical issue in the US, where patients may find themselves being charged large sums for treatments that might not even be working. Valencia says that Qualcomm is already working on what it calls "clear" trials with insurance companies, where the higher levels of compliance created by these new kinds of products mean better rates for customers. He also points to a collaboration with United Health based around motion.

"If you’re insured on this programme and you’re active throughout the day, not just walking 10,000 steps but you have to exercise very vigorously for 30 minutes a day, if you do all of that, you earn $4 a day towards your healthcare costs – $1,500 a year," he says. "The reason they’re offering that programme is, of course, because they have developed confidence that if a person is active in this way, they’re going to stay in better health."

Qualcomm is working with a number of pharmaceutical companies on everything from inhalers and injectables to pills and transthermal patches that can be optimised in these fascinating ways, and this transition has the capacity not only to optimise drug delivery, but also to take diagnostic data or biometric readings at the same time.

"Imagine a patient is taking a specific type of drug, and it’s important to determine how people are responding to that drug in a fairly real-time basis," says Valencia. "The patient takes the drug, and it’s connected – they might have a patch on them of some sort that’s taking vital-signs readings – then they’re pairing those together and sending that data."

"Our expectation is that most drugs that are really important to keep a patient with a serious chronic condition well, and/or our really expensive medications, you’re likely to see that, in five years from now, the prescription will be the drug, the electronics and the app all coming together as one."

Big pharma is increasingly seeing the possibilities of integrating technology into the devices used to treat these kinds of serious illnesses, and Novartis’s work with Qualcomm is just the tip of the iceberg – the next ten years could see everything from cancer treatment to antibiotics integrated with digital platforms.

Development is a long and complex process, however, and while the eBreezhaler is an adaptation of an existing product, there’s a lot of work to be done before it hits the market. It’ll be fascinating to see what follows.