Advances in 3D printing and other machining techniques are making medical robots rapidly more affordable and easier to manufacture. Professor Guang-Zhong Yang, director of the newly opened EPSRC micromachining facility at Imperial College, talks to Greg Noone about how such technology is set to revolutionise medicine in the years ahead. 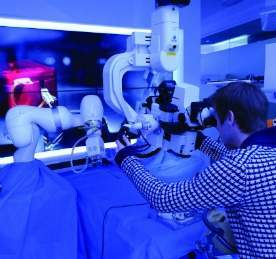 In an era in which the effectiveness of new surgical techniques is increasingly judged by how minimally invasive they are, the potential of robotic assistance during operations has never been more closely examined. Such appeal lies in the proven ability of these machines to accomplish delicate tasks with much greater accuracy than the human hand, in ways that successfully limit the need for exploratory surgery. This increasing preference for keyhole surgery in certain procedures ultimately serves to minimise scarring and long-term risk for patients.

This interest is fed in turn by a developmental renaissance in the field of medical robotics. At Vanderbilt University’s ‘STORM’ lab, in Nashville, US, for example, scientists have pioneered the use of targeted magnetism in laparoscopic surgery, placing two small devices above and below the abdominal wall to move the liver out of the way of the gall bladder before an operation on the latter. The first steerable needles are also being developed to enable precise incisions to facilitate the removal of blood clots within the brain and tumours from the pituitary gland. And, in March, Google decided to enter the market by buying up Johnson & Johnson’s subsidiary robotics unit Ethicon, with the implicit intention of building the next generation of surgical aids for doctors.

However, a significant stumbling block remains on the road to the widespread adoption of robotic medical devices: the rate of production. While they save lives, such machines are highly expensive and very hard to source.

"Our printers can be running day and night. That way, anyone who wants a machine with certain specifications is able to order it on Monday and have it done for Tuesday."

"Having 3D printers on campus operated by a dedicated team of researchers means that ideas for devices or clinical instruments can be assessed and assembled very quickly," says Yang.

"If required, our printers can be running day and night. That way, anyone who wants a machine with certain specifications is able to order it on Monday and have it waiting for them on Tuesday."

Rapid prototyping technology has enjoyed its fair share of hype. Originally invented in 1981, it is only recently that the public imagination has embraced the potential of 3D printing to swiftly create items hitherto limited to the shop shelves.

Until now, this has resulted in little more than a lot of hot air and a couple of plastic figurines, but while the public love affair has remained fitful at best, the medical community has seized on the technology to experiment with 3D-printed instruments that drastically simplify operations and quicken recovery periods. Now, by bringing the production of items such as prostheses, stents and back braces in-house, the medium promises to save doctors time and money in ways that were previously considered impossible.

The potential for helping surgeons reduce the time they spend waiting for lifesaving equipment gets to the very heart of why Yang first entered the field of medical robotics.

"All my work since my PhD has been related to healthcare, in particular around medical imaging, sensing and robotics," he says. "I’m an engineer, but what drives me is making safe and accessible devices that demonstrably improve people’s lives."

Imperial’s printers are a far cry from the miniaturised versions you can buy from your local electronics retailer and use at home. The EnvisionTEC ULTRA 3SP, for example, has the ability to print at a 50µm resolution, while the Nanoscribe Professional GT trades in printing on the nanometre scale to render high-resolution objects, photo masks and other products.

"The range of robots we produce at the facility have applications ranging from GI and keyhole surgery to single-port procedures," Yang says. "Common among all of them is their capability in minimally invasive surgery. The use of such devices is becoming increasingly essential in neuro, cardiac, paediatric, and orthopaedic surgery, areas in which the levels of accuracy on the part of human surgeons have to be immeasurably greater to ensure the successful recovery of the patients."

That’s increasingly being enhanced by the development of new substances for use in the rapid prototyping itself.

"I’m an engineer, but what really drives me is the possibility of making safe and accessible devices that demonstrably improve people’s lives."

"We’re particularly excited about this, as many of the materials we’ve printed with in the past tend not to last," adds Yang. "They’re not structural, or functional, in ways you might desire for rapid prototyping. Stronger, more durable biocompatible materials are being developed, so we can begin to think about larger-scale production.

"This would drive many high-value manufacturing applications, particularly in medicine. As the applications of the technology begin to generalise, we can also think of producing devices that cater for a much wider patient community, like wearables."

Professor Yang’s work at the facility is not just confined to streamlining the means of production. He also heads the EPSRC UK Robotics Autonomous Systems Network, comprised of eight robotics centres across the country upon which Imperial’s micromachining facility can draw upon, as well as contribute to, a pool of capital and expertise.

"The network allows us to have a much better view of practical and theoretical developments across the sector," says Yang. "It brings a lot of external exposure and facilitates collaborations that wouldn’t otherwise be possible. It’s unique vehicle to demonstrate the UK’s capability and strength in robotics."

Yang feels that this model of collaboration between research centres will define the future of medical robotics.

"We’re already organising training and research exchanges, regular training workshops and design competitions to allow new staff and students to become fully acquainted with our research methods and the capabilities of our machines," he says. "With the instruments at our disposal and the pooling of so much talent, we have the chance to attain a wider uptake in the number of postgraduate and PhD students we teach."

Indeed, as the field of medical robotics continues to yield stunning advances in miniaturisation and imaging technology, it’s increasingly up to micromachining facilities like the Hamlyn Centre’s to lead the way in getting the latest designs off the drawing board and into operating theatres.

Opened last November, the £4-million mini-factory is expected to be a national UK hub for industry and academia for developing miniaturised surgical robotics to improve the diagnosis of disease and drug therapies for patients.

Researchers will take advantage of advances in rapid prototyping technologies, microfabrication and micromachining processes, along with the development of advanced materials to build cutting-edge surgical tools and smart implants that can deliver targeted therapies with microinstruments that also have integrated sensing and imaging technology.