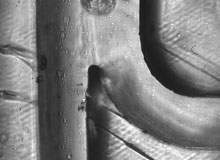 A new technological approach based on the strategic application of ultrasonic waves has been developed to isolate and extract circulating tumour cells from peripheral blood samples flowing through a micro-device.

This non-invasive technique can be used as an early detection system to identify metastasis in the initial stages and has been developed by four Spanish teams, coordinated by the Spanish National Research Council (CSIC).

The analysis of samples taken by biopsy is still the best way to examine a tumour, but it has difficulties in its application in the early stages of tumour growth.

Recent studies have identified both the prognostic and predictive utility of determining the number of circulating tumour cells (CTC) in patients with solid cancers.

Changes in CTC numbers during follow-up might predict tumour relapse1. Further evaluation of CTC prognostic and predictive values in patients with early CTC is warranted.

The new technique is based on the action of a radiation force and does not require the introduction of any external element in the sample, allowing the recovery of intact cells for later biomolecular analysis. The radiation force exerted by the ultrasonic wave causes the tumour cells, which are distinguished from the rest by their size and density, to be conducted up to that point and then extracted.

There are no precedents of the ultrasonic technology applied as a detection method to isolate CTCs from peripheral blood before this development, which was presented at USWNet Congress 2010 in Groningen, the Netherlands, and Lab-on-a-Chip World Congress 2010 in San Diego, US.

"Strategic application of ultrasonic waves can isolate and extract circulating tumour cells from peripheral blood samples flowing through a micro-device."

The device is a lab-on-a-chip that includes a plastic chip smaller than a €1 coin containing a channel of treatment and one ultrasonic actuator attached to one of its outer lateral edges. This is parallel to the channel along which a sample flows together with a collector fluid, free of particles, where the target cells will be collected for their extraction later.

The use of parallel flows in combination with the ultrasound actuation perpendicular to them allows selective separation and extraction of subpopulations of the cells flowing in blood samples within the channel2.

The device is a lab-on-a-chip that comprises a technological novelty since it uses a polymer as its constitutive material as opposed to the more rigid materials used in conventional devices for ultrasonic micromanipulation. Most of the technological approaches developed in this way work with cavities acting as single half-wavelength resonators (with the formation of a single band of collected particles at the centre of the cavity)3-11.

They are mostly built up on silicon, metal or glass substrates because the rigidity of the channel walls with high impedance is determinant.

The use of any of these rigid materials to fabricate the chip is habitual because the resonance can be easily excited, even with a poorly coupled ultrasonic actuator. Unlike them, the working principle of the current device is based on the establishment of a standing wave across its width, including the chip with the channel and the piezoelectric actuator, where the difference of acoustic impedance between the consecutive layers is not a priority to achieve the establishment of the standing wave. In this way, the rigidity of the channel walls is not a requirement and allows soft materials of low acoustic impedance. Therefore, it presents the advantage of using low-cost plastics.

The device behaves as a multilayer system resonating at frequencies close to 1MHz. A strategic combination of the widths of the layers (taking into account their relationship with the acoustic wavelength) allows the establishment of a node of pressure inside the channel at a desired location. The channel is connected to two inlets and two outlets. In it, two different media flow in parallel paths in laminar regime: a suspension containing the particles of interest (blood sample with CTCs) to be extracted and a ‘collector fluid’ (10% dilution of PBS in deionised water), in whose flow path a node of pressure allows the acoustic collection of CTCs outside the blood flow path.

Due to the small Reynolds number (Re) of the microfluidic channel, the flow of the fluids remains laminar. Once collected there, the cells continue flowing until the end of the channel separates from the blood sample, leaving it through a different outlet.

During the application of the ultrasounds a steady radiation force is generated in the channel to act on each single cell / particle in suspension through the fluid phase, driving them toward the location of acoustic equilibrium. This acoustically induced drift motion depends on some cell parameters involved in the expression of the radiation force, such as the cell volume or the acoustic contrast factor, which relates densities and adiabatic compressibility of cells and host fluid.

Therefore, the variation of any of these parameters gives the cells different acoustic behaviours because the radiation force induces differentiated motions on distinct types of cells. Attending to it, epithelial tumour cells larger than hematopoietic cells are more susceptible to the ultrasound and require lower levels of acoustic energy than leukocytes to be driven toward the node of pressure.

In this way, the device exploits the difference of size, density and/or compressibility between different cells to perform a selective isolation of the target elements, and through this the complete extraction of tumour cells by ultrasounds can be achieved.

Unlike conventional technologies based on a MACs (immunomagnetic cell sorting) or FACs (fluorescence-activated cell sorting) system, the ultrasonic technology bases its actuation only on mechanical forces acoustically exerted on each single cell through the fluid (plasma) in which they are immersed flowing through the channel length. It is a non-invasive method that doesn’t require the introduction of any external nano or micro element into the sample to trap or tag the CTCs and keeps the cell viability for later biomolecular analysis to find the cancer biomarkers once extracted and delivered.

As it acts on each single element, the cell concentration shouldn’t be a factor in the efficiency of separation. The feasibility of the CTCs extraction from blood samples by ultrasounds has been tested on the device at a frequency of 1MHz, achieving an efficiency of up to 70% for a channel length of 6mm at stable hydrodynamic flow conditions (flow rate of 20µL/ min). At the present conditions mentioned above the device needs 4.16h to pass a 5ml blood sample.

"The device uses a polymer as its constitutive material, as opposed to the more rigid materials used in conventional devices."

For the sample preparation, known numbers of tumour cells from PANC-1 cell line of pancreatic origin were added to 5ml of peripheral blood from a healthy donor to be treated by ultrasounds within the channel of the micro-device.

The blood sample containing tumour cells flows in parallel with PBS 10%-diluted in distilled water along the channel during the acoustic treatment. At a frequency of 1,023kHz a node of pressure is established inside the channel close to the left sidewall, where larger cells collect.

Some results are presented in the filmed frames of Figure 1, which shows filmed CTCs flowing along the pressure node inside the channel (close to the left sidewall) under the ultrasounds to leave the device through the lower outlet, separated from the host blood sample flowing out through the right outlet at higher speed. In this flowing path, leucocytes appear as longer traces instead of their circular shapes.

Optimal conditions to maximise the extraction efficiency of the chip up to 95±5% are currently being defined. In this sense, the device is still under development to adapt it for large-scale clinical use.

Their results are being compared with the complex system of counting and with conventional cell analysis that combines flow cytometry with fluorescence microscopy (ImageStream, AMnis) developed by Veridex as a control and validation technique. Here, cell counts are being used to alter the acoustic treatments and, in some cases, the viability studies of the cells are also analysed (in order to study the cell proliferation in cell culture).

In this period of technological optimisation, some hydrodynamic issues associated with the microfluidic connections of the injected samples are also being overcome. There are still frequent difficulties concerning the ingress of microbubbles in the outer ducts carrying the separated samples after the acoustic treatment toward the device’s external collectors, affecting the collection of the acoustically extracted cells.

"Using plastic allows for low manufacture and fabrication costs, generating a cheap technology for detection and count of CTCs."

The ultrasonic technique provides advantages and benefits for the CTCs separation: it’s a non-invasive method that doesn’t require the introduction of any external nanoelement; it delivers the cells fully viable for later biomolecular analyses; its effectiveness is independent of the cell concentration due to the radiation force acting on each single cell; and it provides a technological advantage associated with the use of plastic as a constitutive material, allowing for cheap manufacture and fabrication costs to generate a cheap technology for CTCs detection and count.

This work is carried out within the framework of a national research project developed by CSIC, in collaboration with the Technologic Center of the Basque Country (Ikerlan), the Fundación Hospital Universitario de Elche and Universidad Politécnica de Mondragón, with the participation of Professor A Carrato, chief of the department of oncology at the Hospital Ramón y Cajal de Madrid.