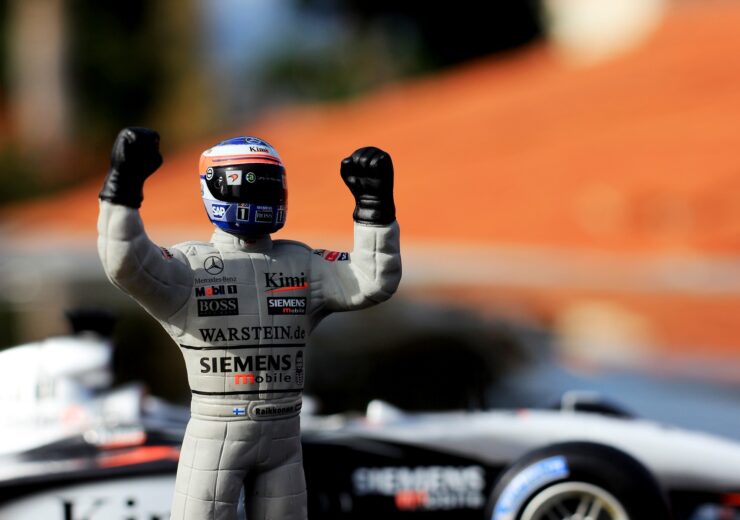 Mercedes was one of several UK-based Formula One teams that stepped up and attempted to alleviate widespread ventilators shortages (Credit: Ernesto Rodriguez/Pixabay)

The UK’s Formula One (F1) teams played a vital role in addressing the country’s ventilator shortage in the wake of the Covid-19 outbreak, but what was it about their approach to engineering that allowed some of them to succeed where other non-specialist manufacturers failed? Medical Device Developments writer Tim Gunn speaks to Chris Hurlstone, director of engineering for Team Consulting, about the value of high-speed techniques like rapid prototyping and adopting a ‘design sprint’ methodology for the industry at large.

In the first months of 2020, when F1 teams were better known for their cars than their breathing aids, ‘Mercedes technical collaboration’ might have been the most controversial phrase in motor sport.

Back then, before anyone was contemplating postponing the upcoming season, mid-tier team Racing Point, which sources gearboxes, power units and suspension components from Mercedes, was recording unwontedly fast test laps in a car that looked completely different from its last, and suspiciously like its supplier’s 2019 world champion.

“One can say without exaggeration that it is a 2019 Mercedes in pink,” sniffed Michael Schmidt, editor of Germany’s Auto Motor und Sport magazine.

Racing Point insisted that it received no technical or design information from its suppliers, but didn’t deny the charge of copying.

Rather, technical director Andrew Green emphasised his pride in how effectively his staff had done so from pictures alone.

“We’ve used what we can see,” he explained at pre-season testing. “There’s other teams taking pictures. There’s a pit lane full of photographers employed by the teams to take pictures of other peoples’ teams. All we did was use that information.”

Nevertheless, elsewhere on the grid, Andreas Seidl, team principal for McLaren, which finished fourth in the 2019 championship – three places ahead of Racing Point – called for tighter restrictions on working relationships between teams.

As his driver Carlos Sainz put it bitterly, “It makes life difficult for us if small teams can benefit from the work of the big ones.”

Things change quickly in a pandemic. Just before the season-opening Melbourne Grand Prix, McLaren announced that an employee had tested positive for Covid-19.

Within days, the F1 championship was suspended and the seven UK-based teams, which include Mercedes, Racing Point and McClaren alongside Williams, Red Bull, Haas and Renault, were pooling their resources and expertise in support of VentilatorChallengeUK.

Not that car designers are particularly adept at treating upper respiratory diseases: what F1 teams know how to do is copy what works, and copy it fast.

Indeed, F1 engineering happens largely in the two-week gaps between races, when the ability to quickly duplicate or iterate on features introduced by competitors without compromising a car’s overall performance can separate the podium from the back of the pack.

Improvements in ventilator design are similarly iterative, but they typically happen over five-to-six-year-long development cycles.

With the country staring down an apparent shortfall of approximately 30,000 breathing machines, VentilatorChallengeUK was set up to harness expertise from different areas of UK manufacturing to rapidly clone and scale-up production of the life-saving devices already certified by the MHRA (Medicines and Healthcare products Regulatory Agency).

Incredibly, the techniques Racing Point had used to gain a few seconds on a track in February had become the best hope for saving tens of thousands of lives in March.

As such, Mercedes’ next technical collaboration, with University College London (UCL), was a reversal in more ways than one.

Though separate from VentilatorChallengeUK, they modelled its approach, taking apart an off-patent continuous positive airway pressure (CPAP) machine to design, test and gain regulatory approval for a new, rapidly manufacturable product in under 10 days.

As Racing Point would be quick to point out, Mercedes and UCL had the advantage of direct access to the product they were cloning.

Moreover, unlike machines built to shoot from 0–60mph in two-and-a-half seconds, the Respironics Whisperflow has no moving parts, which meant that it could be reverse-engineered by exactly measuring each of its dimensions and translating them into a 3D CAD (computer-aided design) model and manufacturing drawings.

It’s the same technique Williams Advanced Engineering – an offshoot of the F1 team set up to support other industries with its technology – employed to accelerate production of Smiths Medical’s portable paraPAC Plus ventilator.

Remote staff took Smith’s 2D designs and reverse-engineered a unit to produce 3D CAD files for every component, which were distributed through the challenge consortium’s supply chains to source the requisite parts and scale up production across numerous high-volume assembly lines.

Williams also built two prototype units from its designs, which were assessed and validated by Smiths as meeting the original product’s quality requirements.

The team has since helped to tool the new production lines, as well as using techniques developed for F1 to set up a scalable testing process for their outputs.

Covid-19 may have focused attention on them, but the rapid prototyping and manufacturing techniques F1 teams adapted to support the UK’s ventilator drive were already growing increasingly relevant to the medical device sector.

In recent years, as 3D printers have become more accurate, and injection moulding tools become quicker and cheaper to produce, they have enabled OEMs to quickly and affordably test and iterate on designs in the very earliest stages of development.

For him, the approaches allow developers to get into far more detail with a range of different concepts in the proof-of-principle phase of design.

In the context of the normal development cycle, he calls it a vital “de-risking” opportunity.

“Once you start production work with your commercial manufacturing partners, who need robust systems for change management and manufacturing controls, it can be quite difficult to move quickly,” he explains.

“Whereas, if you’re working before you get into that phase, you can find possible errors or weaknesses, and quickly go back to fix them and try again.

“You iterate, iterate, iterate until you’re confident and then you get into the real rigour of manufacturing, industrialising and proving that you can make these things robustly, and through capable processes.”

It’s an extreme example, but in Mercedes’ case, the combination of reverse engineering and rapid prototyping proved an exceptionally efficient way of de-risking the CPAP manufacturing process.

Within a month of the project’s inception, the government target of 10,000 devices had already been met. Mercedes itself had repurposed 40 machines ordinarily used to manufacture pistons and turbochargers to produce 1,000 breathing aids each day.

As part of the effort, rapid prototyping specialists Protolabs were asked to develop injection-mould tooling for the bracket that holds the CPAP machines next to patients’ beds and a cap to prevent air escaping from the units. It did so in three days.

“Within a few hours of the call, we had mobilised a dedicated design and manufacturing team to review the bracket’s design for manufacturability,” said Protolabs’ strategic account manager Baninder Kaur.

“This led to four quick iterations and the decision to make the bracket using two tools, allowing us to reduce lead times by running production simultaneously.

“There were also some slight adaptations to the cap, with our engineers exploring the possibility of using one tool with two cavity moulds that would hit the 1,100 daily required parts as well as keeping the accuracy in place.”

“You can have the right material manufactured in pretty much the way it’s going to be in production,” Hurlstone explains, again referring to a non-emergency development process.

Furthermore, as rapidly tooled parts are suitable for lab testing, engineers can quickly address regulatory and manufacturability concerns, running everything from drop tests to analysis on lever-bend or cap-removal forces and the ease and impact of sterilisation, which is of vital concern for equipment used to treat Covid-19.

A sprint to the finish line

Although racing teams have their own reasons for moving quickly, the rapid pace favoured by Williams and Mercedes bears a close resemblance to the five-day ‘design sprint’ methodology pioneered by Google Ventures, which Hurlstone also believes is one of the most effective frameworks for device developers looking to implement rapid prototyping techniques.

“It puts a real focus on very quickly investigating possible design solutions, really pushing what’s possible even before you have a specification,” he says.

“The ability to have models made to help you with that is invaluable, and the fact you can now do that with 3D-printed parts in one or two days means you can iterate very quickly.

“We, as designers and engineers, can do the CAD during the day, set it to build overnight and come in the next morning to test the parts and repeat.”

Whether or not it’s being used to tackle a global health emergency – UCL, for instance, ran a ventilator ‘design and refine’ sprint alongside its work with Mercedes – that’s a model Hurlstone appreciates.

As the author of an article detailing his quest to engineer “the perfect click” for devices like inhalers and auto-injectors, he’s the kind that likes to focus on the details from the very beginning of a project.

“There’s a sense that you always know what the problem is you’re trying to solve,” he continues, “but sometimes you don’t.”

“You can think, ‘Hang on, if we do it this way, we might be solving a completely different set of technical challenges’, or, ‘Can we even do it the way we hoped?’ These sprints can really help you define the problem.”

That was a serious issue for other aspects of the UK’s push to increase its stock of ventilators as well.

In March, the government asked non-specialist manufacturers and academics to design brand-new equipment, but by April it was apparent that the early specifications for it did not match up to the actual clinical requirements for treating Covid-19.

Indeed, provisional orders for ‘BlueSky’, a ventilator produced by Renault and Red Bull with Essex-based medical device specialists Darwood IP, were cancelled after it proved unsuitable for managing Covid-19 symptoms.

Equally, Dyson failed to fit their emphasis on distinctive innovation between the emergency’s time constraints and medical devices’ stringent regulatory requirements, while the development of ‘OxVent’ by engineers and medics across the University of Oxford and King’s College London was eventually stopped after it became clear the original design would not meet ICU needs.

The UK government was lucky that the country’s otherwise largely idle manufacturing sector was more than willing to help make up the shortfall in ventilators, but enthusiasm plus capacity does not equal production.

Hurlstone’s one concern about the quality of today’s rapid prototyping and tooling techniques is that they might convince manufacturers they’re further along in their development process than is actually the case.

Things change quickly in a pandemic, but that maxim only gets more relevant.

This article originally appeared in Vol. 1 2020 of the Medical Device Developments magazine. The full publication can be viewed online here.