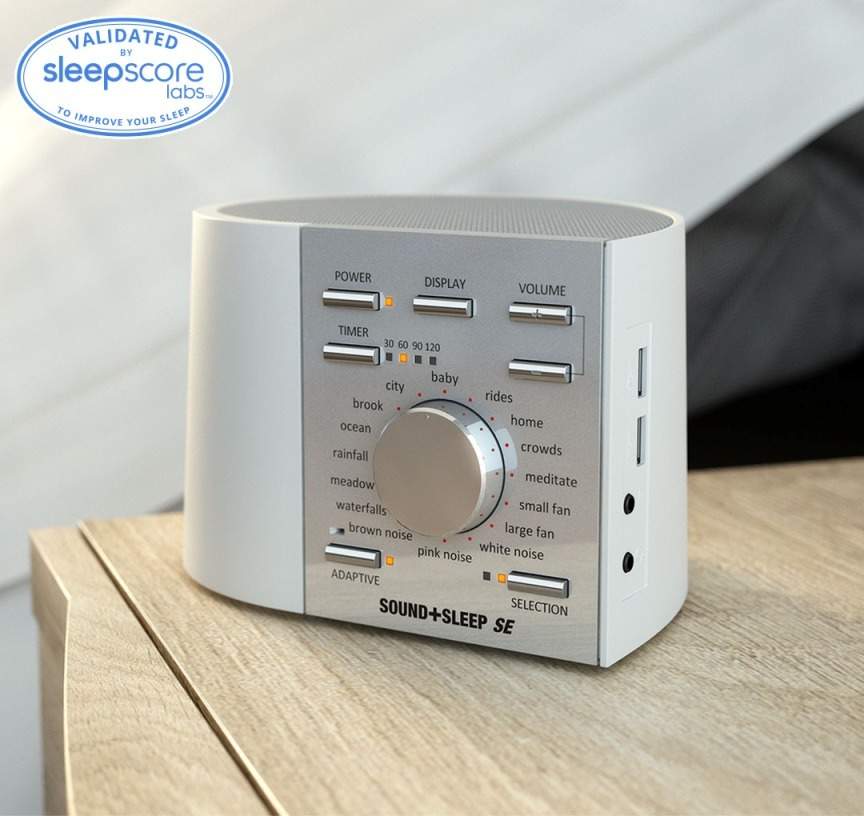 Created by Adaptive Sound Technologies, (ASTI) Sound+Sleep SE is the world’s most advanced sound machine, offering sound profiles scientifically engineered to promote relaxation, renewal and deeper sleep. Users can choose from white, pink or brown noise programs as well as ocean, rain, and other natural sound compositions to block indoor and outdoor noises that can make it difficult to fall or stay asleep.

Sound+Sleep SE also contains patented adaptive sound technology, which uses a built-in microphone to listen to the user’s environment and dynamically adjust the volume based on ambient noise levels.

SleepScore Labs Sleep Science and Scientific Affairs Vice President Roy Raymann said: “Noises at night can have significant impacts on your sleep. Peak noises and unknown sounds might wake you up and make your night restless rather than restorative. We tested the Sound+Sleep SE to determine if the device could contribute to a better night’s sleep for people with mild sleep issues. We found that our Sound+Sleep SE users reported sleeping better and feeling more rested during the day. These results confirm earlier findings that sound masking can positively affect sleep, and that Sound+Sleep SE delivers this benefit.”

To test the potential benefits of Sound+Sleep SE, participants turned the sound machine on at night and tracked their sleep for two consecutive weeks using both SleepScore technology by ResMed and self-reports. Their sleep during this time period was compared to a previous two week period without using the sound machine. All participants had historically experienced difficulty falling asleep or trouble staying asleep through the night. After analyzing 725 total nights, SleepScore Labs found statistically significant improvements in many aspects of users’ perceived sleep. During the nights that participants used Sound+Sleep SE at home they reported the following benefits:

Less Time Awake: 76% increase in ability to sleep through the night without waking up

Feeling More Rested: 46% increase in feeling rested upon waking in the morning

Adaptive Sound Technologies president and CEO Sam Nicolino said: “It is estimated that one billion people worldwide suffer from sleep disorders. In the US alone sleep related issues cost the economy over $63bn dollars per year.

“The findings of the SleepScore Labs study are a testament to the value of our sleep sound innovations. The study results back up over a decade of empirical evidence from users of our top-rated sound machines, and similar positive results should be expected from ASTI’s entire product family.”

In addition to perceived sleep advantages, participants also reported on user experience aspects of the sound machine. The study found that 100 percent of users said the product was easy to use, and 80 percent thought it had good sound quality. The overwhelming majority of users said that they would recommend Sound+Sleep SE to their close friends and family and 89 percent said they would plan to continue to use Sound+Sleep SE following the completion of the study.

Stanford University clinical professor and ASTI adviser Rafael Pelayo said: “I was very happy to review the results of this study. This independent study confirms the clinical impression that people with trouble sleeping may perceive an improvement in their sleep using a quality white noise machine.

“The study showed that the Sound+Sleep SE is another option to help people feel like they are getting better sleep, especially if they are trying to sleep in noisy environments or in environments with variably interruptive noise levels.”